The next big Bay Area earthquake is not a question of “if” but “when.”

The 1989 Loma Prieta quake did more than kill scores of people, injure many more, damage homes and businesses, flatten a portion of Interstate 880 and knock out a section of the original Bay Bridge East Span. 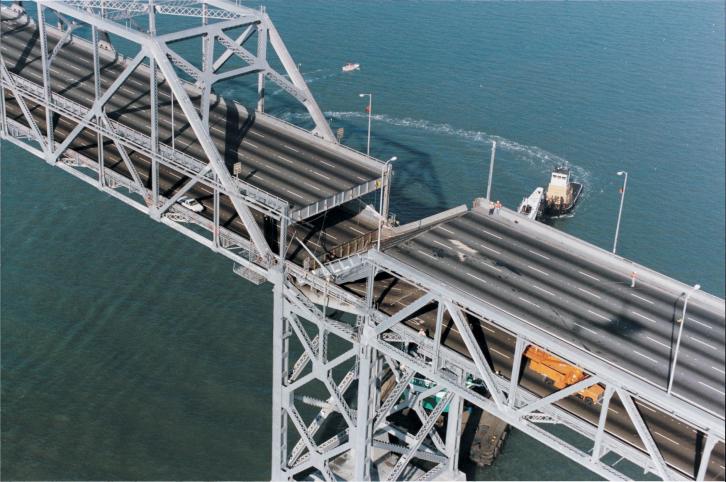 The Loma Prieta earthquake started a race against time — to upgrade our toll bridges to modern seismic safety standards before the next temblor struck.

All seven of the Bay Area’s state-owned toll bridges — plus two more in Southern California — have now achieved seismic safety.

It wasn’t easy.  It wasn’t quick.  And it certainly wasn’t cheap.

Who Picks Up the Tab?

The budget for the Toll Bridge Seismic Retrofit Program now totals about $9.4 billion.

And as toll payers, we are picking up most of the tab.  Three dollars of the $6 regular toll on the seven Bay Area bridges goes to service debt on bonds issued to finance the program.

The 1978 Antioch Bridge and the 1982 Dumbarton Bridge were excluded because they were built to more stringent seismic standards than the region’s older spans.

By 2010, new information about bridges’ performance during earthquakes led state lawmakers to expand the program to include retrofits of the Antioch and Dumbarton bridges.

The Bay Bridge and Benicia-Martinez Bridge are “lifeline” structures, designed to reopen quickly after a major earthquake and with only minor to moderate damage.

Retrofits of the Carquinez, Dumbarton and San Mateo-Hayward bridges involved an “intermediate strategy,” with moderate to major damage expected.

The Antioch and Richmond-San Rafael bridges were retrofitted to a “no collapse” standard.

We are currently reviewing the transportation needs of the Bay Area through the year 2040. Our focus is on preserving the character of our communities and adapting to growth.

MTC promotes Bay Area priorities in Sacramento and Washington, D.C., and helps the region put its best foot forward in the often intense competition for state and federal transportation funding.