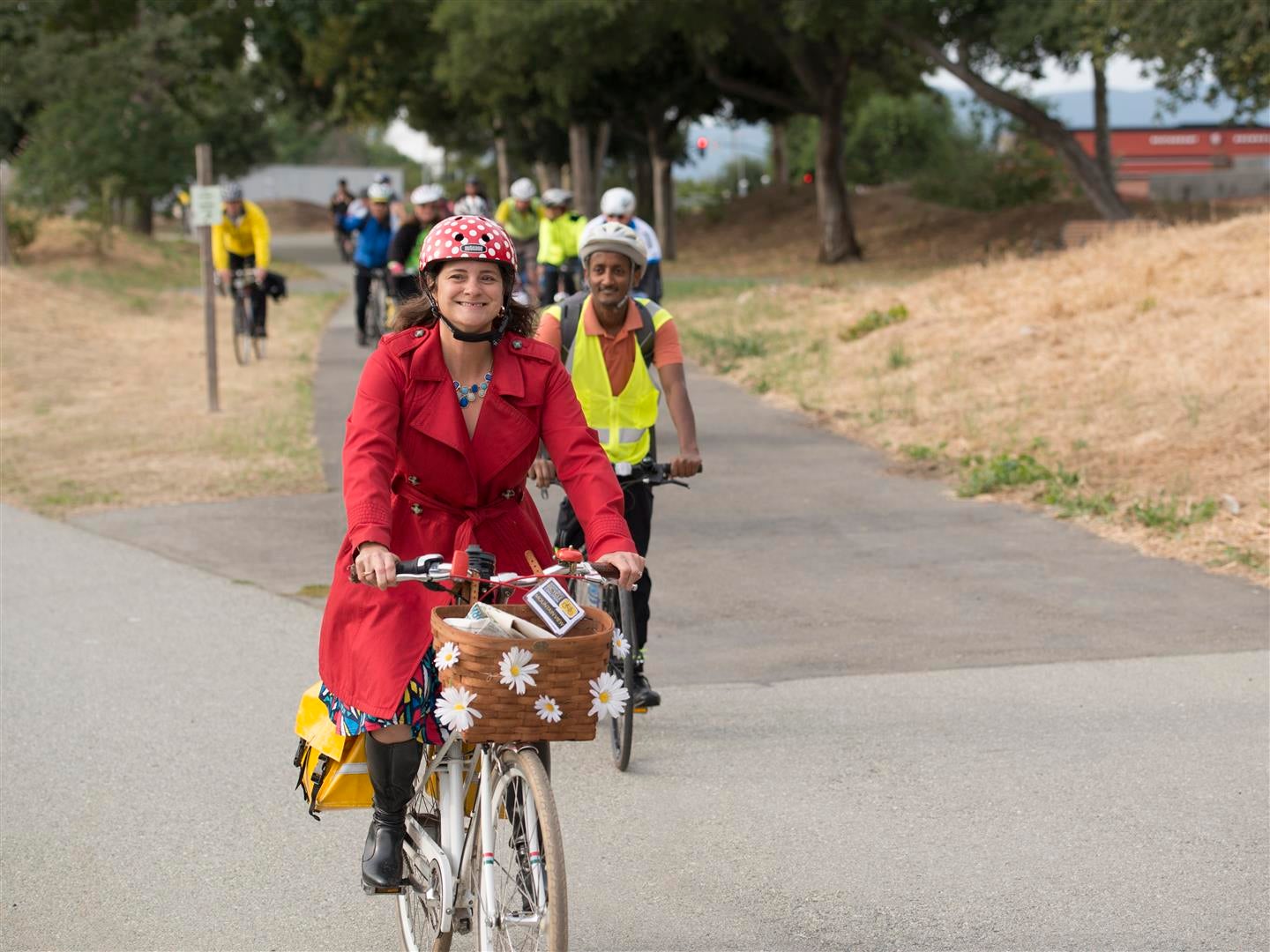 As part of National Bike Month in May, the Bike Commuter of the Year Award recognizes a bike commuter in each county for inspiring others in their communities to ride their bicycles, too.

OAKLAND, CA — One of the Bay Area’s most dedicated bicycle commuters could be massage therapist Liam Casey, who powers through San Francisco’s streets on his bicycle with a massage table attached to the back, providing “massage delivered by bicycle” for the last two and a half years. In Alameda County, Dan Beringhele secured a cargo bike for the Berkeley Public Library and pedals the “Library on Wheels” to school events and festivals, where people can check out books wherever they are. Casey and Beringhele are two of nine 2016 Bike Commuters of the Year, announced this week by Bay Area Bike to Work Day and the Metropolitan Transportation Commission (MTC).

The Bike Commuter of the Year awards recognize individuals who inspire bicycling in their communities through their commitment and their actions. In its ninth year, the award is part of many events scheduled during the San Francisco Bay Area’s National Bike Month celebration this May.

The 2016 Bike Commuter of the Year award winners are:

Each winner will receive dinner for four at Chipotle, a set of lights from Mike’s Bikes, a Clipper card with $20 value and a boxed set of San Francisco Bay Trail map cards from the Association of Bay Area Governments (ABAG). You can read all about the winners at http://youcanbikethere.com/bike-commuter-of-the-year/.

Many of the winners will be honored on Bike to Work Day — the Bay Area’s premier bicycling celebration and the highlight event of Bike Month — on Thursday, May 12.

Presented by the Metropolitan Transportation Commission (MTC), 511 and Kaiser Permanente, Bike to Work Day encourages local residents to try commuting on two wheels for the first time and celebrates those who bike to work regularly. Complete event information, including Energizer Station locations, is available at YouCanBikeThere.com.

Got a Team? Take the Team Bike Challenge!

Because competition can be a great motivator, the Team Bike Challenge and Company Bike Challenge have become essential components of Bike to Work Day and Bike Month. Teams of five — made up of friends, families, coworkers or neighbors — compete for top honors and much-coveted bragging rights by riding hundreds of thousands of miles during May’s National Bike Month.

In 2015, 1,648 teams rode over 500,000 miles and burned almost 23.5 million calories collectively while reducing automobile-related CO2 emissions by nearly 550,000 pounds. The competition began May 1 and runs through May 31. To register, visit teambikechallenge.com.

In addition to MTC (the transportation planning, financing and coordinating agency for the nine-county San Francisco Bay Area), 511 (the region’s traveler information system) and Kaiser Permanente, Bike to Work Day 2016 receives regional support from the Bay Area Air Quality Management District (BAAQMD), Bay Area Rapid Transit (BART), Clear Channel Outdoor, Canary Foundation Challenge and Clif Bar, as well as from many sponsors at the local level. Bike to Work Day’s media sponsor is KPIX. Prizes for the Bike Commuter of the Year winners were donated by MTC, the Association of Bay Area Governments (ABAG), Chipotle and Mike’s Bikes. The event is made possible through the cooperation of thousands of volunteers, MTC, county congestion management agencies, local jurisdictions and local bicycling coalitions.