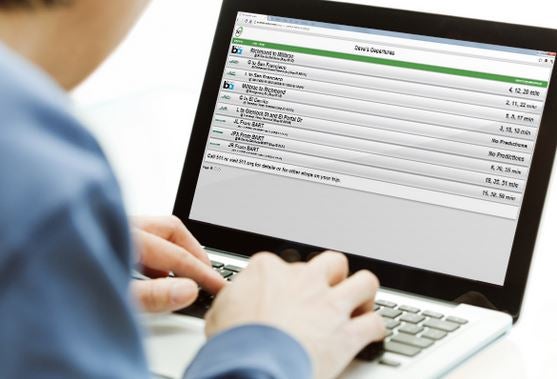 Do you take more than one transit route during your commute? 511 Transit Tracker is a resource for anyone who uses multiple transit services—a reality for most people in the Bay Area. The web-based app aggregates all selected agencies and routes on a single, custom web page for easy comparison, allowing passengers to select the best options — whether catching the bus, jumping on light rail, or riding the train — during their trip.

Transit Tracker is a do-it-yourself tool, in which you can input your daily routes once, and use it every day when you are about to catch a train. The tool generates a unique web address (URL) for that custom page, which can be bookmarked or emailed for display on Internet-connected devices, including desktop computers, laptops, smart phones, tablets and large screens. Transit Tracker is especially convenient for people who make transfers between buses by having all the departure times on one page. At the office, Transit Tracker is also designed to display on large screens in the lobby to let people know the departure times of nearby transit routes to help people plan ahead and minimize time lost waiting at the stop.