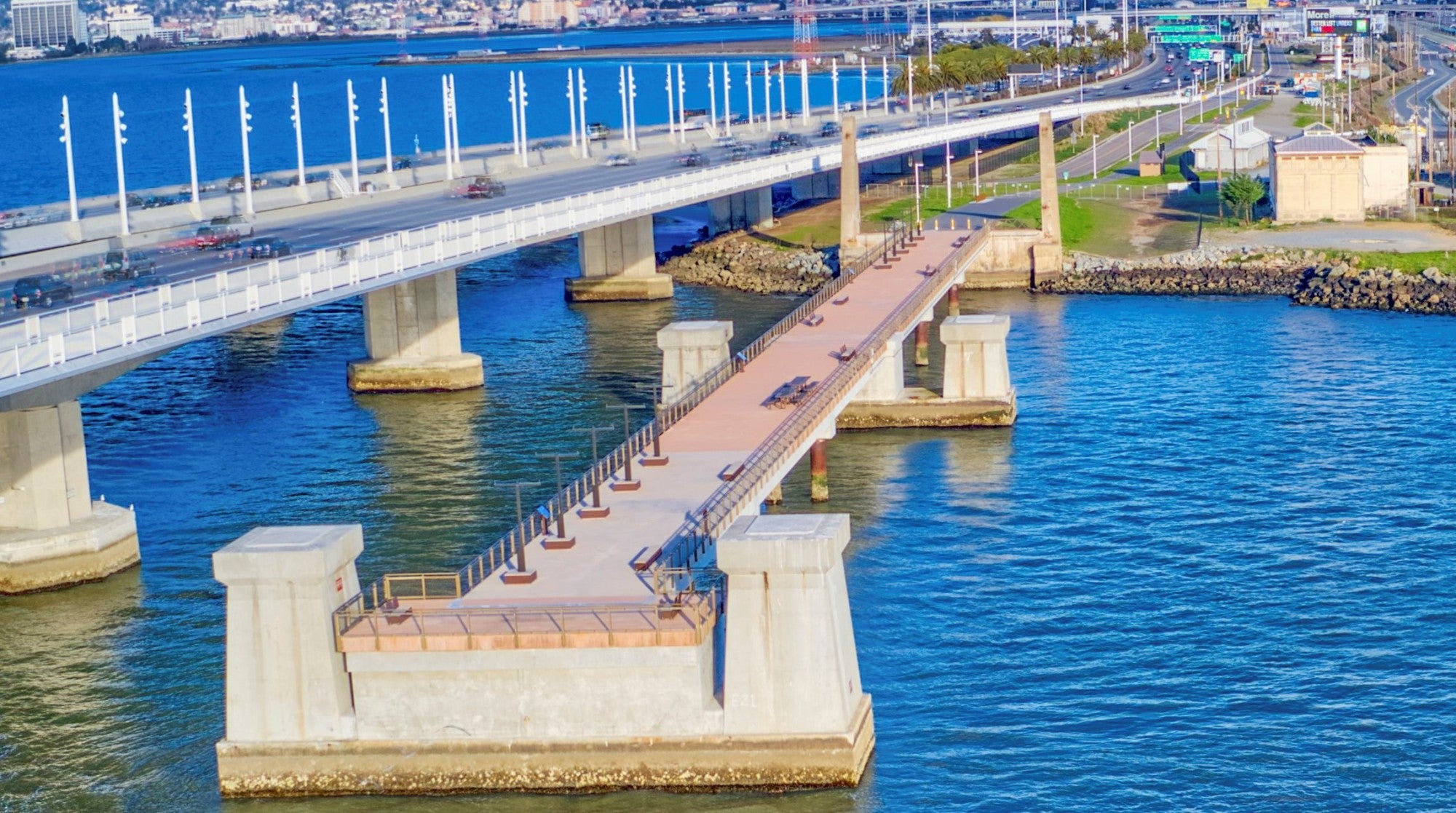 A sparkling, new shoreline public park near the Bay Bridge in Oakland was dedicated Wednesday, the project brought to fruition with help from the Bay Area Toll Authority (BATA).

BATA contributed millions of dollars for development of the park, and the decision to retain the old bridge piers was approved by the Toll Bridge Program Oversight Committee, which completed its work last year. Former MTC and BATA Executive Director Steve Heminger served as a member of the committee throughout its 2005-19 existence.

In addition to the observation deck, a 24,000-square foot 1930s-era electric train maintenance building known as the Bridge Yard has been renovated to host large concerts, community events, and public concessions. Running the length of the park is a bicycle/pedestrian path that connects to the Bay Bridge Trail, linking the park with Yerba Buena Island. Bike parking is available adjacent to the observation pier, which is open from 5 a.m. to 10 p.m. daily. Other visitor amenities include bathrooms, walking paths and interpretive panels. The park is expected to be a popular tourist destination with its sweeping views of the bay and easy access to the Bay Bridge Trail. It’s been dubbed as the “Gateway to the East Bay” due to its visibility to eastbound Bay Bridge drivers.

“From the bicycle/pedestrian path to restoring the historic Bridge Yard building to preserving foundations from the original Bay Bridge East Span to establish the new access pier, BATA is proud of the investments it has made to make the new park – and the bay itself – more accessible to all the people of the Bay Area,” said Orinda Vice Mayor and BATA member Amy Rein Worth, who chairs MTC’s BATA Oversight Committee.

The park was named for Sutter, a civic and environmental leader, and former East Bay Park District Board Member who saw the potential for a future waterfront park in the 1960s while the area was still active as the Oakland Army Base. Sutter first proposed the park in a 1967 letter to the Association of Bay Area Governments.

The site has a long history. From 1903 to1960, it served as the base of operations for the electric railway Key System that transported passengers around the East Bay and from 1936 to 1958 across the lower deck of the Bay Bridge to San Francisco. A substation located at the site provided electrical power to Key System trains. The Oakland Army Base served as a transportation port and distribution terminal for the Pacific from 1941 until 1999.

The park's opening is the culmination of decades of regional collaboration and the Park District’s long-time efforts to reclaim shoreline for public use and habitat preservation. A nine-member multiagency working group facilitated the park. In addition to BATA, Caltrans and the East Bay Parks District, the group also includes the Association of Bay Area Governments (ABAG)'s Bay Trail Project, the San Francisco Bay Conservation and Development Commission (BCDC), California Transportation Commission (CTC), City of Oakland, Port of Oakland and the East Bay Municipal Utility District (EBMUD).