Over 5,000 online comments, nine public workshops, and dozens of stakeholder meetings have informed proposed bike share station locations. Stations will be planned and deployed in phases. 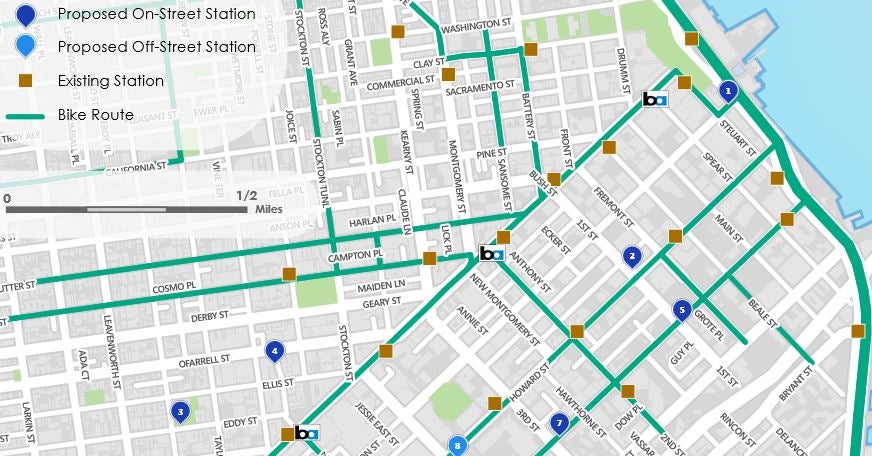 Motivate, in partnership with MTC, announced proposed Bike Share locations in San Francisco and San Jose based on suggestions made online and at local meetings.

OAKLAND, CA — Motivate and the Metropolitan Transportation Commission (MTC) announced a new major milestone toward the expansion of bike share in the Bay Area today. Motivate has published maps showing the proposed locations of new San Francisco and San Jose bike share stations that will make up the first phase of the system’s tenfold expansion. Locations have been identified for 72 new stations in Supervisorial Districts 6, 8, and 9 in San Francisco, and 13 new station locations have been identified in San Jose.

“This first phase of expansion alone will triple the size of our successful and popular bike share pilot. We’re looking forward to working with Motivate and our regional partners to grow the system citywide and bring the joy of bike sharing to all San Franciscans,” said Ed Reiskin, San Francisco Municipal Transportation Agency (SFMTA) Director of Transportation.

"San Jose is excited to partner with Motivate and expand our existing Bay Area Bike Share system,” stated Jim Ortbal, San Jose's Director of Transportation. “Bike share expansion in the greater downtown area will leverage our extensive network of bikeways to strengthen the connections between transit, jobs and housing, and enhance San Jose as a great place to live, work, and play."

The proposed locations for the first phase of the Bay Area’s bike share expansion were selected using feedback gathered from a process that included over six months of public input into the system’s design. The public input process to date has included nearly 70 briefings with community stakeholders, nine public workshops, and over 5,000 unique station location suggestions submitted through an online station-suggestion portal. The service area for this first phase of the expansion was carefully chosen and grows outward from the existing bike share systems in San Francisco and San Jose, which launched as part of a pilot program with 700 bicycles in 2013.

In each city, expansion will start in downtown areas, where high concentrations of residents live or travel for work and pleasure, and will incrementally expand outward to surrounding neighborhoods. As part of the tenfold expansion, Motivate has also committed to siting at least 20% of all stations in MTC-designated Communities of Concern, and this first wave of new locations already exceeds this goal.

“Over the last several months, we’ve worked closely with communities across San Francisco and San Jose to map out new bike share stations for the first phase of our expansion,” stated Emily Stapleton, General Manager of Bay Area Bike Share. “We have heard tremendous demand for expanded bike share in San Francisco and San Jose, and the proposed station locations released today reflect the input we received from residents about places where bike share can help connect their communities.”

Motivate, the nation’s largest bike share operator, under an agreement with the MTC, the transportation planning, financing and coordinating agency for the nine-county San Francisco Bay Area, will bring this expansion at no cost to taxpayers. The program will be supported by sponsorship, similar to New York City’s Citi Bike program, which is sponsored by Citi. Following the completion of the expansion, the Bay Area program will be the second largest bike share system in the U.S.

“Bike share is a key element in the future of our regional transportation network,” said Dave Cortese, chair of MTC. “It allows individuals a convenient and affordable option for short trips and helps make last mile connections to and from public transportation. We’ve seen great success with the pilot program in San Francisco and San Jose, and we’re excited to build on that as the program expands to new communities and additional cities.” Cortese is also president of the Santa Clara County Board of Supervisors.

The expansion will take place in phases over the course of two years, growing the existing systems in San Francisco and San Jose and bringing bike share to Oakland, Berkeley, and Emeryville for the first time. Motivate is expected to announce the first phase of bike share station locations for Oakland, Berkeley and Emeryville in the coming weeks. This first phase of expansion will add more than 1,000 bikes to the current network, more than doubling the amount of bikes on the road.

Specific locations were chosen through a process that coupled feedback from the online station-suggestion portal and extensive public consultation in the neighborhoods where the expansion will take place, along with a technical assessment of site suitability. The best locations for bike share have features such as high visibility, proximity to bicycle facilities, co-location with other transportation connections, and/or proximity to local destinations like parks, commercial districts, or other major destinations that attract large numbers of Bay Area residents. Bike share systems thrive when stations are placed close to one another, typically no more than a five-minute walk.

Motivate will work with partners in each of these cities — SFMTA and the San Jose Department of Transportation — to permit the station sites for the first phase of the expansion. Should planning efforts and final approvals proceed according to plan, bicycles for the first phase of expansion could arrive before the end of the year. The entire tenfold expansion across the Bay Area is expected to be completed by 2018.

Bay Area Bike Share is a quick, convenient, and affordable way to travel around the Bay Area. The system is growing from 700 to 7,000 bikes by 2018, and expanding into the East Bay. Bay Area Bike Share is operated by Motivate, a global leader in bike share. Motivate manages all of the largest bike share systems in the United States and many of the largest systems in the world, including Citi Bike (New York and Jersey City), Divvy (Chicago), CoGo Bike Share (Columbus, OH), Capital Bike Share (Washington, D.C.; Arlington and Alexandria, VA; and Montgomery County, MD), Hubway (Boston, Somerville, Cambridge and Brookline, MA), Pronto (Seattle), Bike Chattanooga (TN), Bike Share Toronto, and Melbourne Bike Share in Australia. Motivate has been selected to operate a new system in Portland, Oregon that will launch in the summer of 2016. Learn more about Bay Area Bike Share at bayareabikeshare.com.