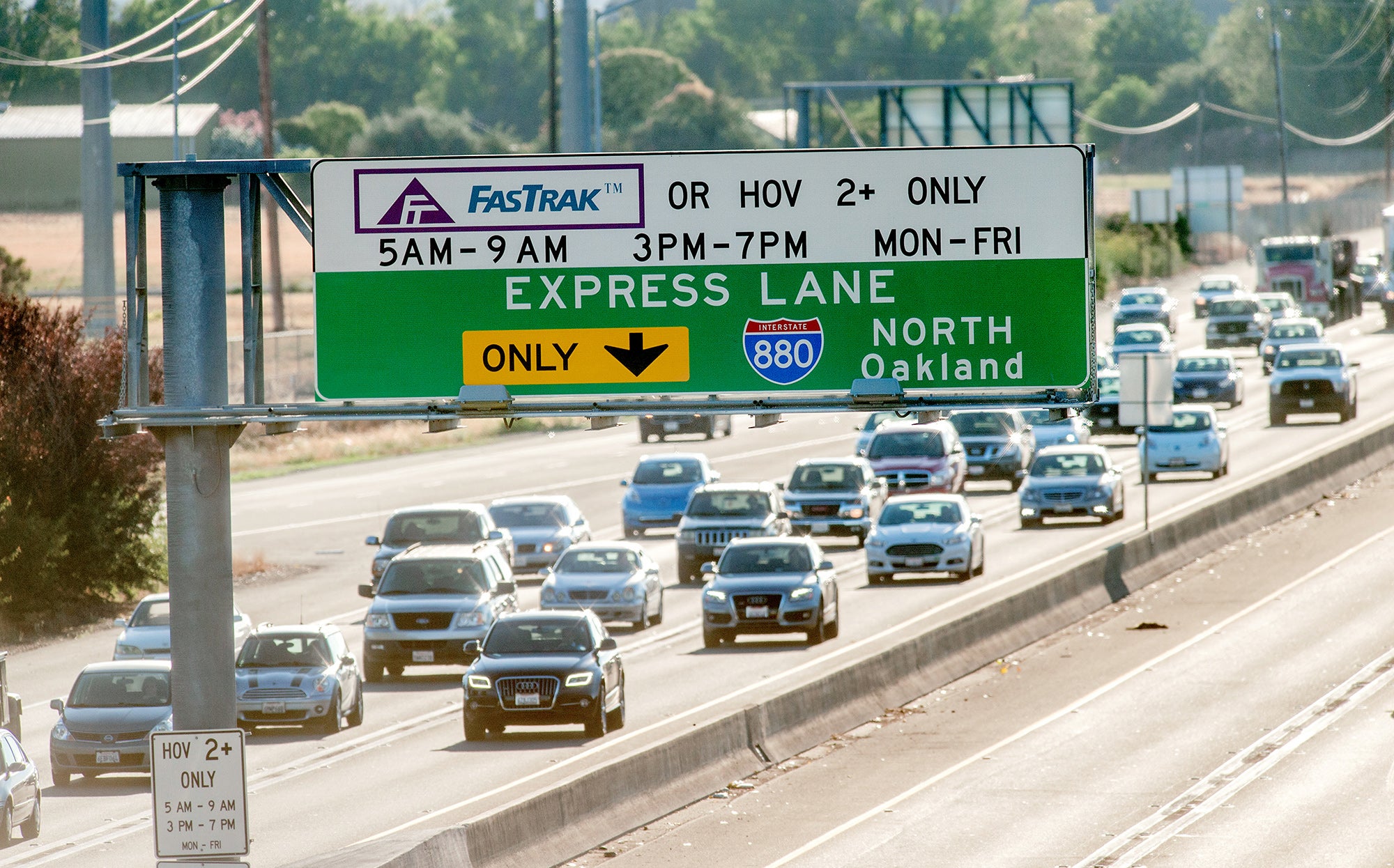 Beginning this fall, solo motorists on Interstate 580 through Dublin, Pleasanton and Livermore can cruise in the carpool lane if they’re willing to pay their way out of congested lanes. Existing high-occupancy vehicle (HOV) lanes on many Bay Area highways, including the Tri-Valley corridor, are being converted to express lanes, specially designated highway lanes that are free for carpools and other toll-exempt vehicles, but also allow solo motorists to choose to pay tolls for use of the lane. The toll varies depending on congestion levels.

An express lane is already available on Interstate 680 southbound from Sunol to Milpitas. “The lane has been a success since its inception,” said Art Dao, executive director of the Alameda County Transportation Commission (Alameda CTC). “Not only does it provide benefits for lane users—the lane has seen more than 2 million toll-paying trips—but general-purpose lane users have consistently benefitted from improved throughput and increased speeds.” Another express lane continues from Milpitas to San Jose on State Route 237. Alameda CTC and the Santa Clara Valley Transportation Authority (VTA) partnered with MTC to develop these express lanes.

“VTA is currently working on extending express lanes on State Route 237 to the west near US 101 to offer this more reliable option for commuters coming to our major employment hubs,” said Brandi Childress, VTA public information officer. “The expectation for opening this phase is early 2017 with a third phase that involves extending express lanes to State Route 85 a year or so later.”

Next in line for conversion, following the scheduled fall opening of the express lanes along the I-580 Tri-Valley corridor, is Interstate 680 between San Ramon and Walnut Creek, in both northbound and southbound directions. A first for Bay Area express lanes, these two projects will feature mostly open access. Similar to existing carpool lanes, drivers will be able to enter or exit anywhere along the express lane for all of the stretch of I-680  (about 12 miles in each direction) and most of the I-580 lanes.

How does it all work? Tolls are collected electronically via FasTrak® and are only charged during the express lane hours of operation as posted on the freeway. Some express lanes operate all day, like I-680 over Sunol Grade, while others will operate during commute hours only, similar to existing HOV lanes. Overhead electronic signs will display the toll rates. As traffic increases, tolls increase and as traffic decreases, tolls decrease.

With the opening of the I-580 express lanes this fall, a change is coming to how carpools and other eligible vehicles will receive toll-free travel. On today’s established express lanes on I-680 and SR-237, toll-exempt vehicles do not need FasTrak, and if there is a FasTrak tag in the car, drivers need to put it in a Mylar bag to avoid being tolled. On the I-580 express lanes, toll-exempt vehicles will need a new FasTrak Flex tag to travel toll-free. FasTrak Flex has a switch that can be set in one of three positions to indicate that the vehicle has one, two, or three or more occupants and to collect the corresponding toll amount. When set on the 1 position, the posted toll amount will be deducted from the FasTrak account. Solo drivers in any of the express lanes can use either regular FasTrak toll tags or FasTrak Flex tags. When set on 2 or 3+, the tolling equipment will recognize that the driver need not pay a toll. The benefit of FasTrak Flex tags to carpoolers is to improve enforcement and keep scofflaws from clogging the lanes. FasTrak Flex tags will become available in the Bay Area in summer 2015.

“MTC, Caltrans and CHP often hear concerns that solo drivers use the carpool lanes and don’t get caught,” said Lisa Klein of MTC. “The Flex tags support enforcement, because any express lane user without a FasTrak tag will be charged a violation in the future, unlike today where they travel for free. We know that really irks today’s carpoolers.”

Following the 580, 680 and 237 projects, about 51 miles of existing HOV lanes along Interstate 880 between Oakland and Milpitas also will be converted to express lanes along Interstate 880. In addition, final project and environmental approval for the 14-mile I-680 San Jose to Sunol northbound HOV/express lane, which will complement the existing southbound lane, is expected this fall.

These projects are part of a larger program to develop a total of 550 miles of Bay Area Express Lanes by 2035. MTC will operate 270 miles of the express lanes, converting 150 miles of existing carpool lanes to express lanes and later adding 120 miles of new lanes to fill gaps. Conversion projects involve striping lanes, upgrading California Highway Patrol observation areas, and installing gantries, signs, FasTrak toll tag readers and traffic-monitoring equipment. A full map of all projects and their schedules can be viewed at BayAreaExpressLanes.org.

“The success of Alameda CTC’s I-680 southbound HOV/express lane demonstrates that increasing the efficiency of our existing infrastructure by using available HOV capacity improves travel reliability and travel times in all lanes on the corridor,” said Alameda CTC Executive Director Art Dao. “I’m pleased that we will be providing a new choice for drivers along the I-580 corridor in the Tri-Valley with the opening of 14 miles of I-580 HOV/express lanes there this fall. Drivers will be able to easily get into and out of the lanes, and to and from local exits, as they are designed with near continuous access—meaning they will look very similar to HOV lanes that drivers are accustomed to using.  By overwhelmingly supporting our local sales tax for transportation—Measures B and BB—Alameda County voters have said yes to increased transportation choices and I’m glad to be delivering express lanes as promised.”

“Since the opening of our first express lane operation on SR-237 in 2012, we have seen great results in travel time savings and managing congestion in this heavily traveled corridor,” said Brandi Childress, VTA public information officer. “We are also exceeding revenue projections, which provides another funding stream for transportation improvements. Express lanes provide long-term mobility benefits and another solution to help combat the ever-growing demand being put on our roadways that we cannot build our way out of.”