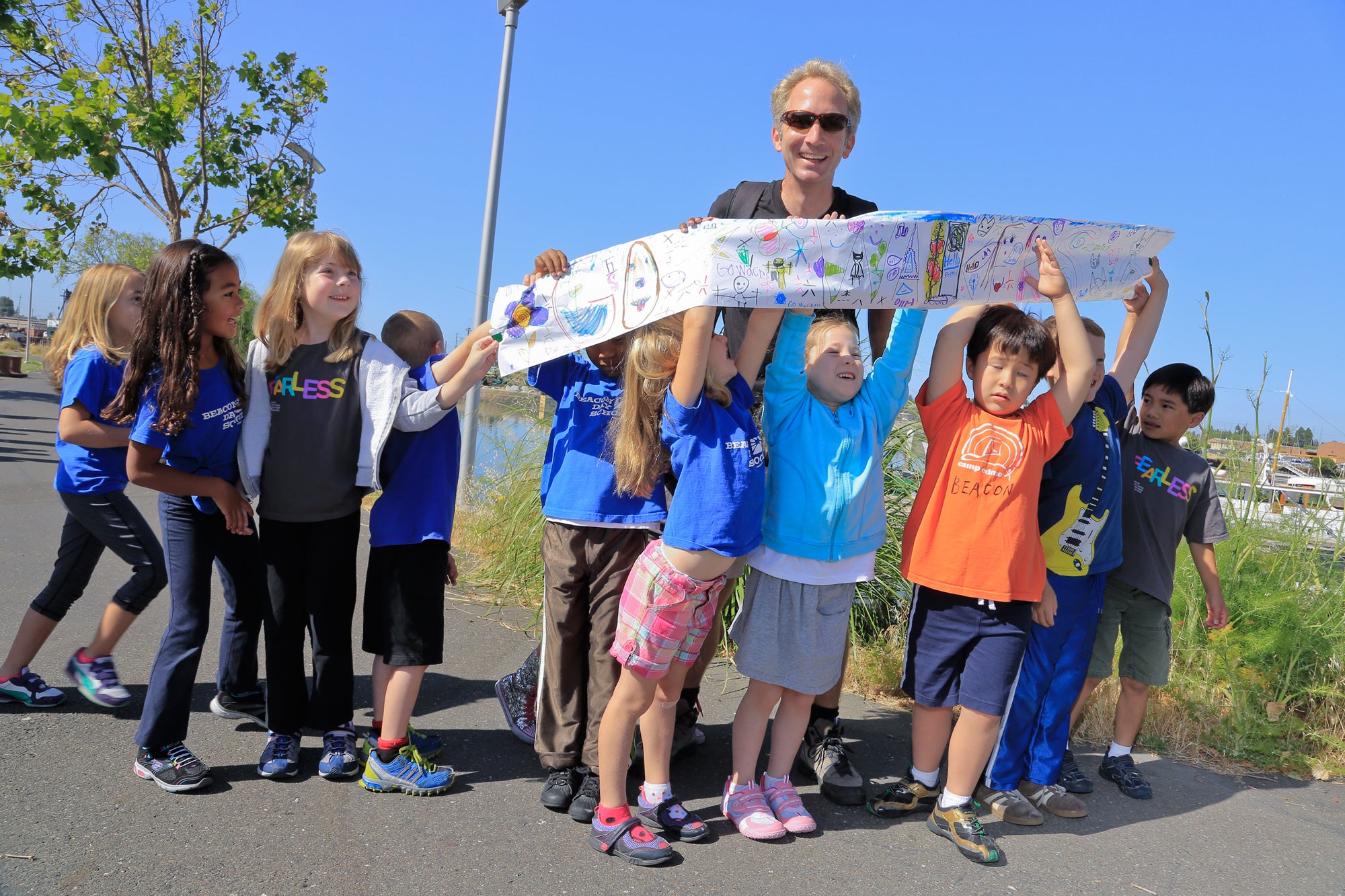 Beacon Day School students proudly display their artwork in support of the Bay Trail; Kurt Schwabe pauses for a photo op with the kids before resuming his 30-day trek around the San Francisco Bay.

Kurt Schwabe’s quest to promote the Bay Trail by circling the San Francisco Bay on foot in 30 days this month is gaining momentum. Each day he meets someone new, from a TV news reporter he met in San Rafael to a naturalist in Richmond to a pair of Bay Trail enthusiasts who took Schwabe on a guided tour of the Albany Bulb with its display of sculptures made out of found materials. This morning, as he trekked along the Oakland Estuary near Embarcadero Cove, he was cheered on at Union Point Park by 75 pre-kindergarten through fifth-grade students from Beacon Day School, located just a short distance away. It was a beautiful morning for their mini-fieldtrip, with seagulls swooping and screeching over the water as the kids, holding hands, walked in twosomes along the trail past gently rocking boats and a huge rusted anchor. Near a statue dedicated to Oakland’s famous women, the children gathered to greet Kurt, proudly carrying their hand-illustrated banners and signs.

“Go Kurt!” read one sign, while another said “Bay Tail Walk,” with a red “R” inserted to correctly spell “Trail.” A group of children paused for a photo op, holding up the Bay Trail banner they’d drawn, while a teacher, megaphone in hand, led everyone in some cheers for Beacon, the Bay Trail and Kurt.

Kurt then took the megaphone and told the kids how he loved to play outside and hike when he was their age. “You’re so lucky to have this trail right out the door of your school,” he said.

After the short break, Kurt shouldered his backpack and resumed his day’s trek. The school-kids, inspired by Kurt’s energy and enthusiasm, began to run after him, but teachers called them back with promises of a lemonade stop before taking the trail back to Beacon. Now nearly at the halfway mark of his 300-mile goal, Kurt blogs about each day’s experiences at walkingthebaytrail.com, also posting photos.
— Georgia Lambert