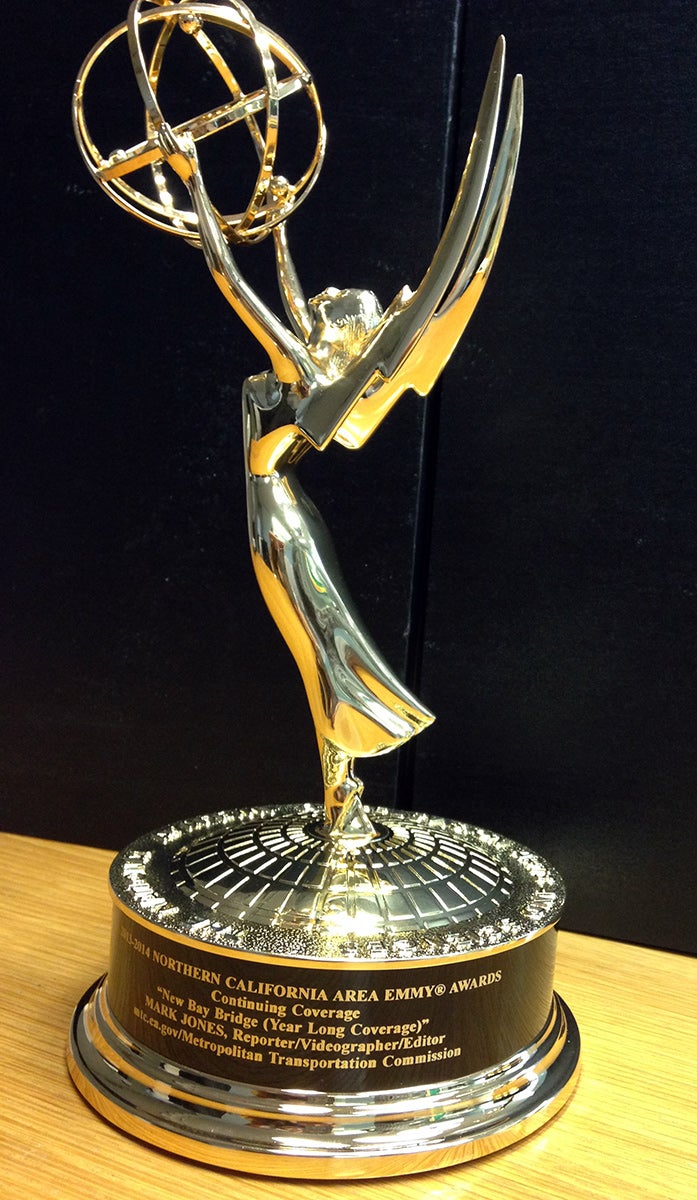 Two people on MTC’s creative team have won a prestigious Emmy Award from the National Academy of Television Arts & Sciences — (NATAS) – San Francisco/Northern California Division for their work on a series of videos in 2013 chronicling the final construction on the new Bay Bridge East Span and the dramatic lead-up to the span’s opening on Labor Day 2013. Veteran newsman Mark Jones, who has been MTC’s resident video journalist since 2011, and MTC Graphic Artist David Cooper won in the category of “Continuing Coverage.” This is the 7th Emmy for Jones, who crawled, climbed and walked on, through and on top of the under-construction and newly opened span to get the story time and again, editing his footage into tight, informative and entertaining packages under extreme deadline pressures. In all, Jones produced more than two dozen bridge-related videos in 2013, including several in which he recreated the newsreel style of the mid-20th century. Cooper produced a variety of graphic elements that helped tell the story, also under tight deadlines.

Prior to coming to MTC, Jones worked as a video journalist for KRON-TV for 24 years.

“We’re extremely lucky to have a videographer of Mark Jones’ caliber, experience and speed on our staff to translate the complex engineering behind this monumental project for the public,” said Randy Rentschler, MTC’s director of Legislation and Public Affairs. “And the professional and appealing look of these videos is due in no small part to David Cooper’s graphics.”

The Emmy Awards recognize excellence in the television industry, and correspond to the Academy Awards (for film), the Tony Awards (for theater) and the Grammy Awards (for music). San Francisco/Northern California is one of 20 chapters awarding regional Emmy statuettes. Northern California embraces media companies and individuals from Visalia to the Oregon border and includes Hawaii and Reno, Nevada. Entries were aired during the 2013 calendar year. This year 659 English and 101 Spanish entries were received in 63 categories. English and Spanish language entries were judged and scored separately. A minimum of five peer judges from other NATAS chapters scored each entry on a scale from 1 to 10 on content, creativity and execution. Each winner receives the Emmy statuette, depicting a winged woman holding an atom. Designed in the 1940s, the trophy is intended to support and uplift the art and science of television. The name Emmy links back to a piece of electronics in early televisions, the image orthicon tube, or immy.