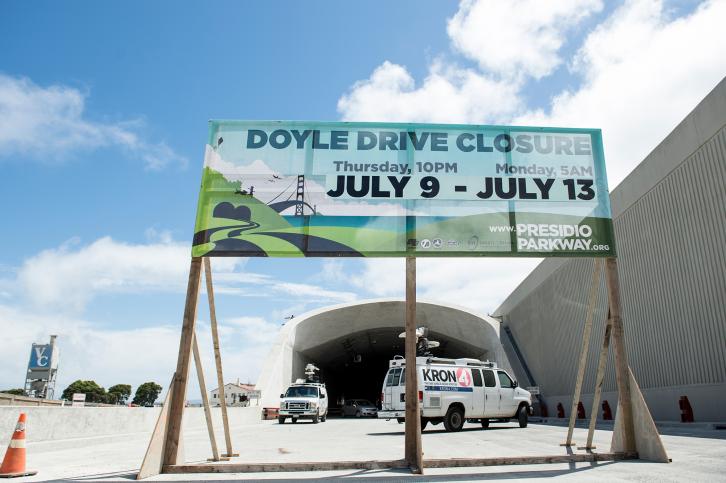 San Francisco’s Doyle Drive will shut down for nearly four days this weekend, making travel to and through the Golden Gate Bridge difficult. Molly Graham, spokeswoman for the nearly $900 million project to transform Doyle Drive into the Presidio Parkway, has a few words of advice for the traveling public: “Stay away, especially on Friday — it’s going to be a mess,” she said during a media tour this past Tuesday. “If people can avoid these roads, please do.”

The Doyle Drive/Presidio Parkway roadway is a busy artery that hugs San Francisco’s northern waterfront and serves as a key connector to the Golden Gate Bridge. While a major inconvenience, this weekend’s traffic hassles are a small price to pay for the final prize: a seismically safe 1.6-mile roadway that will complement the Presidio’s lush natural environment while affording panoramic views of the Bay. Come Monday morning, June 13, traffic will be completely rerouted to the new facility.

Built in conjunction with the Golden Gate Bridge in the 1930s, the original Doyle Drive was not only a visual blight on the natural landscape, it also was seismically shaky. Whereas the old Doyle Drive carved its way through the Presidio on a largely elevated structure, the new facility features a lower profile along much of its route, and is partially submerged in two sets of tunnels with a total of four bores. The tunnel roofs are slated to be landscaped and turned into parkland, enhancing a setting that is part of the Golden Gate National Recreation Area.

Now in its sixth year of construction, the project has been opened in stages, with the first phase — including demolition of the old Doyle Drive, and construction of one of the tunnel bores and a temporary bypass — being completed in 2012. The closure this weekend will allow crews to deactivate the bypass and reconfigure traffic to flow through a series of new viaducts and three new tunnel bores. The fourth bore, which has done double duty by carrying both directions of traffic for a couple of years, will be reconfigured to carry a single direction. Crews will have to break through barriers and lay large swaths of rebar, concrete and asphalt, then stripe the lanes, all under tight time constraints.

Plans call for work to wrap up by 5 a.m. on Monday, and for officials and contractors to gather at 10 a.m. that morning for a ceremonial ribbon cutting and celebration. On hand will be representatives of MTC, which provided $104 million for the project, the bulk of that from bridge toll money.
— Brenda Kahn