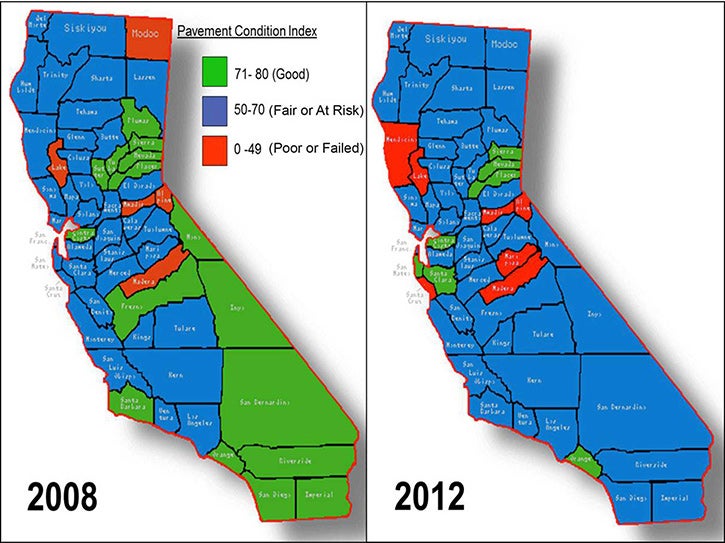 Eighty-seven percent of counties in the state have pavement conditions of "fair" or worse.

Opening the hearing with an overview of state transportation needs, State Transportation Secretary Brian Kelly said an assessment conducted by the California Transportation Commission revealed a 10-year statewide transportation funding shortfall in excess of $295 billion. Kelly advocated for a “fix-it first” policy approach where the state would prioritize preservation of the existing system over expansion.  “It’s difficult to make the case to folks that we should build new things when we’re struggling to fix the things we do have,” Kelly said.

Heminger said both maintenance and expansion are crucial and currently unattainable. “We have a growing state with an aging infrastructure, which means we’re dealing with aging pains and growing pains at the same time,” he said. “And we don’t have nearly enough resource to deal with it.”

California’s urban interstates are the most congested in the nation, according to the California Senate. The highway system is ranked 47th in the nation in efficiency and performance, and the majority of California counties have an average pavement condition rating of “at risk.” By 2022, a quarter of local roads are projected to be “failed.”

“California has transportation needs,” said state legislative analyst Jessica Peters. “Anyone who is sitting in traffic congestion or driving over a pothole understands that.”

Kelly said a gasoline excise tax is an ironic source of funding, because the state is trying to encourage motorists to drive cleaner vehicles — and for the first time in history, Californians are beginning to purchase less gasoline. Heminger added that state legislators have been unwilling to raise the tax.

The cap-and-trade program, established by Assembly Bill 32 in 2006 in hopes of reducing carbon emissions in the state to 1990 levels by 2020, was mentioned at the hearing as a potential supplemental transportation funding source in upcoming years. The program places a “cap” on emissions from major polluting entities and allows them to buy and sell their emission allowances.  In fact, Plan Bay Area is funded in part by an anticipated $3.2 billion in cap and trade revenues.

Kelly and Heminger both pushed for the immediate development of a new funding source dedicated exclusively to transportation.

“What we’ve lacked in the last 10-15 years is a strong source of funding for transportation that does not compete with the General Fund,” Kelly said. “We need to find a new long-term stable source going forward.”
“We have been given a transportation system that not too long ago was second to none in the world,” Heminger said. “I think we are running the risk now of handing that system over to our grandchildren in this shape. Is that the legacy we want to leave to our grandchildren? I don’t think it has to be.”