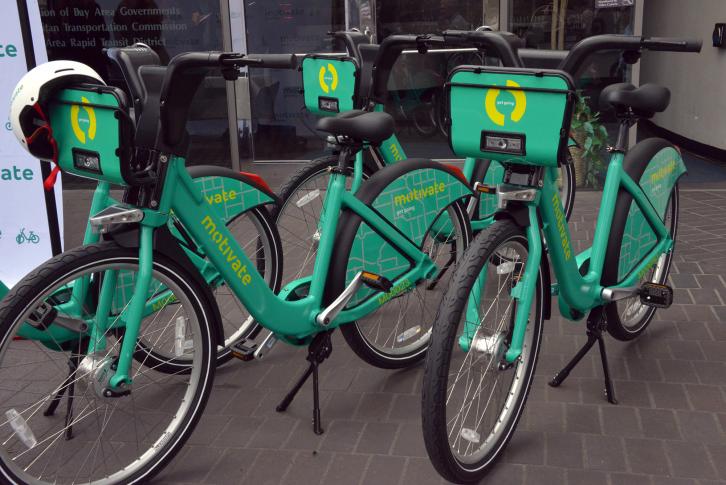 The star of today’s press conference at the MetroCenter was arguably Motivate’s new bike share bike, which will be rolled out first in New York this summer before coming to the Bay Area with the initial wave of expansions here in the summer of 2016. Several shiny, brand-new prototypes were on hand at the event, and the media were encouraged to take them for a spin.

Motivate hired renowned bicycle designer Ben Serotta, whose team worked with bike share programs across the U.S. to make the ideal machine for heavy use in all terrains and weather conditions by a variety of users. “We set out to build a new generation bike that would feel the same (as current Motivate bikes), but that would be even more reliable and easier to maintain, and a little lighter,” said Motivate President and CEO Jay Walder. “We want to keep then on the streets, and not in our repair shops.”

Whereas New York’s new bikes will have three gears, the next gen Bay Area model will feature five handlebar gears in deference to the region’s often hilly terrain. While this is fewer than current Bay Area bikes’ seven gears, Walder said that the new model is equal in terms of ability to climb hills and maintain control on descents.  A front basket is built in, along with integrated front and rear lights.

The lightness was achieved in spite of installing more durable and higher quality gears, cables, seats, tires and other parts, Walder noted.

The bikes on display today sported Motivate’s logo and color scheme, but the ones actually deployed in the Bay Area will tastefully advertise a corporate sponsor. According to Walder, Motivate has already been contacted by several potential sponsors who are attracted by the values that bike sharing represents, from wellness and fitness to environmental protection.  — Brenda Kahn