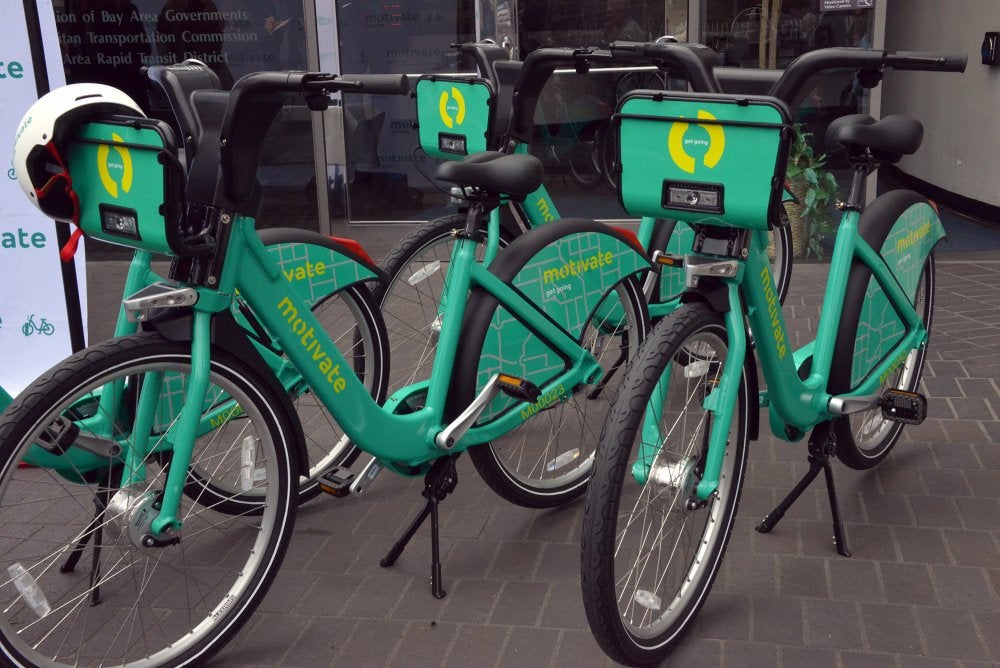 Bike sharing will expand tenfold in the Bay Area under a plan approved unanimously by the MTC Commission today. The augmented program would continue bike sharing in the current participating cities of San Jose and San Francisco while also for the first time bringing bike sharing across the Bay into the East Bay cities of Berkeley, Emeryville and Oakland. The agreement with the private provider, Motivate, also allows for future expansion beyond these five cities.

The expansion plan would increase the current fleet of 700 bikes to 7,000, making this the second largest bike share program in the nation. At a press conference following the Commission action, Motivate unveiled the next generation of bike share bicycles, which are specially built to withstand the elements and heavy use on all terrains (see sidebar). Motivate also introduced an online portal where residents can recommend locations for new Bay Area Bike Share stations, at suggest.bayareabikeshare.com.

Under the public/private arrangement, the 7,000 bike program will operate with no financial support from the public sector, relying instead on member/use fees and sponsorships. In addition, MTC is committing $4.5 million for capital costs involved with operating bike sharing in emerging communities beyond the five cities included in original Motivate proposal.

“We’re talking about creating the second largest bike sharing program in the U.S., and it’s going to happen fast,” said Jay Walder, president and CED of Motivate, who flew in for the event. “It’s not just a form of transportation, it puts a smile on people’s faces.”

The agreement with Motivate calls for increasing San Francisco’s fleet to 4,500 bikes (from a current 328), and San Jose’s to 1,000 bikes (from 129 currently). Another 1,400 bikes would be deployed to the East Bay — 850 in Oakland, 100 in Emeryville and 400 in Berkeley — with the placement of an additional 150 to be determined. Plans call for installing at least a quarter of the bikes by June 1, 2016. The remainder would be phased in, with the system complete by November 1, 2017. East Bay cities would see build out by the end of 2016. Participating cities could invest in additional bikes beyond these numbers.

Three West Bay cities that were part of the original pilot program but not included in Motivate’s expansion plans — Redwood City, Mountain View and Palo Alto — have the option to continue to participate under separate agreements with Motivate. For the near term, Motivate will cover the costs through December 2015, and MTC will pick up the tab through June 2016. Other cities in the region that want to participate in the regional bike share system can develop a service agreement with Motivate using their own sources of funds, according to a preset price, with the ability to secure sponsorships to cover the costs.

An annual pass for Bike Share will start at no more than $149, with future adjustments pegged to inflation. Low income Bay Area residents will be eligible to purchase an annual pass at just 40 percent of the standard rate. Also in the area of equity, Motivate is required to place a minimum of 20 percent of its docks and bikes in communities of concern. As part of the siting process, Motivate will work with cities on community engagement. Overall management of the program will transfer from the Bay Area Air Quality Management District to MTC.

MTC and the Bay Area Air Quality Management District launched Bay Area Bike Share as a publicly funded pilot project in August 2013, with 700 bikes at 70 stations in San Francisco, Redwood City, Palo Alto, Mountain View and San Jose. Motivate won the concession to operate the pilot system in a competitive bid in 2013. To date, more than 550,000 trips have been taken with more than 1 million miles pedaled. Motivate currently operates 17,000 bike share bikes in 10 metro areas across the U.S. and in Canada and Australia, which amounts to a 70 percent market share. For more information, go to motivateco.com.
— Brenda Kahn