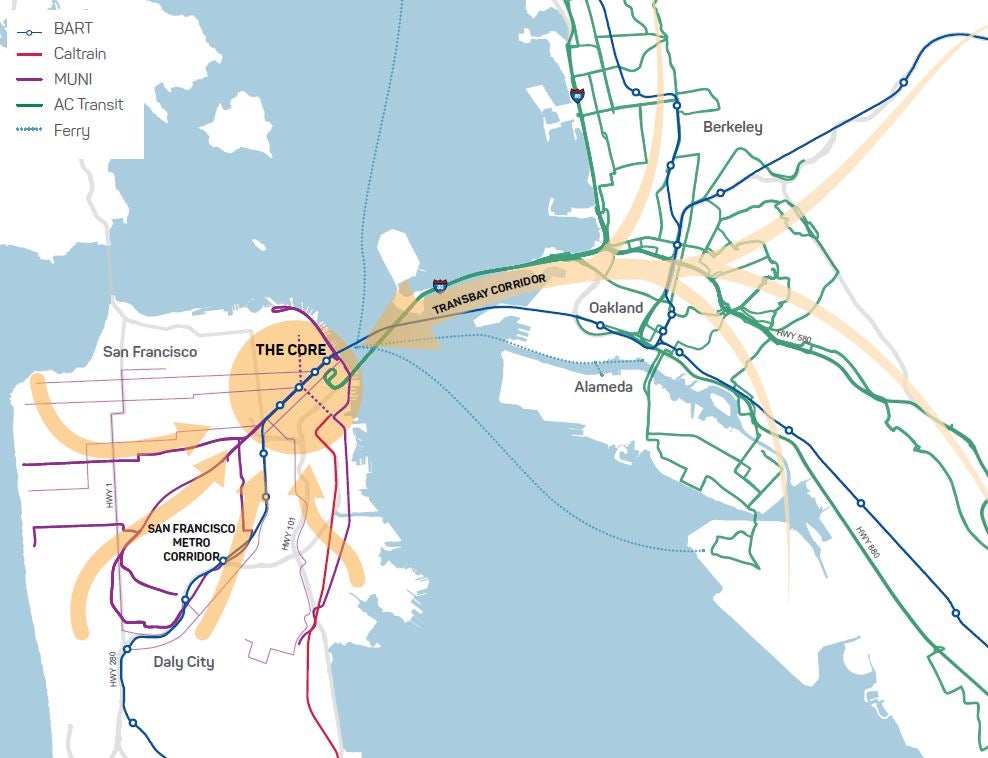 A new report by MTC along with six Bay Area public transit agencies finds that transit serving San Francisco’s primary employment centers experienced growth exceeding even the most aggressive forecasts over the last 10 years, and that ridership is expected to continue growing in the future. The region’s transportation infrastructure is already past physical capacity during peak travel periods and will be unable to accommodate anticipated future riders without significant new transportation investments.

The report is part of the Core Capacity Transit Study (CCTS), a collaborative, multi-agency effort to identify and prioritize investments that will improve public transportation to and from the San Francisco core. It confirms what many riders have experienced first-hand in recent years: The trains are packed, the streets and highways are congested, and the transportation system is stretched to its limits.

Although there are many planned improvements to help alleviate crowding and improve system efficiency — including vehicle replacement and expansion, new technologies and control systems, new facilities and infrastructure, and new transit routes and services — not all of these improvements are fully funded, and physical and structural constraints remain that will make accommodating anticipated future ridership growth difficult without additional transportation investments.

Click here to view this image as a stand-alone PDF. 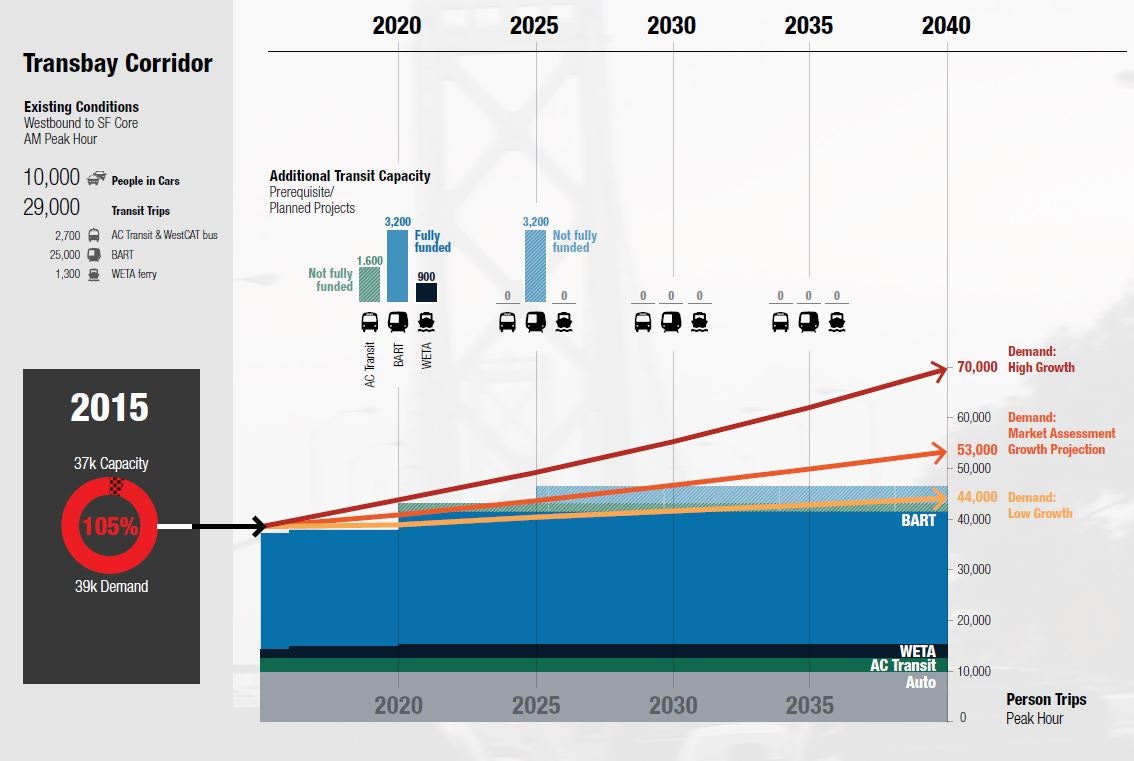 Even planned improvements in the Transbay corridor - many of which have not received funding yet - will not be enough to keep up with future travel demand. Credit: Core Capacity Transit Study: Briefing Book.

For example, BART is hampered by speed restrictions and congestion in the Oakland “Wye” (where all BART lines converge at a point just east of West Oakland Station), and by major systemwide delays when there are issues or maintenance needs in the Transbay Tube. Congestion on Bay Bridge onramps and mixed traffic on the Bay Bridge slow transbay buses, while downtown San Francisco rail stations such as Mongtomery and Embarcadero are already at maximum capacity during peak hours and congestion on Market Street interferes with Muni buses. In fact, two out of every three BART trips begin or end on Market Street in downtown San Francisco.

“This report provides a comprehensive picture of both the challenges to delivering more transit options for people who commute into San Francisco’s employment centers as well as insights into potential opportunities,” said Randy Rentschler, director of Legislation and Public Affairs for MTC.

The graphic below summarizes the full list of constraints currently faced by the Bay Area’s public transit system.

Click here to view this image as a stand-alone PDF. 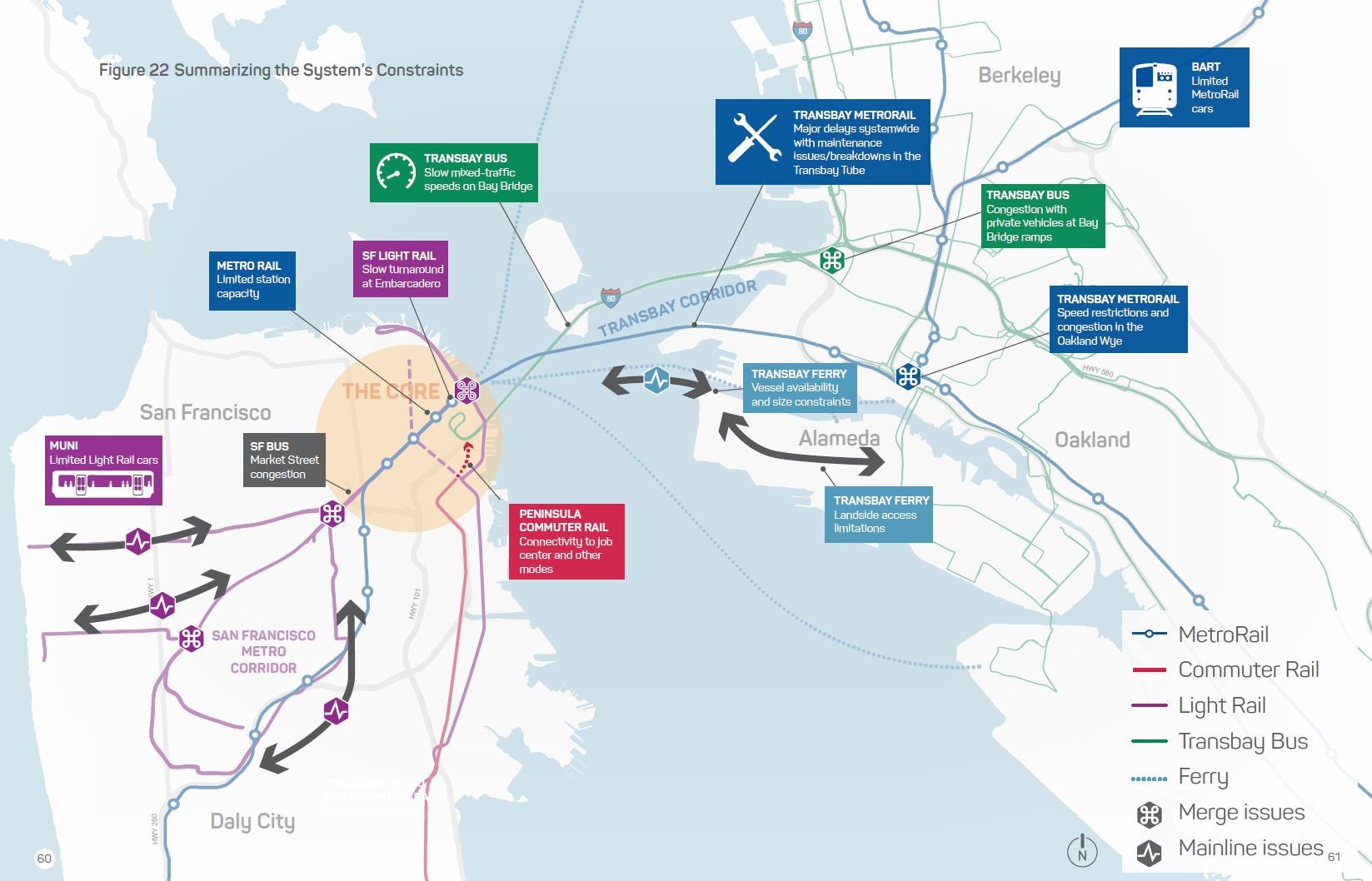 Over the next several months, the study will consider and evaluate additional short-, medium- and long-term investments that could help upgrade the transportation system and keep pace with anticipated growth over the next 25 years. The projects developed and prioritized through the Core Capacity Transit Study will be incorporated into the full list of priorities for the nine-county region in Plan Bay Area 2040, an update to the region’s long-term land use plan.