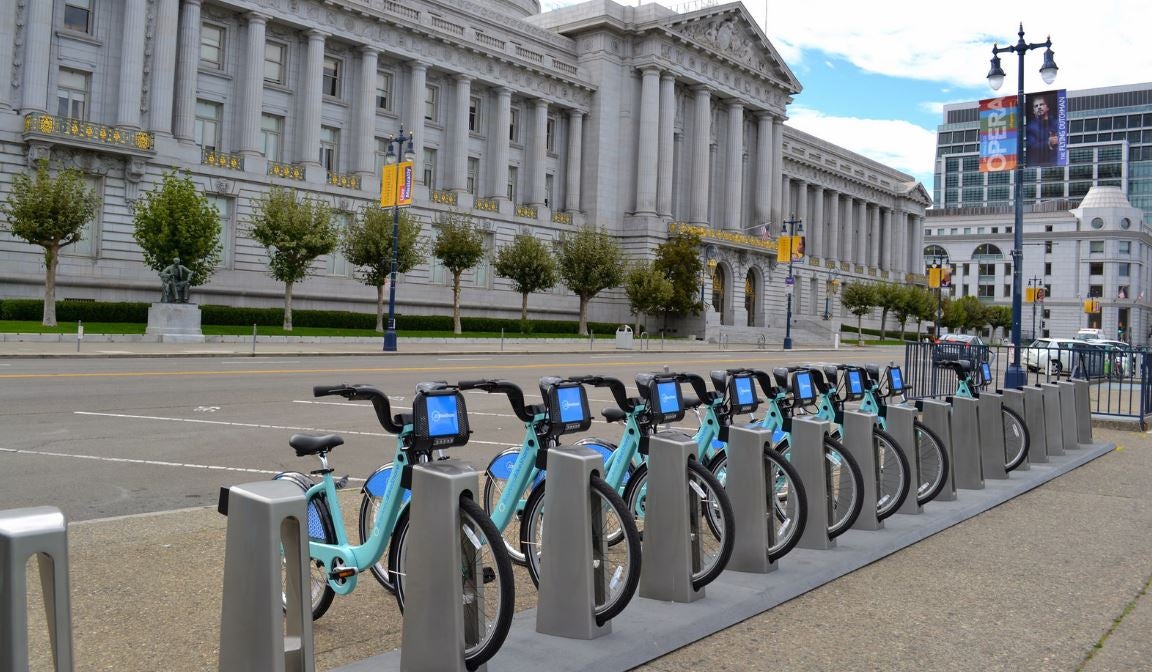 A new map shows the planned locations for 66 additional bike share stations in Berkeley, Oakland and Emeryville as part of an expansion of Bay Area Bike Share into the East Bay. The expansion plans unveiled this week bring the total number of bike share stations planned for the East Bay cities of Berkeley, Oakland and Emeryville to nearly 130, and the total number of bikes to be deployed in the East Bay to 1,500. The plans were unveiled today by leaders from Motivate and the Metropolitan Transportation Commission (MTC), the public-private partnership leading the tenfold expansion of the bike share network throughout the San Francisco Bay Area beginning next spring. As part of the program’s public outreach efforts, Motivate is collecting additional feedback on the proposed locations online.

The 66 proposed bike share stations announced today include locations in the Oakland neighborhoods of Fruitvale, San Antonio and West Oakland; Berkeley’s Southside, North Berkeley and West Berkeley neighborhoods; and Emeryville. The updated map shows proposed “Phase 3” station locations, as well as the locations that were selected earlier this year for Phases 1 and 2 for the bike share network’s expansion in Oakland, Emeryville and Berkeley. Taken together, these locations represent the program’s full East Bay buildout.

When completed by the end of 2018, the East Bay’s bike share system will connect Oakland, Berkeley and Emeryville with a network of nearly 130 bike share stations, offering residents and visitors alike convenient access to 1,500 bicycles. Members who join in the East Bay will also have access to the bike share network in San Francisco and San Jose. Bike share is growing in both of these cities as well, as part of an expansion that will ultimately grow the Bay Area’s bike share service from 700 to 7,000 bikes. Announced in September, the massive expansion is supported by Ford Motor Company. The regional system, currently known as Bay Area Bike Share, will be re-branded as Ford GoBike when the buildout begins next spring.

“Bike share will be an important new transportation option for residents and visitors alike, offering a fun, healthy, affordable and environmentally responsible means of connecting our diverse East Bay neighborhoods,” said Oakland Mayor Libby Schaaf, who also serves as an MTC commissioner. “The planned system reflects countless hours of community input from neighbors and businesses throughout Oakland, Emeryville and Berkeley, as well as our collective commitment to equity. I’m grateful to everyone involved for their hard work and participation, and look forward to seeing bike share hit the ground in the East Bay next year.”

In their initial plans to vastly expand bike share service throughout the San Francisco Bay Area, Motivate and MTC committed in 2015 to placing a minimum of 20 percent of the docks and bikes in “Communities of Concern” — which regional planners identify as census tracts in historically underserved areas with large concentrations of low-income, minority or immigrant households. Motivate’s community-driven planning process has so far significantly exceeded initial targets, and nearly half of the planned East Bay stations will be sited in Communities of Concern.

In an earlier announcement, MTC and Motivate announced plans for reduced membership fees for low-income users of the bike share network.

“We’re very excited to expand bike share access to the East Bay for the first time, and the planned system map we released today reflects our commitment to serving as many East Bay residents as possible,” said Emily Stapleton, Bay Area Bike Share’s general manager. “We’re proud to have far surpassed our goals in terms of providing service to diverse communities across the East Bay and that membership will be accessible to low-income residents at just $5 for the first year.”

“Currently, with just 700 bikes in the system, we’ve seen over one million trips taken in San Jose and San Francisco over the last three years,” said MTC Chair Dave Cortese, who also serves as president of the Santa Clara County Board of Supervisors. “We’re expecting those numbers to explode once the system expands into the East Bay, and we have 7,000 bikes across the region.”

Bay Area Bike Share is a quick, convenient and affordable way to travel around the Bay Area. Bike share allows anyone to rent a bike from publicly available stations and take a point-to-point trip anywhere in the network. Users can purchase a membership for the day or the year, which includes unlimited trips of up to 30 minutes for the duration of the membership.

The expanded system will be sponsored by Ford and renamed Ford GoBike, growing from 700 to 7,000 bikes by the end of 2018, and expanding into the East Bay for the first time. Bay Area Bike Share is operated by Motivate, a global leader in bike share. Motivate manages all of the largest bike share systems in the United States and many of the largest systems in the world, including Citi Bike (New York and Jersey City), Divvy (Chicago), CoGo Bike Share (Columbus, OH), Capital Bike Share (Washington, D.C.; Arlington and Alexandria, VA; and Montgomery County, MD), Hubway (Boston, Somerville, Cambridge and Brookline, MA), Pronto (Seattle), BIKETOWN (Portland, OR), Bike Chattanooga (TN), Bike Share Toronto, and Melbourne Bike Share in Australia. Learn more about Bay Area Bike Share at http://bayareabikeshare.com/.

About the Metropolitan Transportation Commission (MTC)

MTC is the transportation planning, financing and coordinating agency for the nine-county San Francisco Bay Area. For more information, go to mtc.ca.gov.