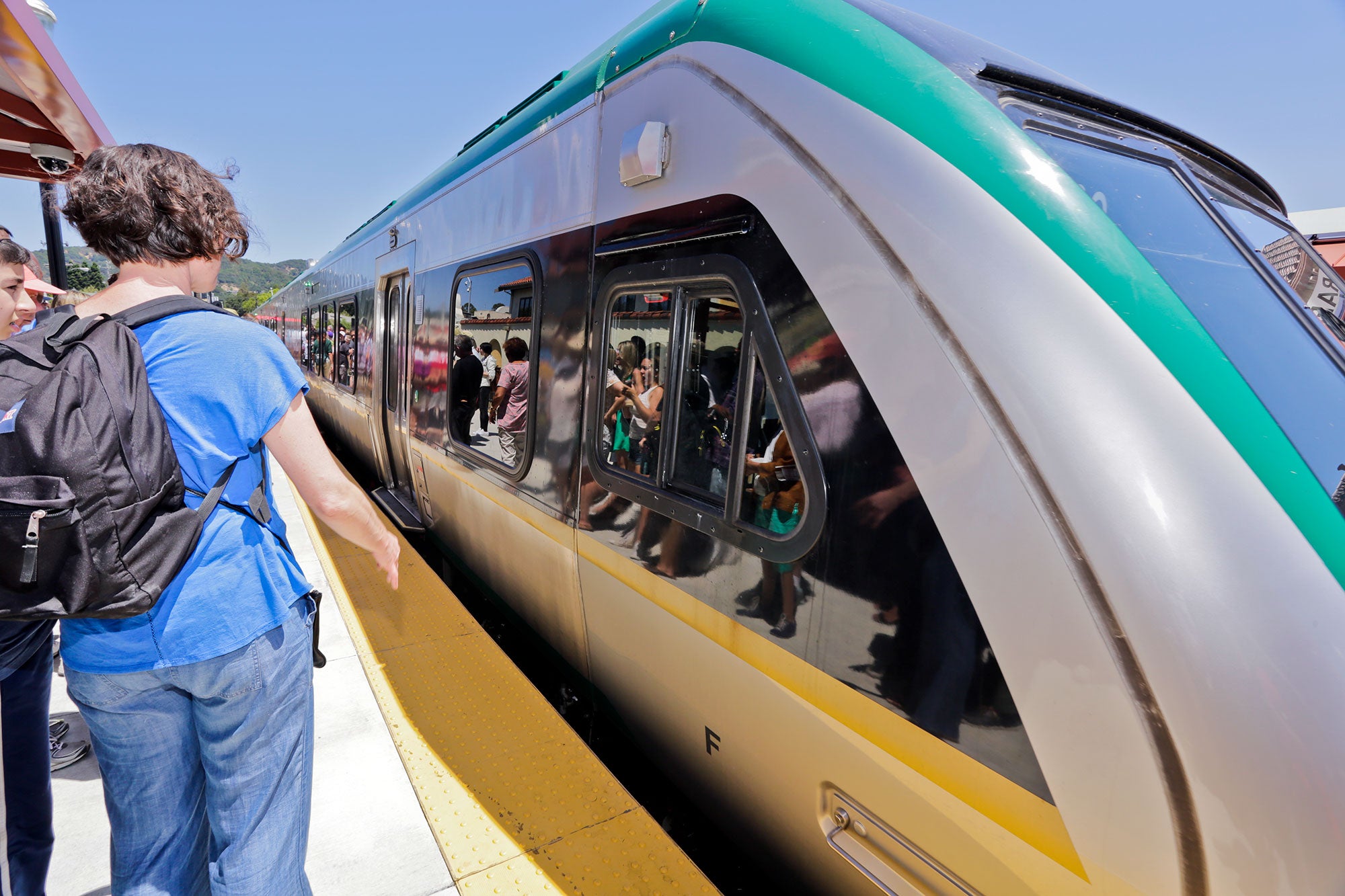 Kingmond Young
After several weeks of test rides, the SMART system is opening for regular service.
Monday, August 21, 2017
Adapted from a SMART release.
The Sonoma-Marin Area Rail Transit (SMART) District will begin full passenger train service this Friday, August 25, 2017, thanks to the Federal Railroad Administration's decision last week to give the system a green light.

“We are proud to say that we are ready to roll,” said SMART Board of Directors Chairwoman Debora Fudge. “This is the result of years of hard work from SMART’s staff, its team of contractors and consultants, and Federal Railroad Administration Regional Administrator James Jordan and his team. Successfully opening a new transit system is a major accomplishment — and we will remember this day for generations to come.”
SMART train service will be free of charge on opening day. In celebration of the start of service, SMART will host a community grand opening event starting at 9 a.m. at its Santa Rosa Downtown Station, at 7 Fourth Street at Historic Railroad Square, and will begin running the full service schedule at 12:49 p.m.
After opening day, SMART fares for everyone will be 50 percent off the regular price through Labor Day, September 4. Regular fares will be in place on September 5. Under SMART’s fare structure, commuters can purchase 31-day passes at significant discounts. Seniors, youth and passengers with disabilities also receive 50 percent off fares. Riders will be able to pay their fares with Clipper®, the universal fare payment system run by MTC. As part of Friday's festivities, outreach workers will hand out Clipper cards.
SMART will run 34 trips each weekday, and 10 trips on weekends.
“This is truly historic. We want to thank the public for their support, and for providing the North Bay with a state-of-the-art transportation system. This system will bring relief to commuters stuck on Highway 101 and provide a stress-free way to travel. It will also provide a major economic boost for both Marin and Sonoma counties,” said SMART Board Vice Chairwoman Kathrin Sears.
In connection with SMART’s start of service, several public transit agencies have developed new routes or adjusted existing ones to coordinate with the train’s schedule. SMART passengers will receive transfer credits to make their connections when using Golden Gate Transit, Marin Transit, Petaluma Transit, Santa Rosa CityBus or Sonoma County Transit — all of which also accept Clipper® as fare payment, for a seamless riding experience. With the addition of SMART, there are now 23 public transit system in the nine-county Bay Area that accept Clipper.
The diesel train system will run 43 miles from the Sonoma County Airport to San Downtown Rafael, with in between stops in Santa Rosa, Rohnert Park, Cotati, Petaluma, Novato and the Marin Civic Center.
MTC has directed $96 million to the SMART system, with the bulk of MTC's contribution coming from bridge tolls. The initial SMART system cost, including the seven inaugural two-car train sets, is coming in at roughly $500 million. An extension expected to be completed in 2018 will take the line to the ferry terminal at Larkspur, for an easy ride across the Bay to San Francisco. With future extensions planned further north to Windsor, Healdsburg and Cloverdale, the line will eventually run for 70 miles. The system is bike-friendly, with space for up to 24 bikes on each of the two-car diesel-powered SMART trains.
Related:
Clipper (Program : California)., Public Transit, Rail Transit, SMART, SMART train
Comments Submit your comment

Riders Get a Taste of SMART