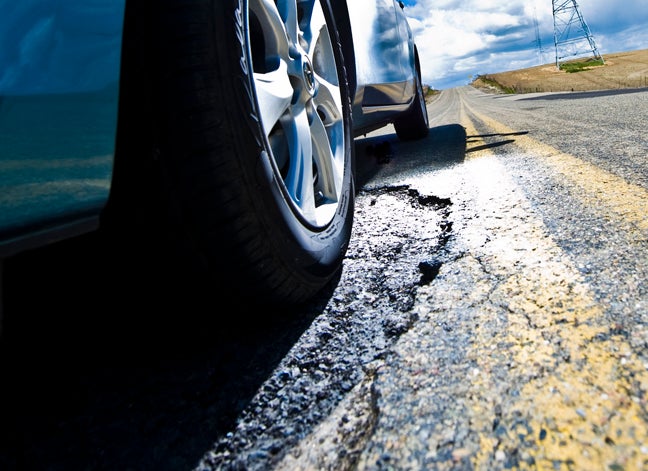 Newly-released 2015 pavement scores for Solano County indicate roads are in need of improvement.

Pavement conditions on the typical road in Solano County are much like those in the rest of the Bay Area: seriously worn and in need of rehabilitation within the next few years. Data released today by the Metropolitan Transportation Commission (MTC) show the county’s 3,500 lane-miles of city streets and county roads registered an average pavement condition index (PCI) score of 65 out of a maximum possible 100 points last year, as calculated on a three-year moving average basis. This compares to a three-year regional average of 66.

PCI scores of 90 or higher are considered “excellent.” These are newly built or resurfaced streets that show little or no distress. Pavement with a PCI score in the 80 to 89 range is considered “very good,” and shows only slight or moderate distress, requiring primarily preventive maintenance. The “good” category ranges from 70 to 79, while streets with PCI scores in the “fair” (60-69) range are becoming worn to the point where rehabilitation may be needed to prevent rapid deterioration. Because major repairs cost five to 10 times more than routine maintenance, these streets are at an especially critical stage. Roadways with PCI scores of 50 to 59 are deemed “at-risk,” while those with PCI scores of 25 to 49 are considered “poor.” These roads require major rehabilitation or reconstruction. Pavement with a PCI score below 25 is considered “failed.”

“One of MTC’s longstanding goals has been to bring the Bay Area’s local street and road network up to a PCI score of 75 or better,” explained Solano County Supervisor Jim Spering, who has been a member of the Commission since 1987. “We have a lot of work to do all around the Bay Area. If you look a little deeper into the Solano County scores, roads in the unincorporated portions of the county are the only ones to meet the 75-point target, and they account for less than 30 percent of the county’s total lane-miles. Among our seven cities, Fairfield and Vacaville have a ways to go, but their scores are holding steady. In Benicia, Dixon, Rio Vista and Suisun City, pavement quality is trending down.  Then there’s Vallejo, which shows the kind of impact targeted roadway maintenance funding can have.”

“Vallejo is climbing out of a very deep hole,” said Mayor Osby Davis, noting that his city, which historically has had the lowest-rated pavement in Solano County, boosted the one-year PCI score on its 714 lane-miles of city streets by 10 points to 55 last year from 45 in 2014. Vallejo’s three-year average PCI score of 49 marks a two-point jump from the 47 registered for 2012-14.

“Vallejo residents are beginning to see a return on their investment,” said Davis, referring to the one-cent sales tax approved by city voters in 2011 to finance a wide range of municipal priorities, including public safety, pavement repair, streetlight replacement and economic development. “We know a lot more needs to be done.” The mayor then wryly added, “I suspect the only people in Vallejo not happy with better streets are the auto repair shop owners.”

The Contra Costa County city of Brentwood and the Alameda County city of Dublin topped the list of Bay Area pavement rankings for the 2013-15 period, with both cities reporting average PCI scores of 85.  Other cities with three-year PCI scores in the “very good” range include El Cerrito (84), Colma (83), Foster City (82), Clayton (81), Union City (81) and San Ramon (80). The lowest-ranked pavement in the Bay Area was found in the Marin County city of Larkspur, which recorded a PCI score of 39 for 2013-15.

The complete 2015 Bay Area Pavement Conditions Summary — including percentages of local roadways in “excellent” or “very good” and “poor” or “failed” condition, and a listing of average PCI scores for the arterials, collector roadways and residential streets — in all Bay Area counties and cities is available at http://mtc.ca.gov/tools-and-resources/digital-library/pavement-condition-bay-area-jurisdictions-2015.

MTC’s Vital Signs website www.vitalsigns.mtc.ca.gov/street-pavement-condition provides even more detailed information on pavement conditions in each of the Bay Area’s nine counties and 101 cities, including both block-by-block analysis and a record of every municipality’s average PCI score for each year from 2003 through 2015. Those interested in a deeper look at the challenges facing the region’s local street and road network are invited to visit the MTC website at www.mtc.ca.gov/whats-happening/news/street-fight-overview and click on the link for a 2014 multimedia piece entitled “Street Fight: The Ongoing Battle for Better Bay Area Pavement.”

MTC is the transportation planning, financing and coordinating agency for the nine-county San Francisco Bay Area.