In the San Francisco Bay area, TRIP finds that only three of the region’s 20 critically needed transportation projects has a green light, to signify that full funding is available or is anticipated to be available by 2020.

“What makes TRIP’s assessment so valuable, and so timely,” commented Santa Clara County Supervisor and Metropolitan Transportation Commission Chair Dave Cortese,“is that the report looks at the entirety of our transportation puzzle, rather than just one or two pieces of it.”

The San Francisco Bay region’s 20 transportation improvements, as determined by TRIP, which are the most needed to support quality of life and the region’s development goals, and their funding status are listed in the following table.  Information on these and an additional 10 needed projects in the San Francisco Bay area can be found in Appendix C of the report. 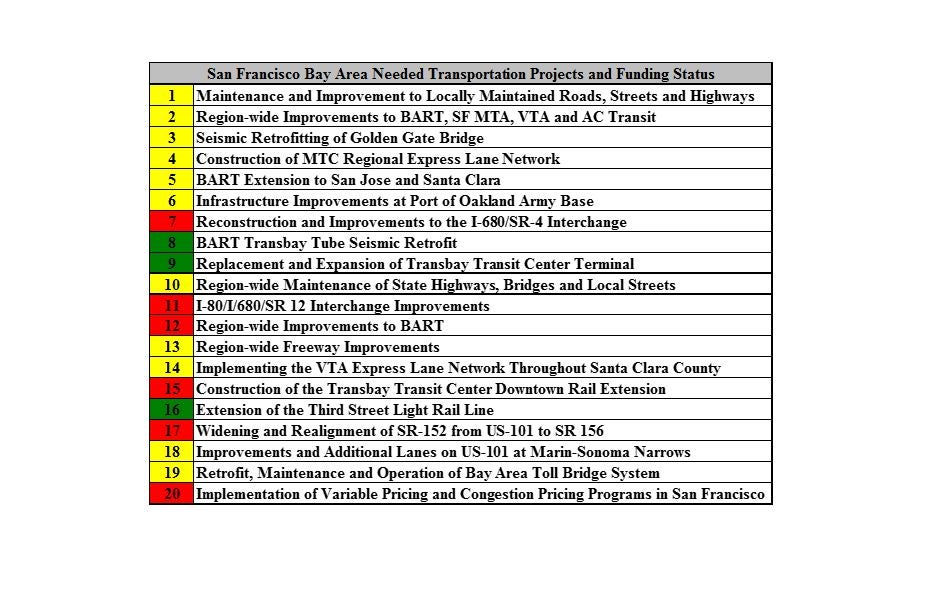 The TRIP report also found that California continues to experience significant growth, with the state’s population increasing by 16 percent since 2000 to 39 million, Gross State Product increasing by 27 percent since 2000, when adjusted for inflation, and statewide vehicle miles of travel increasing by 5.3 percent from 2014 to 2015.  More than half – 51 percent – of major urban roads in California have pavements in poor condition, eight percent of bridges in California are rated structurally deficient and the traffic fatality rate on California’s rural non-interstate roadways is nearly four-and-a-half times higher than on all other roads and highways in the state, the report found.

Turning the red and yellow lights, which many of the region’s most critically needed transportation improvements currently face, to green lights, will require increased transportation investment at the local, state and federal levels.

Signed into law in December 2015, the Fixing America’s Surface Transportation (FAST) Act, provides modest increases in federal highway and transit spending available to states, allows states greater long-term funding certainty and streamlines the federal project approval process.  But the FAST Act does not provide adequate funding to meet the nation’s need for highway and transit improvements and does not include a long-term and sustainable funding source.

“Giving a green light to critically needed transportation projects in the San Francisco Bay area and throughout the state is going to require increased funding from all levels of government,” said Will Wilkins, TRIP’s executive director. “Unfortunately, too many of these transportation projects are facing yellow or red lights and potential state funding cuts could slow their progress even more.”