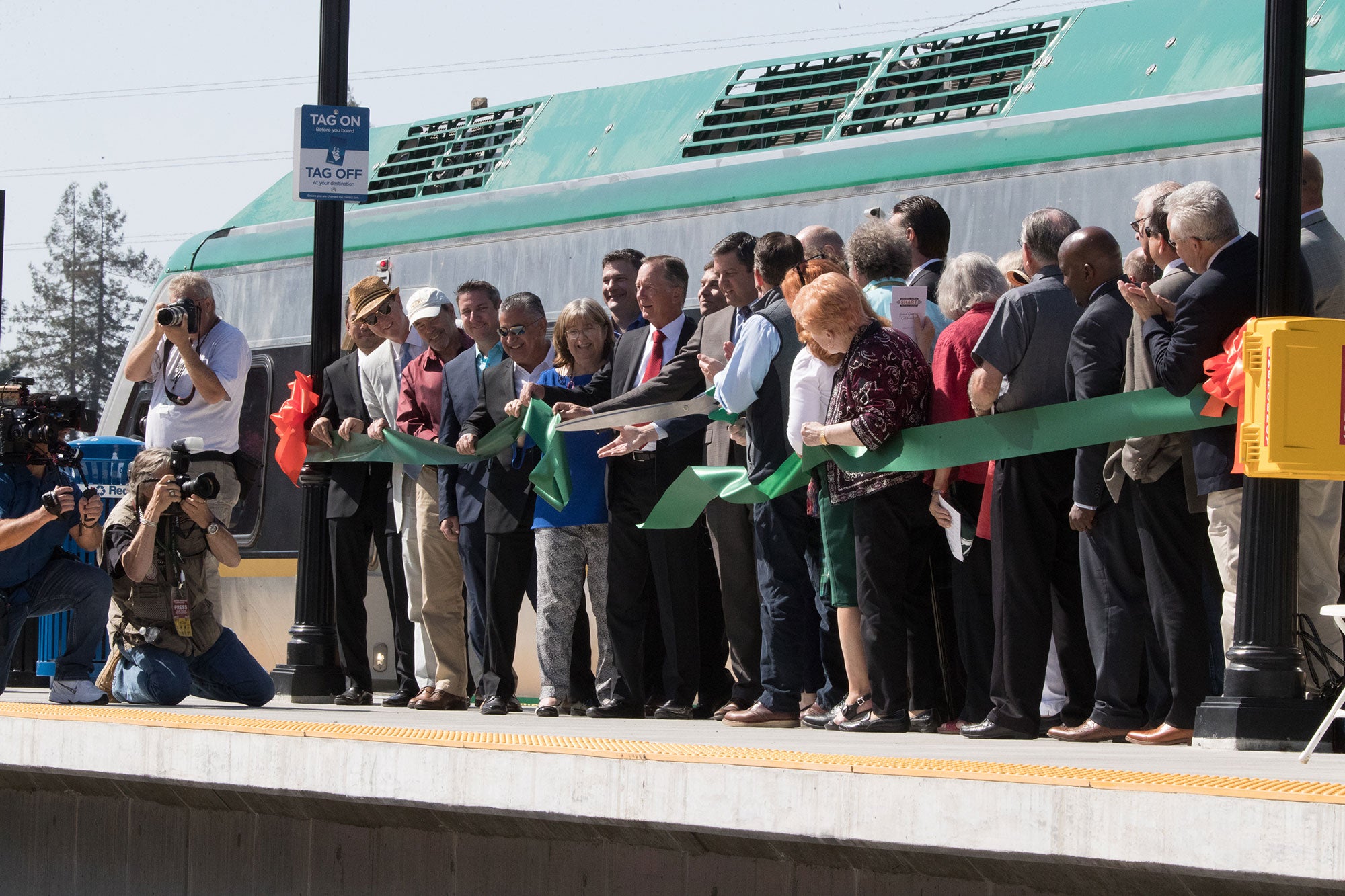 Officials gather on the Downtown Santa Rosa station platform to cut the ribbon and inaugurate the SMART train.
Saturday, August 26, 2017

The atmosphere at the August 25 Grand Opening for the Sonoma-Marin Area Rail Transit line was humming — literally. A three-car train served as the backdrop for the train platform-cum-makeshift stage at the Downtown Santa Rosa station, and the environmentally friendly diesel engines were purring throughout, signaling to the sizable and enthusiastic crowd that the system was raring to roll.

But first it was time to take stock and make note of the contributions and sacrifices of a small army of politicians, advocates and transit professionals who put in countless hours and personal capital to make the 25-plus-year-old vision of a North Bay commuter rail system a reality. A full roster of local, regional, state and federal luminaries —including MTC Chair Jake Mackenzie and MTC Executive Director Steve Heminger — took turns at the podium.

California Secretary of Transportation Brian Kelly thanked Marin and Sonoma counties “for having the courage to dream big.” “You built this from the ground up, a state-of-the-art transit system in just five years” that will serve commuters for generations to come, Kelly said. “We want to see more of this all around California.”

“The day has arrived where two important words will sound out — ‘All Aboard!’ — because the SMART train has finally arrived,” said California Senator Mike McGuire (D-Healdsburg).

California Assemblymember Marc Levine (D-Marin County) pointed to the mobility benefits — “I see the pain and gridlock on 101, and this is going to be a way of easing that pain,” he said — while MTC Chair Jake Mackenzie spoke to the environmental benefits. “There will be transit-oriented development up and down the corridor,” he said.

Santa Rosa Mayor Chris Coursey paid tribute to the “literally thousands of people who have had their hands and hearts in this project.”

The man of the hour was SMART General Manager Farhad Mansourian, who got a standing ovation for his role in overseeing the project over the last six years.

“There’s no question that without him, we would not be here today,” said U.S. Congressman Jared Huffman (D-San Rafel).

Mansourian provided a capsule history of the project, noting that as early as the 1980s, a group of Marin and Sonoma County residents had the vision to save the Northwestern Pacific right-of-way, which was being abandoned. “They had the idea of preserving this right of way for future passenger rail service,” he said. Then came a congressional bill that provided seed funding to purchase the right of way. “That was the beginning of our journey,” he said.

Another breakthrough came in 2008 when Marin and Sonoma counties passed Measure Q with 70 percent of the vote, establishing a quarter-cent sales tax to finance the system. The global financial meltdown put a crimp in the project’s coffers, but Mansourian said they overcame that hurdle by creatively phasing the construction.

Ultimately, it took a combination of federal, state, regional and local funds to buy the right of way, lay the rails, engineer and install a state-of-the-art control system, and build the rail cars. including $96 million from MTC’s coffers.

“We are the little engine that did,” Mansourian said.

A Daruma ceremony, involving an oversized traditional Japanese “wish doll,” capped the speeches. Mansourian explained that two years ago, at the outset of the fabrication of the rolling stock by a Japanese consortium (with assembly stateside), officials filled in one eye on the doll to as a reminder to stay motivated. Now it was time for officials to color in the other eye to signify that “everyone’s dreams have come true,” he said.

The ribbon-cutting followed, after which the officials and eager audience members piled onto the waiting train for the inaugural ride. Just a couple hours later, the system opened for regular service, albeit with free rides on the first day, and discounted rides through the Labor Day weekend.

The hard-working and hard-driving SMART team has their work cut out for them. In addition to running a brand-new rail system, they are starting work in September on a crucial extension south from San Rafael to Larkspur, where riders will be able to catch a ferry to San Francisco starting in 2019.

The politicians aren’t resting on their laurels either, with several vowing at the ceremony to find the funding to realize the full 70-mile vision for SMART, with an extension north to Windsor and Cloverdale.

“The train is going to get to Cloverdale — I just said it,” said Windsor Mayor Debra Fudge, chair of the SMART Board of Directors and MC for the program.

MTC Videographer Mark Jones captured the sights and sounds of the opening ceremony.

Related:
Commuter Rail, Marin County (Calif.), Rail Transit, Regional Rail, SMART, SMART train, Sonoma County (Calif.)
Comments Submit your comment
Ethan Hallings October 30, 2017
as much as I like the train. I wish it was better connected. I wish the bus companies that run into SMART better advertise their buses. I’ve tried using 511.org, and it’s rather confusing. Then again if MTC really wanted to they could require every bus company to better advertise connecting routes.