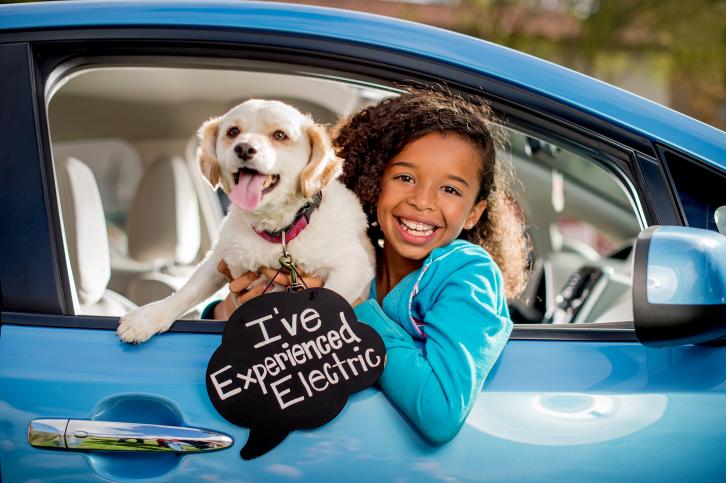 "Feel the power!" That slogan captured the concept behind MTC’s innovative Experience Electric campaign, which was recently honored in two separate award programs.

The California Transportation Foundation named the Experience Electric campaign its 2015 “Public Outreach Program of the Year,” recognizing MTC and the Bay Area Air Quality Management District, which led development of the strategy, along with other partners. Meanwhile, the Bay Area affiliate of Breathe California honored both agencies and the project with the “Public Awareness” award as part of the 2015 Clean Air Awards.

Experience Electric provided the Bay Area public the opportunity to test drive a variety of electric vehicles (EVs) in an environment free from sales pressure, with experts present to answer driver questions. The project hosted 21 ride-and-drive events across eight Bay Area counties over several months in 2014, where more than 4,200 people had the opportunity to drive or ride a variety of makes and models. MTC funded the effort out of its Climate Initiatives Program.

The first effort of its kind in the nation, the campaign aimed to expose Bay Area residents to the joys and cost-savings of driving plug-in vehicles (both pure electric and hybrid), coining the hashtag #TheBetterRide and making extensive use of social media and word-of-mouth marketing as well as traditional advertising and media relations to get the word out.

“Accelerating EV use is one of the key regional strategies targeted to reduce emissions from gas-powered vehicles, improve air quality, and achieve local and state targets for curbing greenhouse emissions,” MTC Project Manager Ursula Vogler stated in her application.

The campaign was designed to positively impact participants’ opinions of EVs and likelihood of a purchase or lease while also creating electric vehicle ambassadors who will promote EVs in their subsequent interactions with others who did not attend the events.

A survey showed that 68 percent of the participants were somewhat more likely or much more likely to purchase or lease an EV as a result of their hands-on experience with the vehicles. In the several months subsequent to their ride-and-drive experiences, the vast majority of participants had spoken with family or associates about electric vehicles (85 percent) and looked online for information about electric vehicles (74 percent). And 8 percent of all ride-and-drive participants ultimately purchased or leased an EV in the two-to-three-month period after attending an event and stated that the event positively impacted their decision. Plans are in the works to replicate this program based on the success of the pilot

Partners in the Experience Electric campaign include the Center for Sustainable Energy, the Bay Area EV Strategic Council, Plug In America, Charge Across Town, the Bay Area Climate Collaborative and the EV Communities Alliance.

Two other MTC-sponsored projects were also recognized in the California Transportation Foundation’s awards program. The Bay Area Incident Management Task Force, which includes MTC and Caltrans along with other partners, won “Safety Project of the Year” for a first-of-its-kind mobile application to streamline the critical exchange of traffic incident information between emergency service responders from Caltrans and other agencies. The app allows responders to snap a simple photo of an incident scene, quickly add key details and instantly send to a pre-defined group through a secure server. The app automatically captures the GPS location and arrival time for each responder and participants receive customized alerts when new information is ready for viewing.

And “Operational Efficiency Program of the Year” went to MTC’s 511 Freeway Assist, which puts the power of a roadside callbox in motorists’ cell phones. By dialing 511 and saying “freeway assist,” motorists stranded by a nonemergency situation such as a flat tire can access help while safely inside his or her vehicle.
— Brenda Kahn