Bay Area Bike Share operator Motivate — which manages the program under a contract with the Metropolitan Transportation Commission (MTC) — today announced a seven-year partnership agreement with Ford Motor Company that will allow Brooklyn, N.Y.-based Motivate to complete its plan for a tenfold expansion of the region’s bike share network to 7,000 bicycles from the current 700, at no cost to taxpayers for bikes, station equipment or operating staff. Under the terms of the agreement, Bay Area Bike Share will be rebranded as Ford GoBike.

Shifting the Bay Area’s bike share system from a limited pilot program to a robust regional transportation option will add scores of new station locations in San Francisco and San Jose, and bring bike sharing for the first time to the East Bay with locations in Oakland, Berkeley and Emeryville. Motivate has identified over 120 station locations to date, and is continuing a robust planning process that so far has included 19 public workshops and more than 100 meetings with local elected officials, and neighborhood and business groups.

The first new bike stations are slated for installation by spring 2017, with the expansion continuing through 2017 and 2018. Public costs for the bike share expansion are limited to permitting review by local cities; targeted outreach to low-income and minority residents; and the distribution of membership passes. Twenty percent of the new stations will be placed in lower-income neighborhoods designated by MTC as Communities of Concern, and discounted membership passes will be made available to customers enrolled in Bay Area utility lifeline programs.

“I have been impressed by the way Ford embraced the mobility options, the environmental goals and the equity concerns that MTC and Motivate put front and center when we authorized the Bike Share program expansion last spring,” said MTC Chair and Santa Clara County Board of Supervisors President Dave Cortese. “The first car Henry Ford built was known as the Quadricycle, and the company has established itself as an industry leader in electric vehicles and green manufacturing. So I like to see the decision to support the growth of our bike sharing program as a logical next step for Ford.”

Plans for the bike sharing program’s East Bay debut include a total of 850 bikes in Oakland, 400 in Berkeley and 100 in Emeryville. “Oakland is at the center of the BART and AC Transit systems, and bike sharing can effectively extend the reach of those services,” said Oakland Mayor and MTC Commissioner Libby Schaaf. “I, too, am very proud of the commitment to social equity that we’ve placed at the core of this partnership; and we’re taking steps to ensure that bike sharing both reflects and truly serves our communities. Right now, station locations are being chosen through an ongoing series of open forums and outreach events with local residents and businesses.”

Ford’s sponsorship support will allow Motivate to boost the number of shared bikes in San Francisco to 4,500 from the current 328, and the number in San Jose to 1,000 from 129. “When the bike sharing program first launched three years ago, we saw a transformation in the way residents and visitors alike moved around our city,” noted San Francisco Mayor Ed Lee. “This is another step in providing a smarter, more connected, more flexible transportation network in our region.”

Echoing Lee’s comments, San Jose Mayor and MTC Commissioner Sam Liccardo explained, “San Jose is committed to working regionally to implement smart, sustainable strategies that invest in our urban cores and transit corridors, and promote walking, bicycling and transit ridership. Boosting the size of the bike share fleet in San Jose will bring the benefits of bike sharing to a much greater share of our residents, making the commute greener, healthier and more affordable.”

“A transportation revolution is coming to the Bay Area!” said Motivate CEO Jay H. Walder. “This unique partnership with Ford shows that bike share is no longer ‘alternative’ transportation, it is central to creating smart, on-demand mobility that represents our values for equity and sustainability. Thanks to the vision and leadership from the MTC, and city leaders from across the region, bike share will soon be available for all in the Bay Area.” 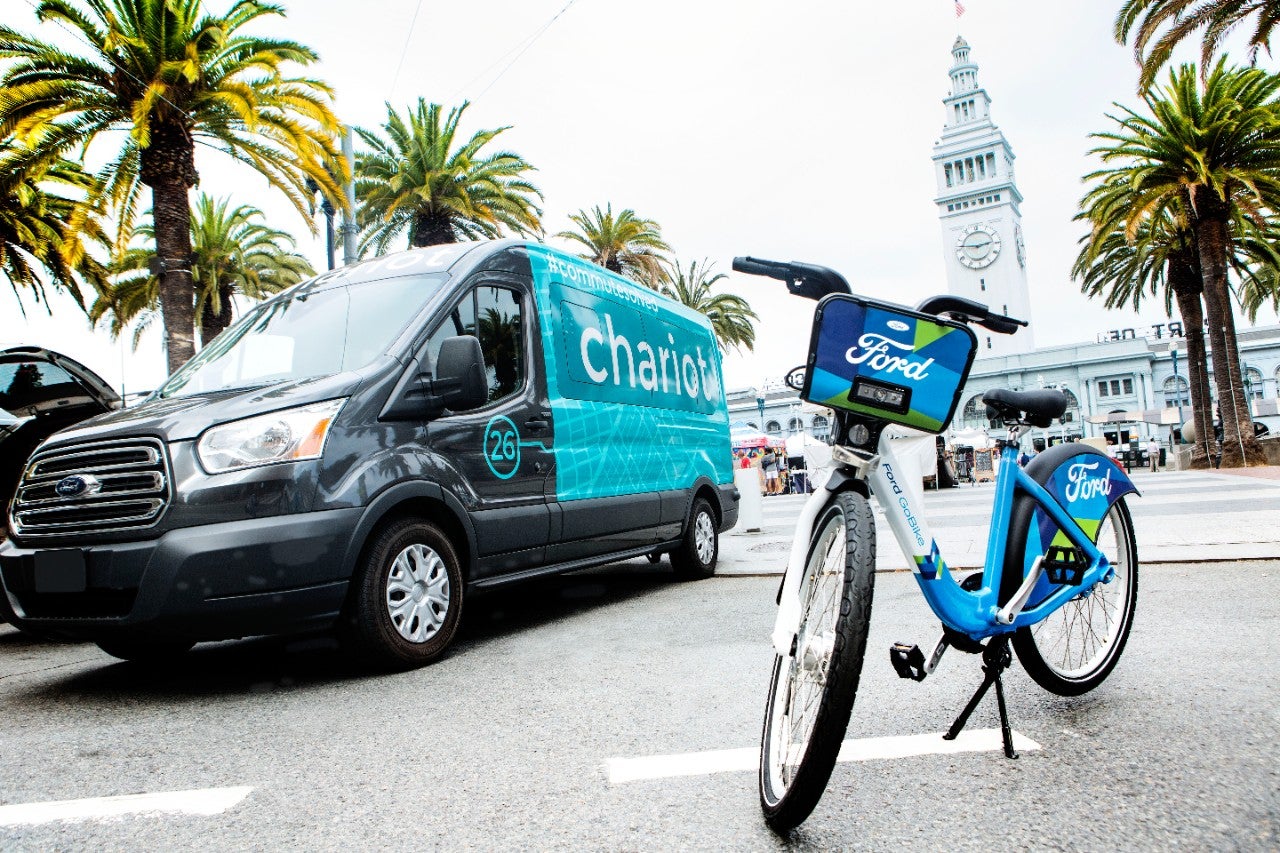 In addition to annoucing its sponsorship of bikesharing in the Bay Area, Ford announced its acquisition of the Chariot shuttle service.

In addition to unveiling its sponsorship of bikesharing in the Bay Area, Ford announced its acquisition of Chariot, a crowd-sourced shuttle service based in San Francisco. Both projects are part of a larger push at Ford to pursue innovatve mobility modes in cities worldwide. Read more.