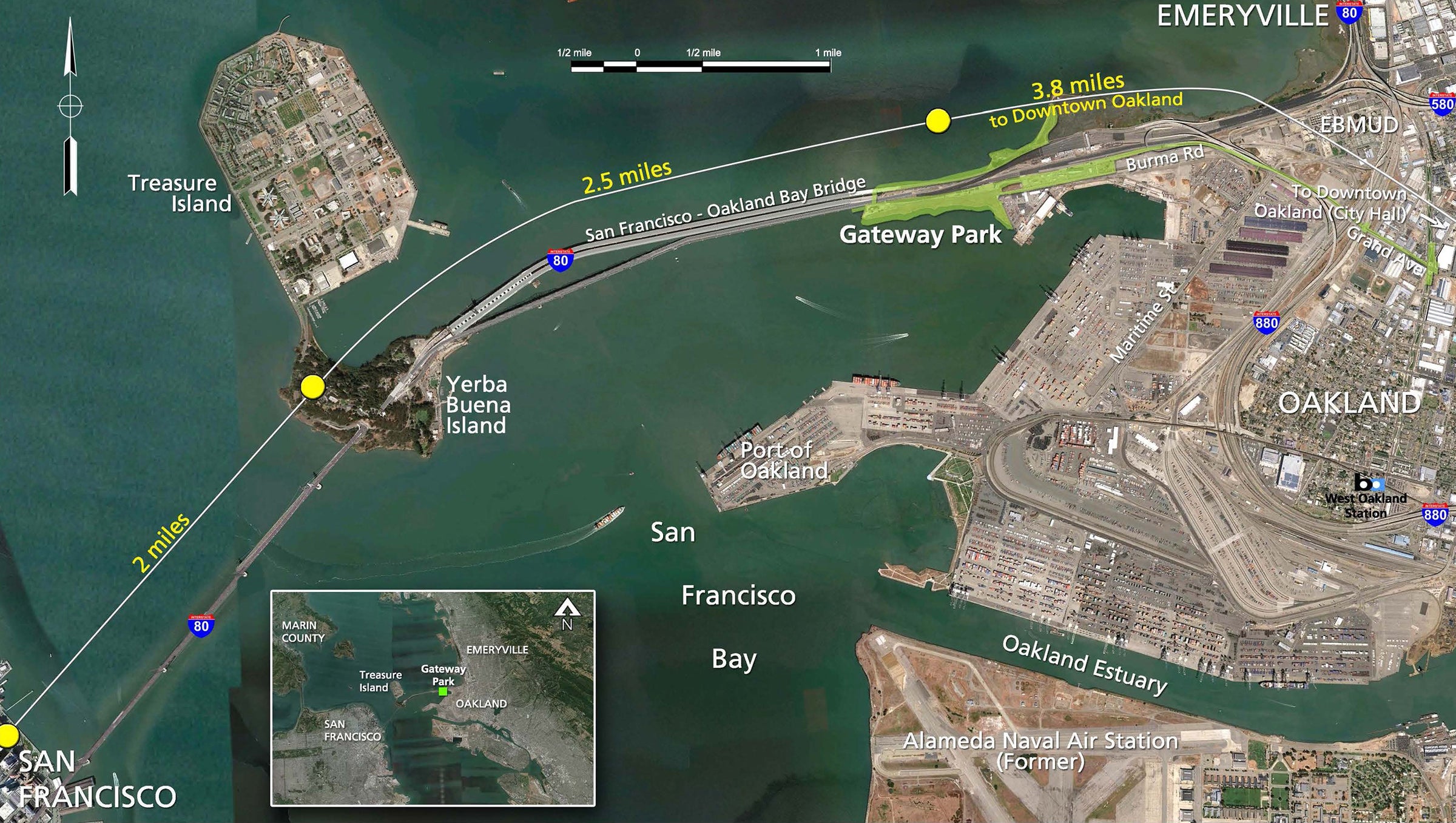 At a public meeting on October 7, the San Francisco Bay Conservation and Development Commission’s (BCDC) Design Review Board (an advisory committee) reviewed a proposed design for Gateway Park, as it is currently known. Andrew B. Fremier, deputy executive director of the Bay Area Toll Authority (BATA), which is a member of the Gateway Park Working Group, introduced the proposal, underscoring, “With the bridge opening…we’re really starting to see the idea take hold.”

Construction of park facilities is currently predicted to begin in 2016. And so an opportunity identified more than 10 years ago is seeing an acceleration in attention. The current review follows the completion of the Gateway ParkProject Concept Report (PDF) in September, 2012, produced in a collaboration primarily between design and architecture firms Perkins + Will and EINWILLERKUEHL. The report followedtwo prior public workshops that took place in 2010.

During the presentation to the BCDC design advisory committee, Sarah Kuehl of EINWILLERKUEHL, Francis Lo of T.Y. Lin International and Andrew Wolfram of Perkins + Will, touched on a wide range of interesting design possibilities, including a large variety of repurposing projects. Existing structures at the far west point of the park and surrounding the foot of the new span could be rehabilitated to serve as a gallery space, artists’ studios, a ranger station and a Warming Hut like the one near San Francisco’s Crissy Field, which is in view of a different bridge.

Not only does the new span make its influence felt; so does the old. A section of the original structure immediately west of the tip of the shore could potentially be preserved as a combination park, boardwalk and viewing platform. "This very final segment could become an amazing belvedere from which to view the new bridge, to view the Bay. It would be kind of a little version of the High Line,” said Wolfram, referencing the popular linear park built on an old elevated train track in New York City’s Chelsea neighborhood. “We would take the top deck off, so that you are open to the sky on the lower deck. It gives you this great vista of the Bay Bridge.”

Farther east, there is the possibility of a physically inverted preservation, which would utilize the roof-like upper section of the old span as opposed to the lower deck. The raised arch pieces of a stretch of the structure could be repurposed as a sort of industrial, readymade sculpture along the main entry path to the park for cars. “We’ve looked at saving some of the pieces of the old bay bridge to be a sort of series of gateways,” Kuehl said. Nearby, an underused building formerly occupied by the Key System, the mass transit company that ran a commuter rail track from the East Bay to San Francisco until 1958, will be rehabilitated into a public facility, with a transportation museum being one potential use.

The proposed design ensures that the new park will incorporate and coexist with existing infrastructural and industrial elements. Kuehl described the intended effect as a sense of “being small” amidst the industrial scale and character of the park and its environs. To that end, several giant shipping cranes may be preserved at the end of a stretch of boardwalk facing southwest, that itself allows panoramic views of the Port of Oakland and many similar cranes that seem to walk along the horizon.

The plan also ensures that the park will interface as seamlessly as possible with the surrounding area. This includes West Oakland, which will be connected to the park via a flyover bicycle path that also serves to connect bicyclists to the new East Span and its pedestrian/bicycle pathway. (A small cheer went up in the audience when Fremier mentioned the future possibility of a bicycle-accessible West Span, which would complete the route from Oakland to San Francisco.) Another bicycle path would run down from Emeryville and converge with the flyover route from Oakland to create one path running through the park and connecting with the new span. “The spine of the park really is driven by getting bicycles to and from the Bay Bridge,” Kuehl said.

The linear nature of the park is reflected in that word, “spine.” The strip of land dedicated to the future park is only around 2,000 feet wide at its widest point, created by the northern point of Radio Beach. The park narrows in the direction of San Francisco, and its western half is uniformly a mere 700-800 feet wide. The approach to the Bay Bridge bisects the strip lengthwise, further accentuating its linearity. Design plans reflect this unusual layout by emphasizing movement not only to and from the bridge, but also within the park itself.

Bicyclists were termed “first-tier users” by Kuehl, and Dave Campbell of the East Bay Bicycle Coalition could not be happier with the designation. Referring to his long working relationship with some of the officials from the nine agencies involved in the Gateway Park Working Group, he said, “They’re my buddies.” Regarding the park, he added, “This is an awesome project. It kicks butt.”

The degree of collaboration between the public and agents of officialdom was evident at the meeting from the start, in the number and character of personal greetings being made. During the audience presentations, Campbell spoke for many, undoubtedly, when he said, “Bicyclists do not like billboards”; it was a companionable nod to the four members of an anti-billboard group called Scenic East Bay who, in matching t-shirts, had addressed the room before him.

The design plan is just that — a plan, and the practicalities of implementation need to be considered before ideas can become actual. This includes environmental contingencies as well as funding sources, which are still being determined. A public scoping meeting on November 14, 2013 will begin the environmental review process, which is the next milestone on the road to the park’s completion. “Clearing it environmentally is the first big step, but we do believe we'll be able to build it in incremental pieces…each new piece that gets added will really point to the next opportunity,” Fremier said. The park will eventually be constructed in phases, roughly from the eastern most portions out to the point in the west, and following with Radio Beach, on the north coast of the parcel on the opposite side of the bridge.

As the early notion of a “gateway park” becomes Gateway Park, area residents can anticipate not only an impressive array of park facilities on a currently underutilized, idiosyncratic piece of land, but also an updated welcome to a new Oakland: the one with the new span.