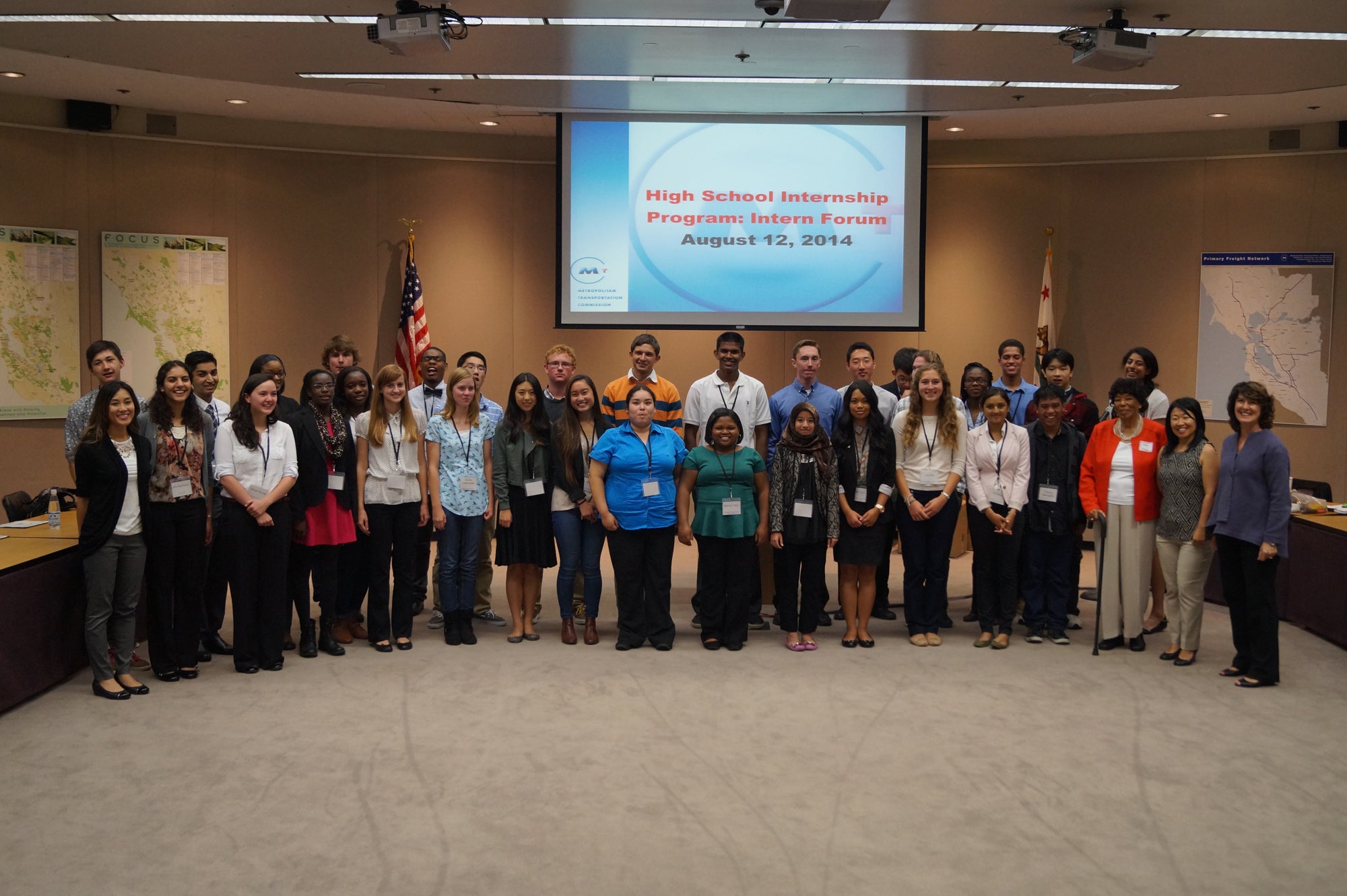 Forty-two interns were placed at 39 agencies throughout the Bay Area.

Armed with PowerPoint presentations, and flexing their budding public speaking skills, MTC’s high school interns competed last week to convey their summer experiences in the most creative and compelling manner.

The teens peppered their presentations with clever jokes and grinning selfies. But the slideshows also demonstrated the remarkable array of skills — from marketing to GIS mapping— that the interns picked up over the summer, and the depth of their exploration into the transportation field.

Each summer, ambitious Bay Area youths descend on the region’s transportation system and get to work. This summer's crop of 42 high school interns were placed at 39 public agencies throughout the region.

Now in its 14th year, the paid program is designed to introduce students — many of whom have never before had professional experience — to the wide range of career options in transportation, from advocacy to engineering. While recounting their experiences, many said their internships have inspired them to pursue new career paths.

“I learned a lot about the public sector,” said Alison Young, who just completed her internship with the city of Mountain View. Working at a public agency requires direct contact with constituents, and employees are constantly asking, “What does the community need?” said Young, an incoming freshman at Brigham Young University.

Young spent her summer working on the conversion of the speed limit in Mountain View’s school zones from 25 miles per hour to 15. She calculated costs and exercised patience while helming the project’s telephone complaint line.

Though some of the placements involved a bit of filing and faxing, all interns played integral roles in the various agencies’ programs. Some may have had more authority than they bargained for.

While working on adding a subscriber feature to the town of Danville website, Adith Kumarasivan “got a little ambitious” and started poking around in the code.

“I refreshed the page, and it crashed the entire site,” remembered Kumarasivan, a rising senior at San Ramon's California High School. “It was a Friday night, so the whole weekend I was thinking, ‘Did I just take down a government website?’” Luckily the site was backed up, and Kumarasivan learned a lesson about the intricacies of technology.

MTC’s summer internship program was created in 2000 to provide career training and a pathway into the transportation world to historically underrepresented groups.

“I was very much interested in MTC's internship for college students, but thought that was a little late in their lives," said Candy Gayle, who was on hand for the presentations and was instrumental in establishing the program when she sat on MTC's Minority Citizens Advisory Committee, which has since been superseded by MTC's Policy Advisory Council. “Many of the high school students don’t even know what transportation is all about. Unless you understand what’s going on, there’s no fascination.”

Except once when she was ill, Gayle has attended every single orientation and showcase. And she says they’re getting better and better each year.

“I’m so delighted with these youngsters,” she said. “They are so smart and sharp and they appreciate the fact that they’re learning so much.”

MTC's Yulee Kim, the manager of the intern program, agreed.

"Since its inception, the program has introduced hundreds of students from a wide variety of backgrounds to transportation," said Kim after the presentations. "The impressive group here today reflects the immense cultural diversity of the Bay Area, and the changing face of the field."

Tuesday’s forum helped to demonstrate all that the interns gained from their summer experiences: professionalism, passion — and cozy MTC sweatshirts that they snagged before leaving.