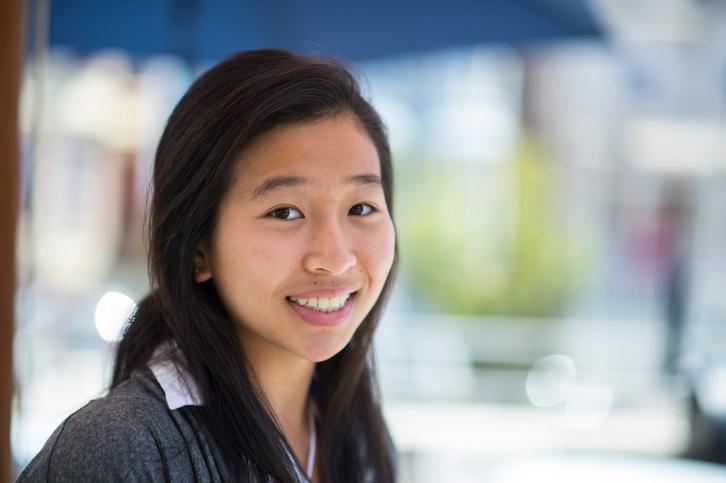 Recent graduate Karen Chow interns for the City of Burlingame.

High school students trekked from as far north as Napa County and as far south as Santa Clara County to attend the orientation for MTC’s High School Summer Internship Program on June 18. Interns smiled nervously as they arrived by car and public transit in their new work attire to meet their supervisors, learn about MTC and participate in team-building activities to prepare for what likely would be their first professional job.

This is the 15th cohort of students to begin their career as MTC interns. Over 400 students applied for the internship program, and the 44 selected were among the most competitive candidates. That’s up from the 35 hired last year, thanks to additional sponsorships from MTC, Solano Transportation Authority, the Napa County Transportation and Planning Agency, and the Spare the Air Youth Fund.

Alix Bockelman, MTC deputy executive director for policy, welcomed the interns and congratulated them for making it this far. She explained that the internship program was started in 2000 by MTC’s Minority Advisory Council. “We wanted to expose minority populations to transportation professions,” she said. Internships are designed to introduce students to the funding, construction and planning sides of transportation.

At the orientation, interns learned how to log in their hours and how to conduct themselves in a professional environment. Afterward, interns participated in ice breakers, working in teams to unscramble words, write a paragraph with those words, and compete against other teams to build the tallest free-standing paper tower.

Throughout the orientation, interns and supervisors mingled during breaks and were encouraged to meet people from different counties.

Joel Duarte, a rising senior at New Tech High in Napa, heard about the internship program when MTC Human Resource Analyst Yulee Kim, who directs the High School Internship Program, made a presentation to his class. Duarte will be working at the Napa County Transportation and Planning Agency, assisting with marketing of the transit system, data collection for local bus routes and some clerical duties. While he is interning to fulfill a high school graduation requirement, Duarte hopes to get a feel for what it is like to be in a work environment. “I want to get into business and marketing, and my internship will expose me to that,” he said.

While this is the first taste of the transportation field for many of the interns, that's not the case for Bertha Arbizo, incoming freshman at Cal State East Bay, who worked on a Safe Routes to School project in high school. This summer Arbizo will be interning at Alameda County Public Works, assisting staff with another aspect of Safe Routes to School — grant applications. “I want to learn more about grant writing. I like using language and literature to convince someone,” she said. While Arbizo is starting out as a major in forensic biology, she is also considering a career in transportation.

Karen Chow, a June graduate of Aragon High School in San Mateo and incoming freshman at UC Berkeley in biological sciences, will be performing data entry in the engineering section for the city of Burlingame. “I want more experience working in the public side, working full time, working on presentation skills and gaining more skills to use in future jobs,” she said.

MTC’s Technology Services Section Director Nick Roethel advised interns “to be compelled to be focused in the next few weeks,” adding, “Some of you are set on what you want to do in the future. Some of you are feeling around for what you want to do.” Roethel recalled wanting to be a fireman before pursuing a career in technology services. After starting training in the fire academy, he realized his fear of heights would prevent him from being successful at that field. At the end of his speech, Roethel wished interns good luck and told them that “this learning experience that you have is incredible.”

The High School Internship program started June 18, and ends August 28, and will culminate with a farewell gathering where the interns will each make a presentation on their summer projects and lessons learned.

MTC's annual internship program wrapped up as the summer drew to a close. More than 400 high school students applied to be in the program. The cream of the crop, about three dozen students, were chosen, and put to work in their home counties with transportation agencies. They earned a modest stipend, they learned, and they had fun.