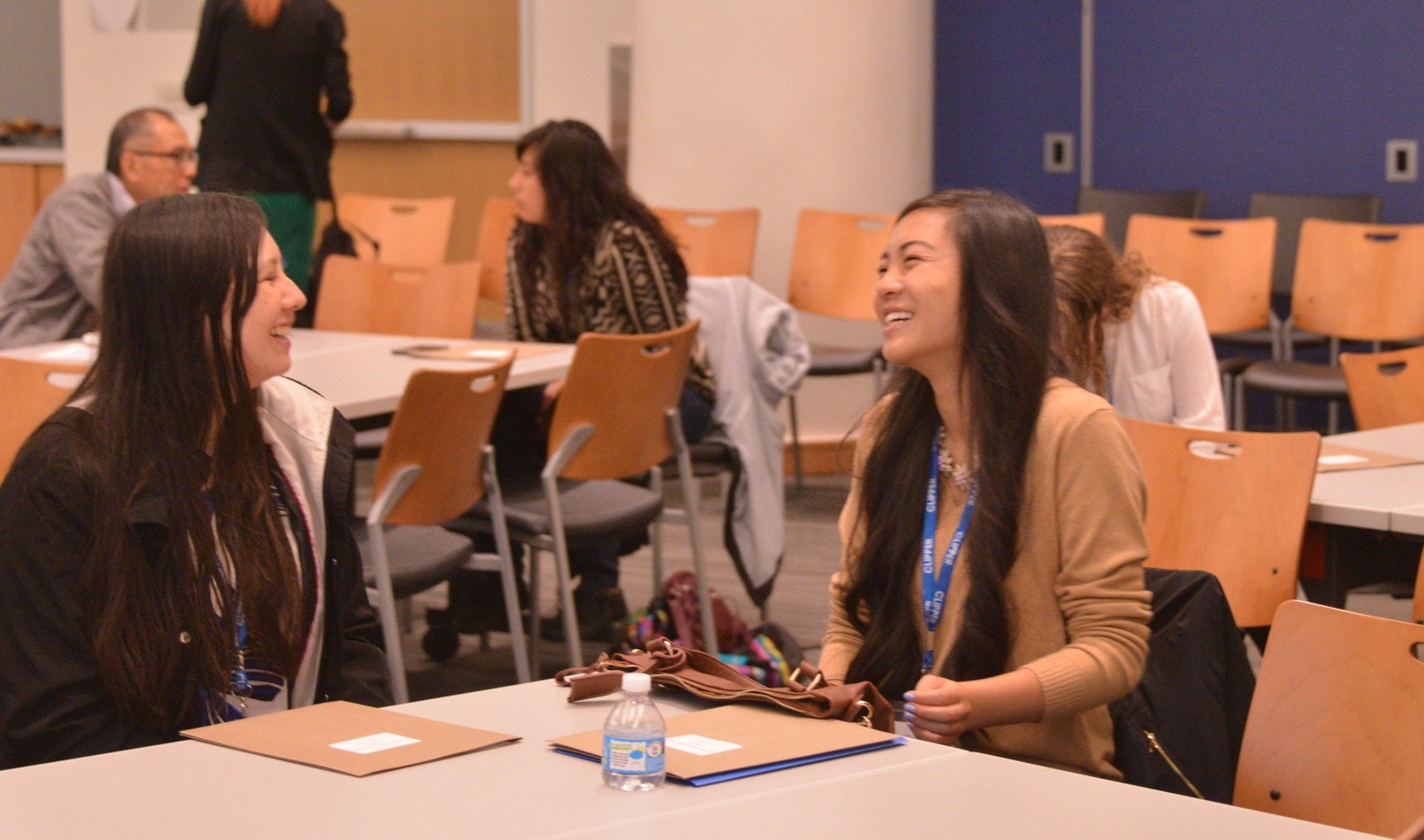 “The internship program is not only about helping students build technical skills, but also about giving them a head start and experience with the job application process,” says MTC’s Human Resources Analyst Yulee Kim, who is also the primary coordinator of the program. “Applicants compete with other students for a position, answer typical job application questions, and go through a formal interview process at a public agency.”

After opening remarks from Kim and MTC Technology Services Director Nick Roethel, the interns heard from two former participants of the program. Vanessa See is now a Civil Engineering student at California Polytechnic State University and is interning at the college level with the San Francisco Municipal Transportation Agency (SFMTA). “It helped me choose my major and form a really valuable network of colleagues,” See said of her MTC internship last summer, “including someone who interviewed me for my current position.”

Morgan Wilson, another alumnus of the internship program from San Leandro, who now attends the UC Davis, stressed the importance of communication with supervisors and joining student associations such as the Institute of Transportation Engineers (in which See and Wilson are both student chapter officers).

To further inspire the interns’ summer work and long-term career paths, Kearey Smith, a senior planner at MTC, showed the students a video of President Obama addressing the urgency of improving our nation’s transportation infrastructure. Smith also presented an overview of MTC and its partner organizations, explaining how they all fit into the larger picture of the students’ summer work and society as a whole.

Other important presentations covered logistical aspects of the students’ jobs such as time sheets and behavioral expectations, as well as money management and banking. The students will each complete 250 paid hours of work and make a final presentation on their experiences at another gathering on August 9th.

During networking games between speakers, the tentativeness and formality of the event fell away as the students got to know each other. Laughter filled the conference room as the students, seated at tables with their job mentors, solved word scramble puzzles and competed to construct the largest freestanding tower out of a single sheet of paper.

While the internship will be the first official job experience for many of the students, several have already been working and volunteering in an array of interesting positions. Quiana Stodder from the Town of Windsor in Sonoma County, currently a crêpe chef, and Owen Mahoney from San Francisco, who umpires for baseball games, are both looking forward to professional office and field work experience in the public sector—a more “adult environment,” as Mahoney put it.

Stodder will be attending UC San Diego this fall and plans to major in Environmental Engineering. She will be working at the Town of Winsdsor this summer and learned about the internship opportunity through her supervisor at the Center for Climate Protection, where she volunteers.

Mentors at MTC partner agencies across the Bay Area have been crucial to the success of the internship program over the past 15 years. Mahoney’s mentor Emily Bequlac will be guiding him through his summer at the Presidio Trust national park in San Francisco. Bequlac is Transportation Operations Specialist at the organization, and she explained that “Owen’s duties will be half in the field, half in the office,” including working on a new shuttle system, a parking program, passenger counting systems, bicycle programs, and more.

Another student passionate about environmental planning issues and the social impact of transportation is Violet Simarkar from Santa Clara County. A recent graduate from Evergreen Valley High in San Jose, she will be a freshman at UC Berkeley in the fall, planning to major in Environmental Economics and then attend law school. While most of her school friends are focused on buying cars, she says she wants to “encourage excitement about public transportation rather than cars” among her peers. She is passionate about speech and debate and hopes that her internship at the Santa Clara Valley Transportation Authority will be a promising start to a successful government career.

Following a networking lunch and a raffle giveaway (five lucky students took home high-tech water bottles, chocolate bars, a Clipper Card, and gift cards, though all received another bag of swag), MTC’s Human Resources Manager Robin James closed the day’s proceedings. “You were really selected as the best of the best,” James told the students, echoing a hearty congratulations to all.