News You Can Use in the Event of a BART Strike 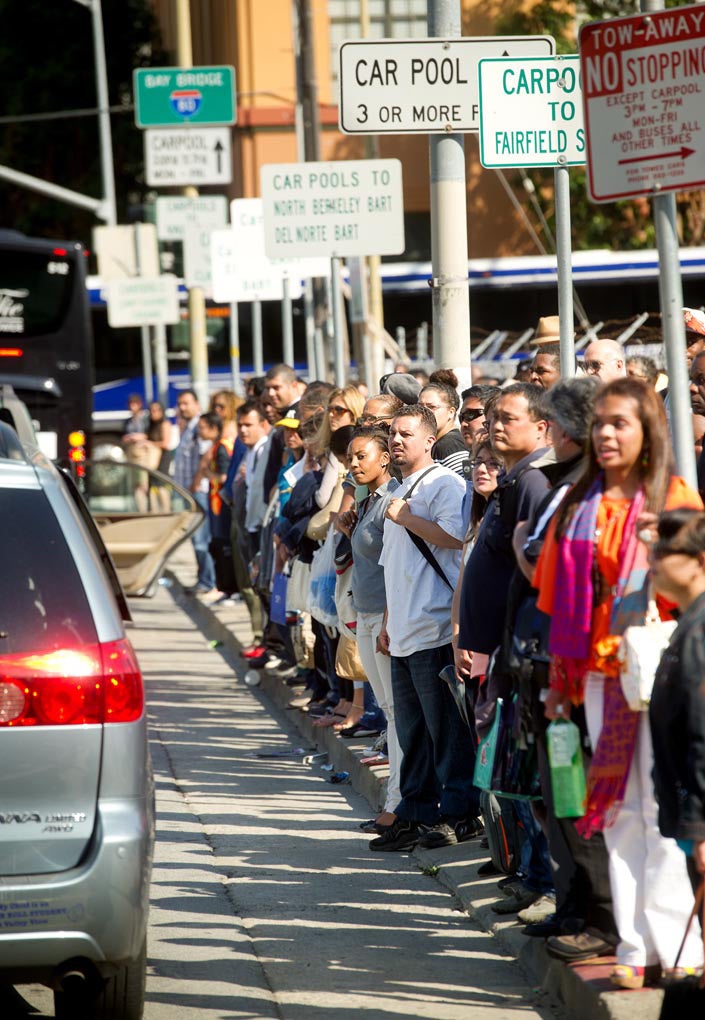 MTC will reward employers and individuals who implement effective commute alternatives in the event of a BART strike.

Monday, August 12, 2013 UPDATE: BART and the unions failed to reach an agreement over the weekend.  Per the Governor's request, the San Francisco Superior Court has declared a 60-day cooling-off period, during which time BART and the unions can continue to negotiate.  BART will have normal train service during this time.

Friday, August 9, 2013 UPDATE:
Negotiations continue between BART management and labor representatives. The Governor's requested period of inquiry ends on Sunday, August 11. BART has not announced any supplemental services for Monday, August 12. BART is operating regular service throughout the weekend. Transit riders and drivers are urged to plan ahead for their commutes, consider alternative transportation, and check alert.511.org for updates.

Monday, August 5, 2013 UPDATE
Late Sunday, Governor Brown stepped in to avert the planned second BART strike that was scheduled to begin on Monday, August 5. The governor appointed a board to investigate the contract dispute between BART and its unions, and essentially imposed a seven-day cooling-off period while the board completes its task. See the governor's letter to BART and the unions.

As regional anxiety ratchets up in advance of a possible second BART strike starting Monday, August 12, MTC and its 511 Traveler Information Service are offering something sweet and something soothing: The three Bay Area employers that implement the most robust commute alternative strategies during a BART shutdown will be rewarded with a choice of a cupcake truck at the worksite or on-site chair massages for employees.

There’s also an incentive for individual drivers to take up the slack: A team of MTC/511 representatives will distribute $5 Peet's Coffee cards to drivers who pick up passengers at the three downtown San Francisco casual carpool locations in the afternoons (while supplies last).

The commute alternatives incentives are part of a Regional BART Service Disruption Contingency Plan developed by MTC, which is also providing up to $20 million to reimburse transit agencies for supplemental services already provided during the July BART strike as well as during the possible August strike; the funds will also cover extra costs for Caltrans and the California Highway Patrol to manage traffic during BART shutdowns.

Employers who want to get on the commute alternatives bandwagon can go to the BART Strike Info microsite, located at alert.511.org; a special Employer Tips page spells out the details of the incentive contest and offers a wealth of ideas for helping their workers cope in the absence of BART rail service.

Possible actions employers can take include allowing or expanding telecommuting; paying for parking for employees who form carpools; relaxing work hour policies so that employees can avoid traveling during peak traffic times; conducting meetings via phone or web; allowing workers to use fleet vehicles to carpool back and forth to the office; and introducing employees toFastTrak® so they can avoid long lines at toll plazas. MTC and 511 suggest that employers designate and train a transportation coordinator who can provide personalized commute advice to workers.

For individual commuters, 511’s BART Strike Info site offers comprehensive information on carpooling. The carpooling section offers three carpool options, including casual carpooling, traditional carpooling with 511 RideMatch anddynamic ridesharing. An interactive 511 mapshows East Bay casual carpool pickup points — just look for the red boxes with the “CC” symbol on the map. Another map shows close-up views of expanded casual carpool pick-up spots in downtown San Francisco area for the return commute to the East Bay. Meanwhile, in the event of a BART strike, carpool lanes along Interstate 80 leading to and from the Bay Bridge would operate all day instead of just during peak periods.

For drivers looking for casual carpoolers in the morning or casual carpool passengers worried about getting stuck in San Francisco in the evening, 511 offers these tips:

For East Bay commuters hoping to form carpools, an interactive map helps locate nearby park & ride lots; BART station lots can also be used free of charge in the event of a strike.

In addition to coordinating commute options, MTC’s strike contingency plans call for extending the hours of operation for the Freeway Service Patrol, a fleet of roving tow trucks that aid stranded freeway drivers free of charge, and is jointly sponsored by MTC, Caltrans and the California Highway Patrol. MTC is also coordinating with Caltrans and CHP to enforce and enhance carpool and bus access through the San Francisco-Oakland Bay Bridge toll plaza, including converting the West Grand on-rampinto an HOV access point.