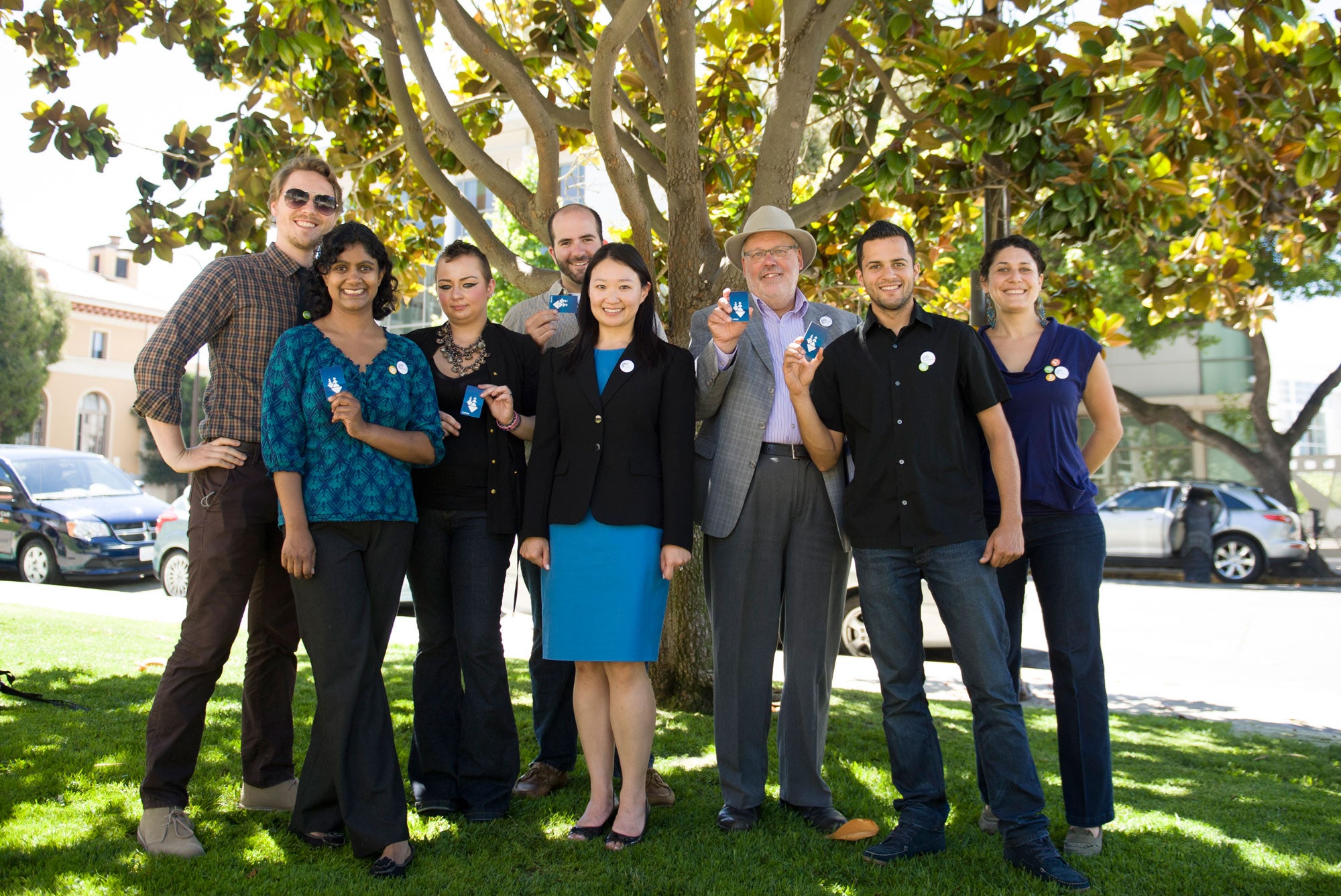 “Go Bears!” is the popular chant in these parts, but it might take a back seat to “Go Berkeley!” thanks to a comprehensive new program that aims to reduce driving and air pollution in the city.

A two-year pilot program, goBerkeley funds three efforts: increased car-sharing through City CarShare, free transit passes for employees of local businesses and dynamic parking management. Representatives from the city, MTC and other transportation agencies, and local businesses gathered in the sun by City Hall June 27 to kick off the initiative, a joint effort funded by the city of Berkeley in partnership with MTC, AC Transit, City CarShare, Transform, the Federal Highway Administration and the Bay Area Air Quality Management District. MTC contributed $2 million through the Climate Initiatives Grant.

“We’ve been anxiously waiting for this day to arrive,” said Berkeley Mayor Tom Bates at the event. “Working together we’re committed to making Berkeley an example of a community that not only cares, but does something about it. We think that by having this goBerkeley program we can reduce greenhouse gas emissions by 1,000 metric tons per year.” Bates, an MTC commissioner, gave up his car in 2009 and now walks or takes public transit everywhere he goes.

The goBerkeley program will concentrate on the Elmwood District, Downtown Berkeley and the Telegraph/Southside neighborhood, all commercial areas with heavy traffic and constrained parking.

Aiming to dissuade local employees from driving to work, AC Transit is in the process of distributing 1,000 free one-year EasyPasses for employees of small businesses in commercial areas. Businesses that expressed interest in participating in the goBerkeley program were awarded the bus passes on a first-come, first-served basis and will receive them by mid-July. Bates handed out EasyPasses, which are loaded onto personalized Clipper® cards, to several representatives from participating businesses at last week’s launch event.

As part of goBerkeley’s goal of reducing demand for parking and cutting air pollution, City CarShare is adding vehicles to its fleet and providing up to $200 in discounts annually to local businesses  in the commercial districts. City CarShare has partnered with the city of Berkeley for over a decade and CEO Rick Hutchinson said he is optimistic that goBerkeley will help the company achieve its ambitious goal of taking 20,000 cars off Bay Area streets by 2020.

In addition to encouraging public transit use and car sharing, goBerkeley aims to implement better parking management in the city. The pilot program will introduce new parking enforcement measures, including the use of license plate recognition technology. The city will likely introduce additional measures to discourage employees from parking on the street all day so spaces will be available for shoppers who currently pollute the air while searching endlessly for parking spots. Under new dynamic pricing systems, parking in some commercial areas will cost more the longer a car is parked and during peak hours. Hourly rates in parking garages may go down to further encourage employees to leave street parking to shoppers.

During the event, Bates confessed that the idea for a multi-faceted transportation initiative like goBerkeley was conceived during a casual conversation in his office over a few glasses of wine. Later he said he always favors a comprehensive approach to climate and transportation projects.

“As a state legislator, I always knew I wanted to have a continuum of services to tie things together,” Bates said. “I brought that belief to transportation. We put together this whole package and it’s really exciting that MTC and BAAQMD stepped up and contributed funding.”
— Natalie Orenstein