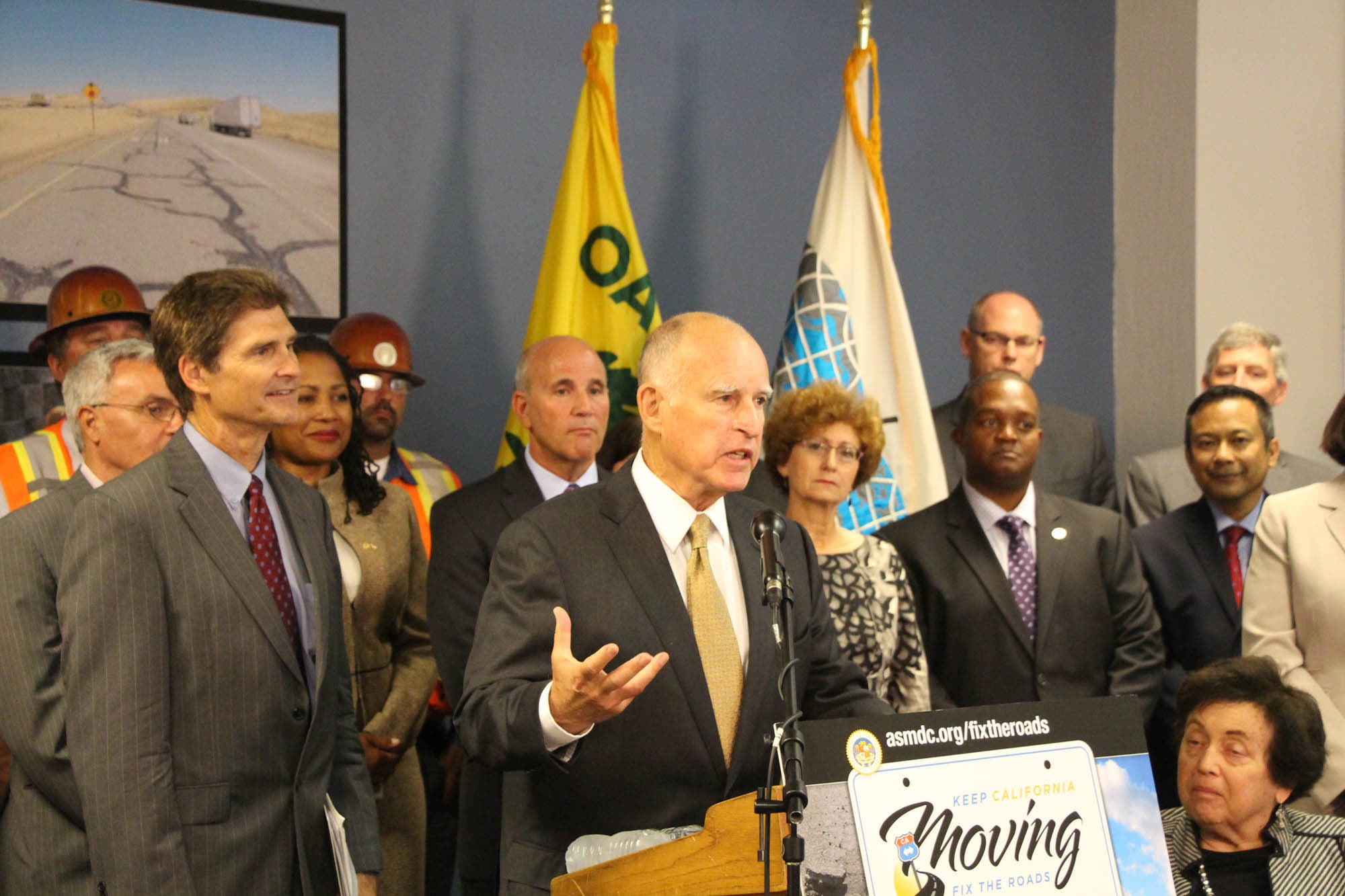 Governor Brown urges bipartisan support to fund road repairs at a news conference at the port of Oakland. (Photo: John Perry/Port of Oakland)

In June, Governor Brown called a special session of the Legislature to address how the state funds transportation infrastructure needs. According to the governor’s office, permanent and sustainable funding is needed to maintain and repair the state’s roads and highways, improve key trade corridors, and support efforts to improve local infrastructure.

According to MTC Senior Legislative Analyst Rebecca Long, this is the first call for a special transportation session in over a decade, and comes from the widespread recognition that the state’s current fuel excise tax is insufficient to meet the state and local governments' severe backlog of needed repairs.

In his proclamation establishing the special session, the governor stated that “the current fuel excise tax revenues are only sufficient to fund $2.3 billion in annual highway repairs, leaving $5.7 billion in unfunded repairs each year” — in part because as cars become more fuel-efficient, gas tax revenues decline. And that’s just at the state level. Backlogs in needed local street and road repairs and the need for new infrastructure to address the region’s and the state’s growing economy add billions more to the tab.

A trifecta of forums on the topic took place on Wednesday, August 19. MTC was one of three dozen agencies that spoke in support of SBX1-1 at the special session’s Senate Committee on Transportation and Infrastructure Development in Sacramento, chaired by the Bay Area’s Jim Beall (D-San Jose), who also introduced the bill. The bill is a financing package that would increase both gas and diesel fuel taxes, increase vehicle registration fees, impose a $100 fee annual fee for zero-emission vehicles that otherwise don’t pay gas taxes, and establish a $35 regisration surcharge on all vehicles.

That same day, a two-part event was unfolding in Oakland and Walnut Creek. Governor Brown, Assembly Speaker Toni Atkins (D-San Diego) along with leaders in business, local government and transportation attended a news conference at the port of Oakland to urge bipartisan cooperation to fund road repairs. Following this press conference, the conversation was moved to a roundtable in Walnut Creek where representatives of regional and local government, as well as the business and organized labor presented their priorities to members of the State Assembly, including Assembly Members Jim Frazier, Catharine Baker, Susan Bonilla, David Chiu, and Adrin Nazarian. MTC Executive Director Steve Heminger presented to the panel about the urgency of state action this year.

MTC Executive Director Steve Heminger testified before the Assembly members at both the Wednesday and Friday events, making the case that funding shortfalls exist in every Bay Area county for transit and pothole repairs. The Bay Area is facing both aging and growing pains, but before the region can accommodate growth, it needs to first fix existing infrastructure. He concluded his presentation by leaving Assembly members to ponder whether the time is right to begin a dialogue in Sacramento about allowing Bay Area voters to raise bridge tolls. — Stella Yip

Interested in joining the conversation around funding transportation? Tune in to the “Keep California Moving: Fix the Roads” website sponsored by the state Assembly Democratic Caucus (asmdc.org/fixtheroads) along with a twitter feed at twitter.com/fixcaroads, or post yourself using the #FixCARoads hashtag.  The campaign also has a Facebook presence at www.facebook.com/FixCARoads, and a website at fixcaroads.com.