Billions for Transportation, Housing and Infrastructure At Stake

Voters across the Bay Area have a chance to take action on two top Bay Area problems at the ballot this November- transportation infrastructure and affordable housing - and to vote down a proposed new hurdle to infrastructure improvements that would undermine local control.

MTC has endorsed 22 local ballot measures sponsored by transit districts, cities and counties, that, if approved by voters, will help fix local streets and roads, provide bike and pedestrian improvements, build affordable housing at a variety of income levels and support efforts to reduce homelessness. MTC also announced its opposition to Proposition 53, a statewide referendum that would amend the California Constitution to require statewide voter approval for certain types of public infrastructure revenue bonds above $2 billion.

Of the 22 local and regional ballot measures, 11 will dedicate revenues solely to transportation or housing needs, including measures in the counties of Contra Costa, Alameda and Santa Clara, the City and County of San Francisco, and the cities of Albany, Berkeley, Martinez and Oakland. The measures include approximately $16.4 billion for transportation efforts to extend and rebuild BART, maintain AC Transit operations, improve Muni and Caltrain operations, repair roads, reduce congestion and provide approximately $3 billion for affordable housing and homelessness.

MTC’s Commission also endorsed an additional 11 local funding measures, including proposals from the town of Fairfax, the county of San Mateo and the cities of Belmont, Berkeley, East Palo Alto, Fairfield, Mill Valley, Pleasant Hill, Suisun City, Vacaville and Vallejo. These measures, totaling approximately $2.4 billion, have greater flexibility in the use of funds, although housing and transportation improvements have been identified by the jurisdictions as priorities.

MTC opposes Proposition 53 because it would require statewide voter approval for any public infrastructure revenue bond above $2 billion issued by a join powers authority created by the state or in which the state is a member, even if that bond was meant to fund a local or regional project. In the Bay Area, for example, this could mean that statewide voter approval would be required if the Bay Area Toll Authority were to issue revenue bonds backed by the region's bridge tolls, or for bonds issued by the Transbay Join Powers Authority.

“The many ballot measures focused on transportation and housing indicate how important these issues are to the quality of life across the Bay Area,” said Randy Rentschler, director of Legislation and Public Affairs for MTC. “Proposition 53, meanwhile, would negatively impact local control and create new and significant hurdles to raising funds for infrastructure improvements across the state."

Click here to view this map of dedicated transportation and housing ballot measures endorsed by MTC as a stand-alone PDF. 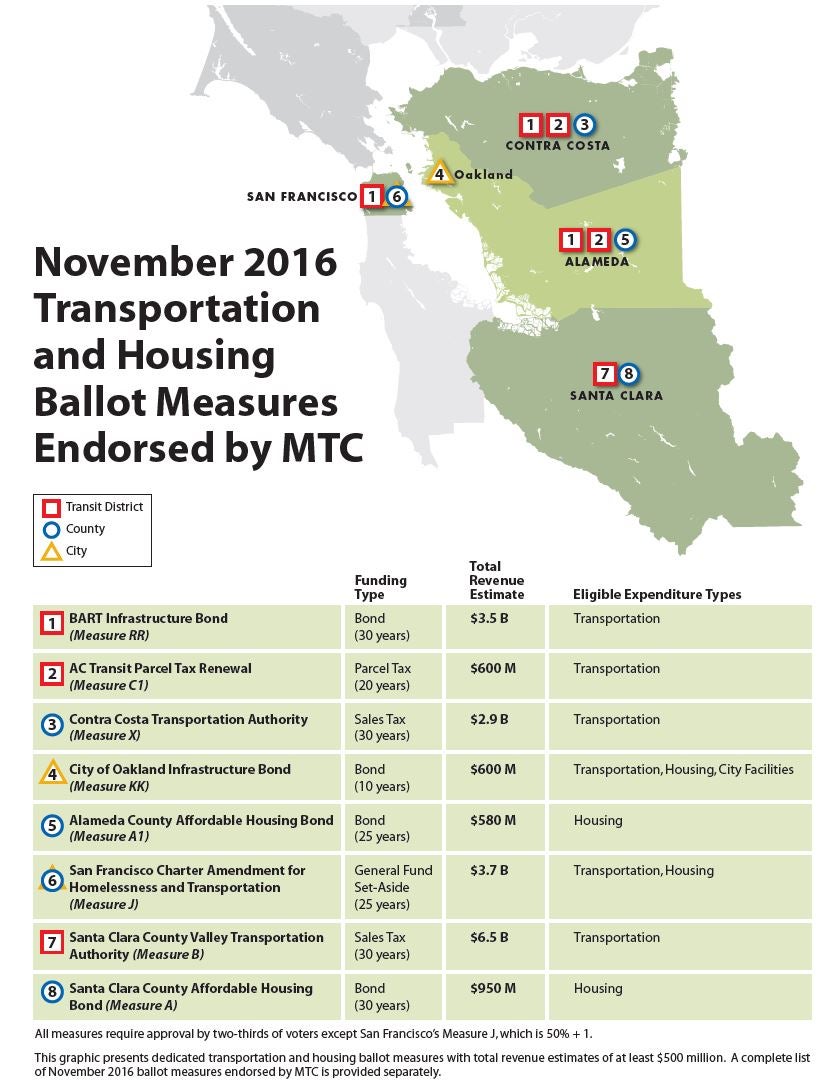 This 30-year, $3.5 billion bond will fund major upgrades to BART’s train control system (improving service frequency), as well as its tracks, power systems, stations, tunnels and other infrastructure. It will also fund projects to improve access to stations and relieve overcrowding, including preliminary engineering work for a second Transbay Tube.

In Alameda and Contra Costa counties, AC Transit is proposing to extend an existing parcel tax for 20 years beyond its current sunset date of July 1, 2019. The current tax of $96 per year, passed in November 2008, provides about $30 million per year for operations and maintenance of AC Transit.

The city of Oakland is proposing a 10-year, $600 million infrastructure bond that includes $350 million for transportation (street, sidewalk, pedestrian, and bicycle and traffic safety improvements), $150 million for facilities and community services (libraries, parks and recreation, fire and police services), and $100 million for housing and anti-displacement projects.

These revenues will address homelessness, bring the San Francisco transportation network into a better state of repair, and fund Muni, BART and Caltrain.

The Santa Clara County Valley Transportation Authority (VTA) is placing a 30-year half-cent sales tax measure on the ballot, which will generate up to $6.5 billion for various transportation projects. These revenues will provide funding for numerous regional projects such as the final leg of the BART extension to Silicon Valley and Caltrain grade separations and capacity improvements, as well as high priority local street and road repairs.

The Alameda County city of Albany has placed on the ballot a parcel tax (Measure P1) dedicated to sidewalk improvements that would raise approximately $200,000 per year for 10 years, for a total of approximately $2 million. Units owned and occupied by low-income persons are exempt, and there is also a rebate for low-income households that rent.

The Contra Costa County city of Martinez has placed a special 0.5 percent 15-year sales tax on the ballot, with the funds dedicated to road maintenance and improvements. The measure would raise a total of approximately $30 million.

The below exhibit shows 11 additional local ballot measures endorsed by MTC where jurisdictions have greater flexibility in the use of funds, although housing and transportation improvements were identified as priority investment areas.

For further details on the individual ballot measures and MTC’s rationale for support, review MTC’s staff’s memos to the Commission in July and September. Additional information on MTC’s opposition to Proposition 53 is available here.

Related:
Affordable Housing, Infrastructure, Transportation, Voting
Comments Submit your comment
Preston Jordan October 15, 2016
Thank you for endorsing Albany Measure P1, MTC. It would be helpful to voters to post the designation for each ballot measure endorsed. Regarding P1, there are some errors and omissions in the description above. It would raise approximately $200,000/year for a total of $2 million over ten years. P1 includes an exemption for low-income households that own their home as stated, and it also includes rebates for low-income households that rent their home.
MTC Public Info... October 25, 2016
Thank you for your comment on the Albany parcel tax. We amended the article to reflect the correct amount to be raised by the measure, and also added a note regarding the rebates for low-income renters. We are currently compiling ballot measure designations to be included as a separate attachment to the story and will provide an update when completed. Thank you again.