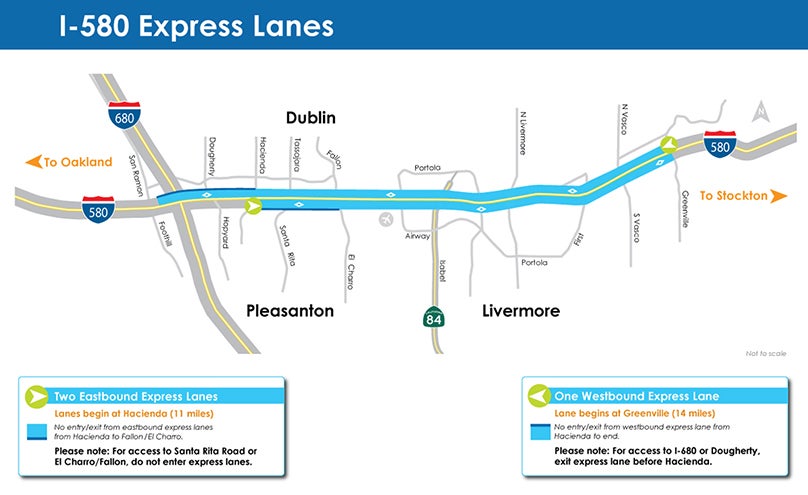 The Interstate 580 Express Lanes will open Friday, February 19, 2016, and Monday, February, 22, 2016, giving drivers a new choice for traveling on I-580 through Dublin, Pleasanton and Livermore. The two eastbound Express Lanes are scheduled to open on Friday, February 19 at 5 a.m., and the westbound Express Lane is scheduled to open on Monday, February 22 at 5 a.m. after final lane striping and overnight removal of all traffic cones. Due to the length of the corridor, each direction requires one night of final preparation work. Final pavement work and opening dates are dependent on good weather.

“I’m very pleased that we are delivering this important project — a new choice for drivers through the heavily congested Tri-Valley corridor,” says Alameda County Transportation Commission (CTC) Chair Rebecca Kaplan, Oakland City Councilmember At-Large. “These three Express Lanes give drivers a greater incentive to carpool (carpoolers can use the lanes for free with a FasTrak® Flex toll tag), while providing benefits to all corridor users.”

Representing the “next generation” of express lanes, the I-580 Express Lanes will feature near continuous access, so drivers can enter and exit at almost any point instead of waiting for dedicated entry and exit zones, and require a FasTrak® toll tag for all users. Tolls are based on congestion levels, and will be visible on overhead gantries throughout the corridor. The I-580 Express Lanes will be free for carpools, vanpools, clean-air vehicles, buses and motorcycles with a FasTrak Flex toll tag set to 2 or 3+. Carpoolers will need to obtain and mount a FasTrak Flex toll tag, a new type of FasTrak tag that allows drivers to designate if they are driving solo or carpooling. FasTrak Flex toll tags can be purchased at Costco, Safeway or Walgreens stores in the Tri-Valley or online at www.bayareafastrak.org. Solo drivers have the option of paying for a more reliable trip with either a standard FasTrak toll tag or a FasTrak Flex set to 1.

Toll revenues will be used first to pay for operating and maintaining the express lanes. Remaining funds will be used for additional transportation projects and transit operations along the I-580 corridor, including express buses and other transit service.

Operated by the Alameda County Transportation Commission and enforced by the California Highway Patrol, the Express Lanes feature two eastbound lanes and one westbound express lane through the Tri-Valley corridor between San Ramon Road/Foothill Road and Greenville Road. They will operate Monday through Friday from 5 a.m. to 8 p.m. Drivers may enter or exit the express lanes anywhere there is skip striping but must not cross the portions of the express lanes where there are double white lines. Drivers in the westbound express lane need to exit the Express Lane before Hacienda in order to access I-680. A period of adjustment and associated delays are expected as drivers familiarize themselves with the new lanes. Ongoing testing is anticipated during the first weeks of operation. Speeds are expected to normalize as drivers adjust to the lanes.

“We are pleased to deliver new transportation solutions with technology. We understand that it might take time for drivers to become accustomed to the new lanes,” says Alameda CTC Executive Director Arthur L. Dao. “We are working on making this new facility operate as smoothly as possible and will make adjustments along the way to address real-time traffic conditions to make the corridor move more efficiently.”

The $227 million project received a mix of federal, state and local funding, including $108 million from Proposition 1B. Since its passage by voters in 2006, more than $18 billion in Proposition 1B funds have been put to work statewide for transportation purposes. 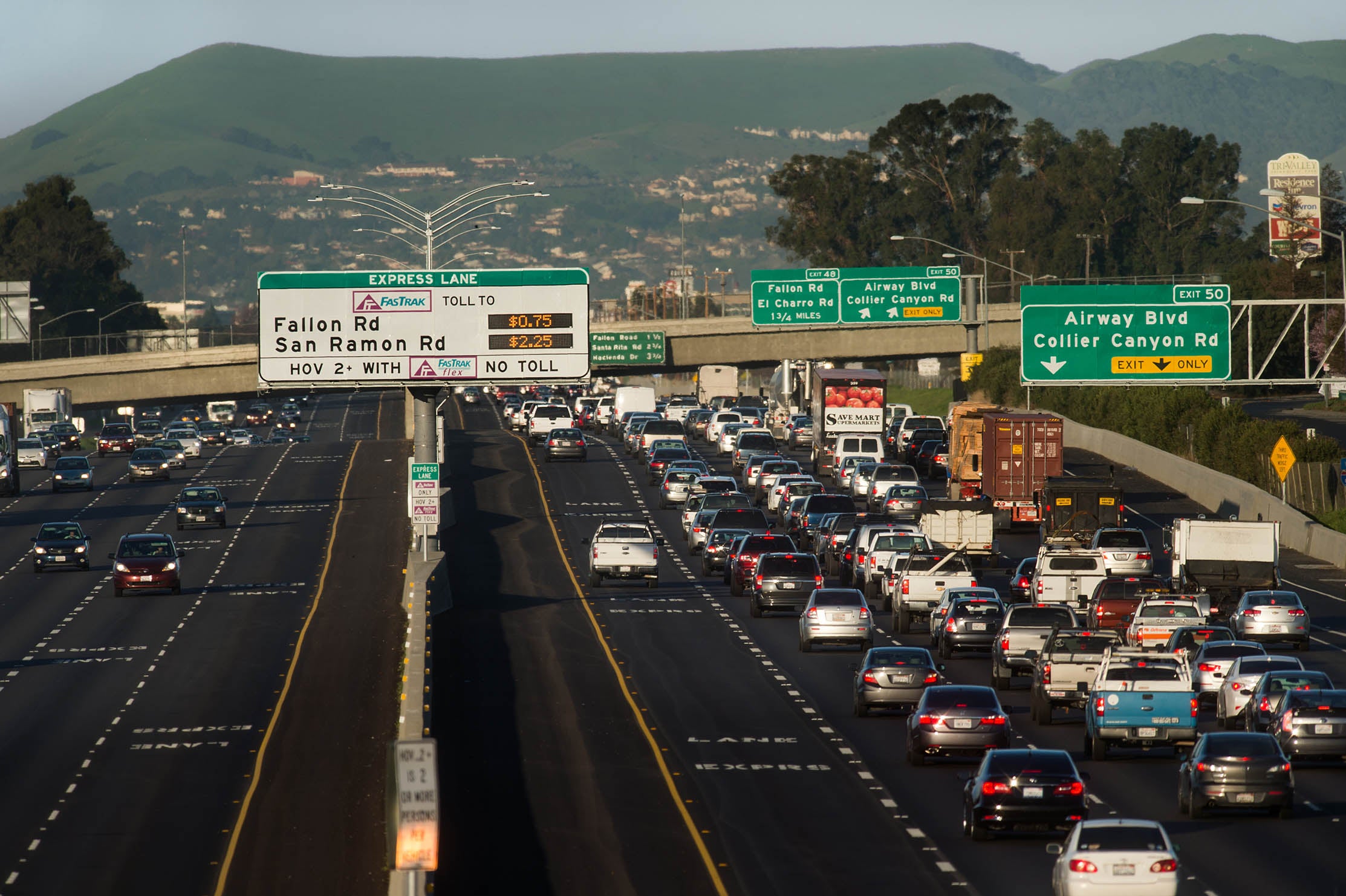 Get the FasTrak® Flex toll tag if you want to travel toll-free as a carpool, motorcycle, or eligible Clean Air Vehicle (CAV) in the new I-580 Express Lanes. The FasTrak Flex toll tag also works as a standard FasTrak toll tag. It pays bridge tolls, Express Lanes as a solo driver and parking at garages displaying the FasTrak logo. See more info and sign up for FasTrak.