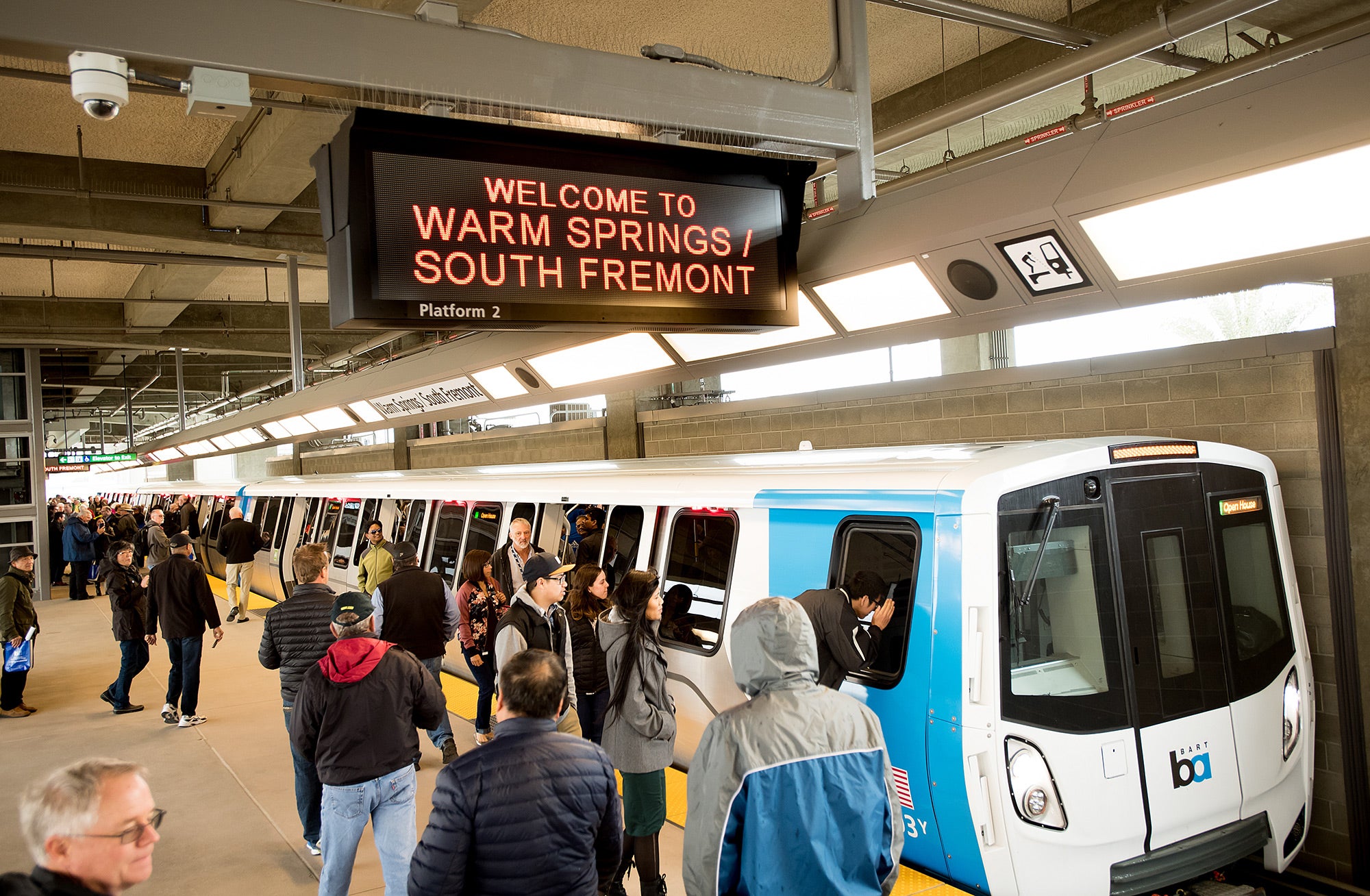 The $890 million Warm Springs Extension, which connects the new station with the 45-year-old Fremont station, comes in at more than $100 million under budget. In addition to serving a fast-growing community, the opening of the new station paves the way for BART to Silicon Valley, a 10-mile Santa Clara Valley Transportation Authority project that’s under construction and expected to open for service later this year.

MTC Vice Chair and Alameda County Supervisor Scott Haggerty, noting that funds administered by the Commission — including revenue from the $1 Regional Measure 2 bridge toll increase approved by Bay Area voters in 2004 — account for a large portion of the Warm Springs Extension funding package, remarked, “MTC is extraordinarily proud to be here today to witness the reward for nearly two decades of hard work. But none of us would be here today if the voters hadn’t consistently shown up when asked.”

BART Director Tom Blalock, who serves Fremont and has been a leader in making the extension a reality, said, “The new station and 5.4 miles of new track will be a difference-maker in addressing the gridlock on interstates 880 and 680 by taking thousands of cars off the road each day. We’re also helping people reduce their carbon footprint by making the station fully accessible to pedestrians, bus riders and bike riders.”

The solar panels installed on the roof of the station and on several parking canopies will produce more than enough energy to meet the station’s daytime power needs. Additionally, BART has installed bioswales that naturally filter silt and pollutants in surface run-off water before it enters the Bay watershed.

Accessibility was also key in the station’s design. The primary entry plaza is linked to pedestrian walkways and bike lanes. Warm Springs/South Fremont Station offers bike lockers and racks on the ground level and bike channels in stairways, making it easier for bicyclists to carry their bikes up and down.

Warm Springs Station marks BART’s first 5.4-mile step closer to Silicon Valley. With beautiful, iconic glass artwork dominating the central rotunda and sweeping views of the East Bay mountains, the station is sure to become a fixture in the community for decades to come. Bicyclists, pedestrians, buses and carpoolers have easy access to drop-off points, with fully accessible zones and features for our disabled riders. Soon, Warm Springs will connect to Milpitas and Berryessa stations – leaving only a small stretch to go before San Jose is fully connected to the rest of the Bay Area.

In keeping with the Federal Transit Administration (FTA) guidelines to incorporate art into mass transit projects, BART has commissioned artwork from Massachusetts artist Catherine Widgery for the new Warm Springs / South Fremont Station. The goals of the BART Warm Springs Extension (WSX) Art Program are to provide a unique identity for the new station and to attract riders by creating more vibrant and welcoming stations. Catherine Widgery's "Sky Cycles" weaves images from differing times of day, times of year, and points of view into large expanses of art glass. The artist's goal is to create artwork that is never the same from any place or time of day. Patrons will find different details and combinations of colors and light each time they visit the station. Fremont's lakes, hills and city skyline serve as the inspiration for the abstract images on the station curtain walls and rotunda.