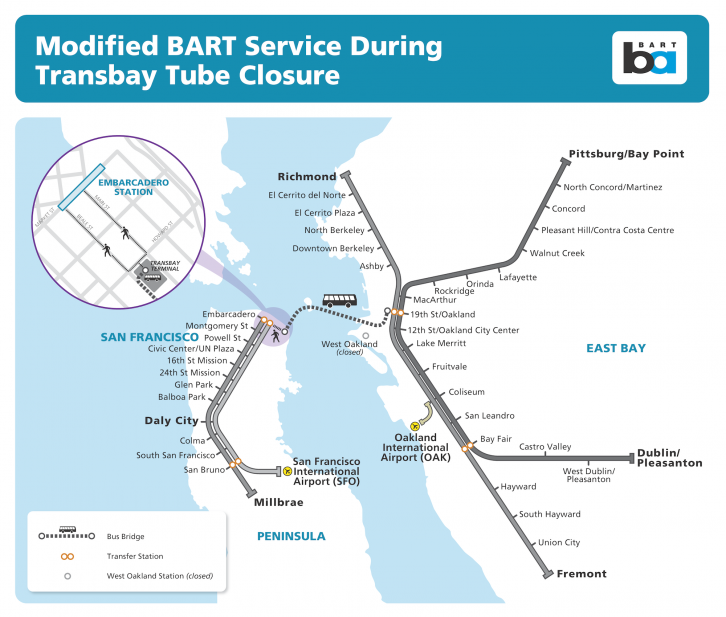 BART is encouraging travelers to plan ahead and to find alternate means of transportation across the Bay during two upcoming closures of transbay train service. BART will close the West Oakland Station and will not run trains between the West Oakland station and San Francisco’s Embarcadero station the first weekend in August and during Labor Day weekend while the system repairs a critical section of track near the Transbay Tube.

BART will offer lifeline bus service between 19th Street in Oakland and the Temporary Transbay Terminal in San Francisco, but the buses are intended only for those who have no other options. The buses will carry customers from 19th Street Station in Oakland to the Temporary Transbay Terminal in San Francisco (a two-block walk to the Embarcadero Station) or from there back to the East Bay. There will be no additional charge for the bus. The bus bridge will cause delays of one to two hours for some customers.

Accommodations will be available for people with disabilities.

There will be some shuttle buses from West Oakland Station, which will be closed, to the 19th Street Station for West Oakland area residents only.

“We understand the interruption in service will be a significant inconvenience for tens of thousands of people but we simply can’t avoid making these repairs,” said BART Assistant General Manager for Operations Paul Oversier. “We need to completely rebuild one of the hardest working sections of track in the entire BART system. Once the work is finished, riders can expect a faster, smoother ride between West Oakland and Embarcadero.”

During the shutdowns, train service within the East Bay and within the West Bay and the Peninsula will be more frequent than during a typical weekend.
— From BART.gov

September 5-7
From end of service Friday and all day Saturday, Sunday and Monday

Getting from Embarcadero BART Station to the Temporary Transbay Terminal

Getting from the Temporary Transbay Terminal to Embarcadero BART Station