Behind the Orange Cone: The Central Subway Reveals the Beginnings of Future Stations | News

Behind the Orange Cone: The Central Subway Reveals the Beginnings of Future Stations 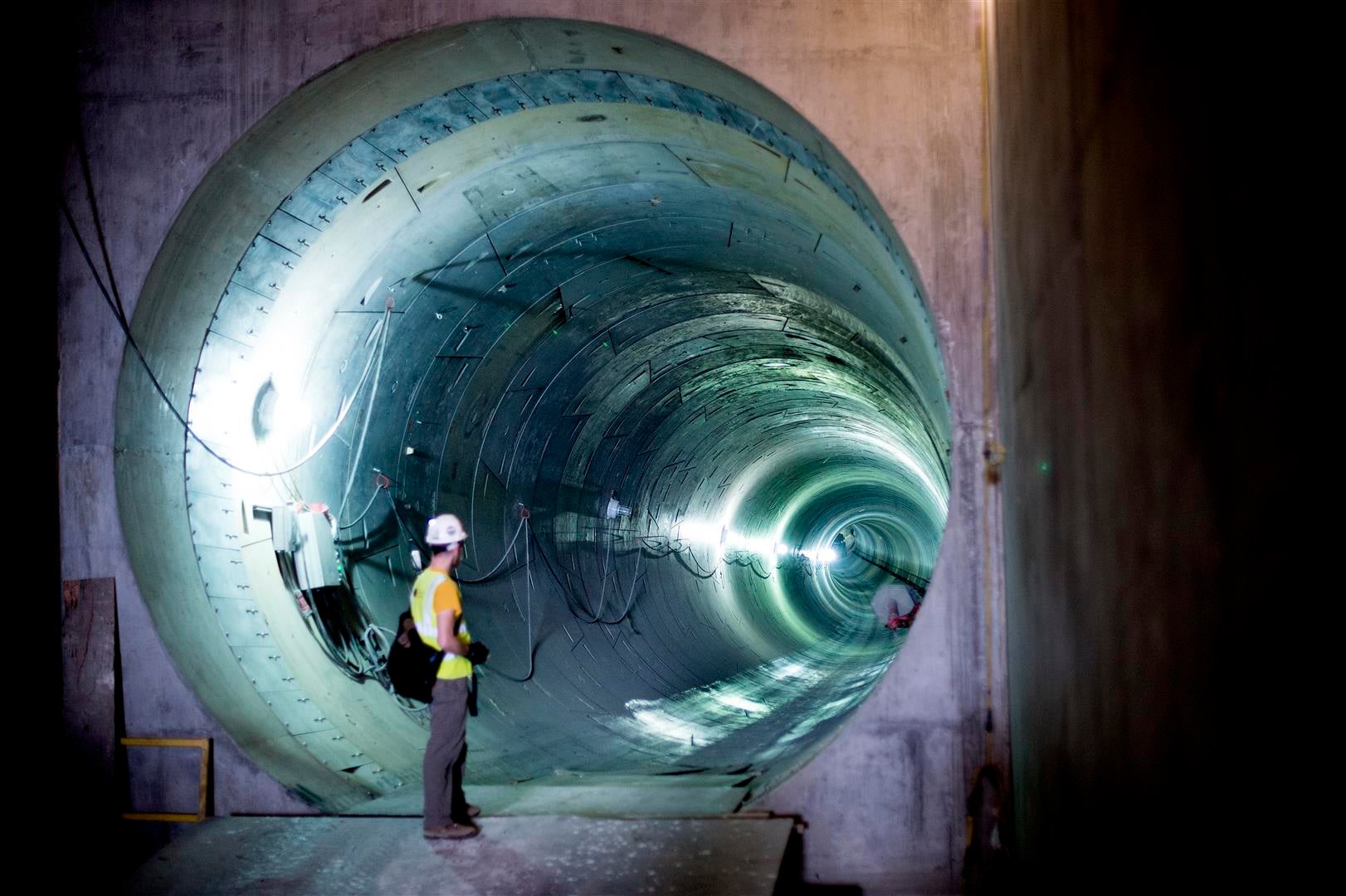 SFMTA's Robert Pierce stands at the entrance of the Tunnel Portal, where the T-Third Light Rail will be lowered underground.

Starting construction in 2013, the San Francisco Municipal Transportation Agency’s (SFMTA) Central Subway project has reached the halfway point on its timeline, with completion expected in 2019. The tunneling work, performed by two 300-foot tunnel-boring machines, was completed in June 2014. Since then, construction teams have been busy excavating and building the structure of future stations along the tunnel’s path. Three underground stations are beginning to take shape below SF’s busy streets and a fourth above-ground station is also under construction.

SFMTA is currently building Phase II of the T-Third Light Rail Line, which extends the line 1.7 miles north from the 4th and King station to Chinatown.The T-Third is the first line to run north to south on Muni’s light rail system,connecting neighborhoods to major retail, cultural, sporting and transit centers. Phase II of the project will significantly cut travel time, connecting passengers from Caltrain to Union Square in under eight minutes and connecting passengers from Chinatown to Union Square in two minutes.

4th and Brannan Station
Two blocks north of the 4th and King T-Third station and the adjacent Caltrain station will be the 4th and Brannan surface station. The new station platform will be designed in the same green and white-striped style as the existing stations along Third Street, but will feature dynamic artwork on a 40-foot marquee pole that will rotate with fluctuating wind patterns. During Labor Day 2015, crews began to lay tracks northward from 4th and King to the future station. Once utilities are completed, crews will continue to lay track northward to the Tunnel Portal at 4th and Bryant, where trains will start to descend underground.

Yerba Buena/Moscone Center Station
Continuing northbound, trains will head to the first underground station — Yerba Buena/Moscone Center Station. Crews have excavated to the mezzanine level and are working to excavate down to the tunnel/station platform level. This station is being excavated with a cut-and-cover method, in which a trench was excavated and a steel frame was built immediately afterward. Crews have built horizontal pillars to prevent the structure from caving in and are currently building out each level. When completed, the station will feature historic photos of the construction of the Moscone Convention Centers.

Union Square/ Market Street Station
The Union Square/Market Street Station will connect passengers to the retail heart of San Francisco and to a major Muni transit hub, Powell Station, where passengers can transfer to BART and other Muni light rail lines without going above-ground. Currently, crews are already building out the northern and southern concourse levels, and are working on excavating down to the tunnel level. Once completed, the station will feature artwork using hundreds of translucent panels illuminated by colored lights.

Chinatown Station
Unlike the other stations, the northern terminal at Chinatown station is being excavated by a mining technique because crews are digging under a high-density residential area in a historical district. To stabilize ground conditions and increase safety for workers, crews are shooting a water and concrete mixture through drilled holes to stabilize unexcavated dirt. Once completed, the Chinatown station will be adorned with traditional red Chinese paper-cutting art, which will guide passengers through the station's signature arch and onto the station platform.

SFMTA’s Central Subway Media Producer Robert Pierce, one of the writers who maintains the construction blog, reports, “Construction is going very well. So far, the project is on schedule and on budget.” Right now each station is deep in the middle of excavation and construction, but by 2019, each station will be transformed into beautifully designed structures that emphasize light, openness and transparency. In the third and final phase of the T-Third, the route hopes to be extended further to another tourist hotspot, the North Beach, pending the City’s approval.

As a key advocate, MTC helped secure $942.2 million from Federal Transit Administration’s New Starts Program and allocated $41 million from the U.S. Department of Transportation Congestion Management Air Quality Fund to the fund the Central Subway. The project is primarily funded by federal sources with the remaining from state and local sources.