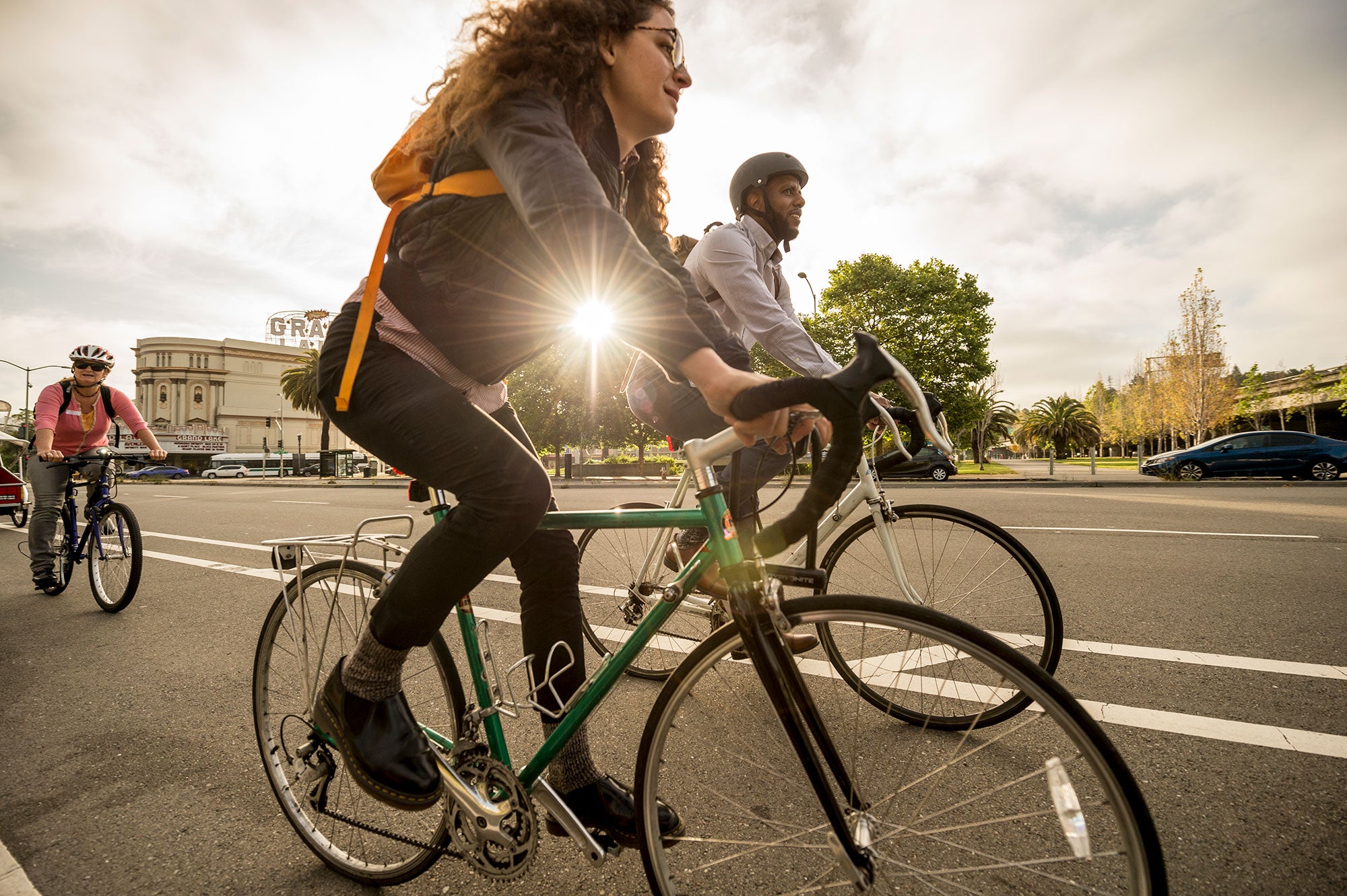 The 24th annual Bike to Work Day (BTWD) traversed the nine counties of the San Francisco Bay Area on Thursday, May 10. Under blue skies and soft breezes, most riders stopped to pick up treats and this year’s tote bag at one of 400 energizer stations staffed with dedicated volunteers from bike coalitions, local companies and governments. Nearly 100,000 pedalers strong, the riders turned a typical May Thursday morning commute into a rolling celebration of bike riding.

Presented by the Metropolitan Transportation Commission (MTC), 511.org and Kaiser Permanente, Bike to Work Day encourages Bay Area residents to leave their cars at home or skip the bus/train/ferry for the day and commute on two wheels — for the first time or the umpteenth time.

“It’s very practical for people to ride their bike to work when you live within a few miles of their job as I do,” said Rohnert Park Mayor and MTC Commission Chair Jake Mackenzie. “Get out of the single occupancy vehicles that cause a lot of the congestion on our roads. Give it a shot. This is beautiful weather and it is fun to be on your bike on a day like today!” On BTWD 2018, Mackenzie biked to an economic briefing in his home city, then continued on to his office.

According to Tracey Jones, a Santa Rosa-based Kaiser Permanente doctor specializing in physical medicine and rehabilitation, "If you're just starting out bike commuting, start small – just ride once a month or once a week at first. You don’t have to go from driving everywhere to biking everywhere to make a difference. If we can just get people to stop and ask the question of whether they could bike to their destination rather than drive before just jumping into the car – THAT alone would be revolutionary.” Jones was just awarded as Sonoma County’s Bike Commuter of the Year for 2018 for her commitment to bicycling.

Bike to Work Day is the largest event in the Bay Area’s celebration of May’s National Bike Month, but there are many other events and activities held during the month. Running through May 31, the month-long Bay Area Bike Challenge is a friendly competition that encourages participants and companies to ride individually and as teams to get more people to commute by bicycle. Having just completed 9 days of the challenge, over 2800 riders from across the Bay Area have been pedaling and racking up miles and virtual prizes every day! More information is available at lovetoride.net/bayarea.

In addition to MTC (the transportation planning, financing and coordinating agency for the nine-county San Francisco Bay Area), 511 (the region’s traveler information system) and Kaiser Permanente, Bike to Work Day 2018 receives regional support from the Bay Area Air Quality Management District (BAAQMD), Bay Area Rapid Transit (BART), Clear Channel Outdoor, Clif Bar, Ride Report and Exodus Travel, as well as from many sponsors at the local level. Bike to Work Day’s media sponsor is NBC Bay Area-KNTV/Telemundo 48. Prizes for the Bike Commuter of the Year winners were donated by the Association of Bay Area Governments (ABAG), Chipotle and Mike’s Bikes. Day-of 2-for-1 promotion provided by Chipotle. The event is made possible through the cooperation of thousands of volunteers, county congestion management agencies, local jurisdictions, local bicycling coalitions and MTC.

In addition to the nearly 100,000 riders these MTC Commissioners, local politicians, and notables also participated in BTWD 2018: