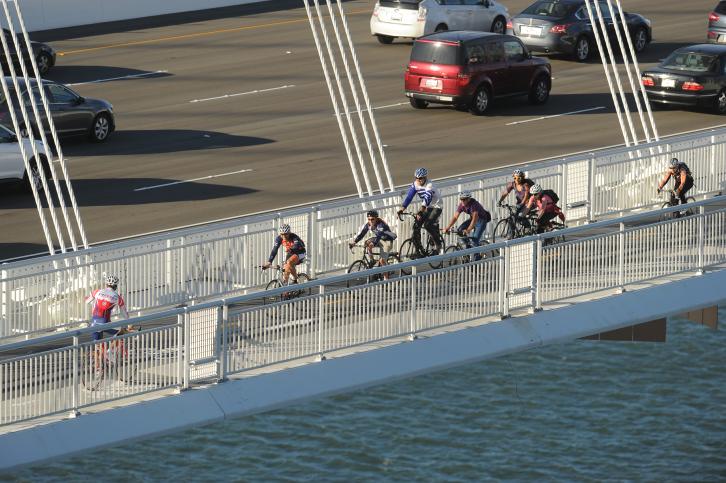 MTC’s major projects and programs, which include funding, planning, policy and outreach include:

MTC administers the region’s share of the Active Transportation Program (ATP) funding – which allows cities counties, transit agencies and other public agencies to compete for grants to build bicycle/pedestrian paths, install bike racks and other projects and programs that make walking or biking easier, safer and more convenient.

The bridge paths counter data show how many people are crossing the region’s state-owned bridges by bicycle and on foot.

In 2006, MTC adopted Resolution 3765 - MTC’s Regional Policy for Accommodation of Bicycle and Pedestrian Facilities During Transportation Project Planning, Design, Funding and Construction - also known as MTC’s Complete Streets Policy. MTC adopted this policy to make provisions for travelers who walk and bike as part of project planning and design work.  It established the Complete Streets Checklist, and required OBAG sponsors to pass a Complete Streets Resolution or update circulation elements of General Plans after January 1, 2010.

MTC is working to increase bicycle and micromobility trips in the region through the Bay Wheels regional bike share program as well as our Bike Share Capital Program.

For MTC, micromobility encompasses all small fully or partially human-powered vehicles (both personal and shared-use fleets) such as bikes, e-bikes and e-scooters, as well as specialized vehicle types such as cargo bikes, mobility-assistance devices, wheelchairs, accessible bikes and scooters.

MTC is the contract administrator for this 7,000+ regional bike share system. Bay Wheels is owned and operated by Lyft, in partnership with MTC and the cities of Berkeley, Emeryville, Oakland, San Jose and the city and county of San Francisco.

The goal of this program is to expand bicycle access and use through bike sharing, and to facilitate bicycle transportation in connection with transit. MTC has awarded bike share grants to the cities of Fremont and Richmond and along the SMART Corridor in the counties of Marin and Sonoma.

In June 2020, MTC passed the MTC Regional Safety/Vision Zero policy which established a region-wide policy of intent to work with our partner agencies to encourage and support actions towards eliminating traffic fatalities and serious injuries in the Bay Area by 2030.

Bike to Work Day is the centerpiece of National Bike Month, recognized each May since 1994. Over the years, Bike to Work Day has grown into a month-long program of events promoting bikes as a healthy, fun and viable mode for everyday transportation. MTC has been a proud Bike to Work Day sponsor for over two decades. MTC also works closely with all of the Bay Area’s bicycle coalitions to stage the annual Bay Area Bike to Work Day program.

The Bay Trail is a plan for a continuous 500-mile network of bicycling and hiking trails that will encircle San Francisco Bay, San Pablo Bay and the Carquinez Strait. When completed, the trail will run through all nine Bay Area counties, connecting cities and towns with the shoreline and with each other. The San Francisco Bay Trail is a project of MTC and the Association of Bay Area Governments.