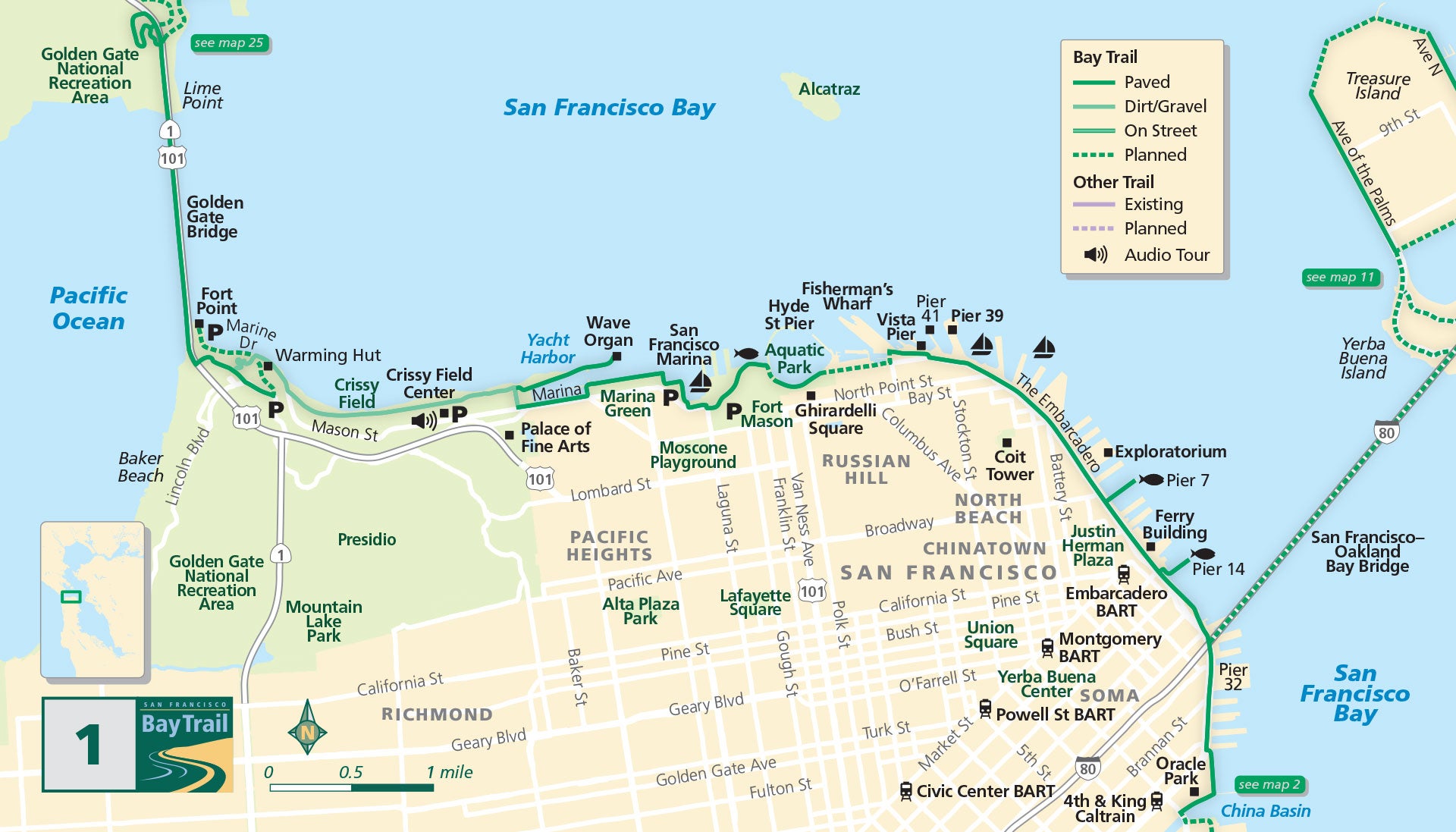 Did you know that nearly the entire San Francisco bayfront is manmade?

Beneath your feet lie abandoned ships, excavated hilltops, rotting piers and rubble dumped into the bay after the 1906 earthquake and fire. Discover one of the world’s most inviting urban waterfronts.

Beginning at iconic Fort Point under the Golden Gate Bridge, follow Marine Drive southeast along the water, passing the Warming Hut. A natural-surface trail hugs the shoreline through Crissy Field along restored wetlands and sand dunes. A paved path is available inland of the marsh along Mason Street.

Climb the hill into historic Fort Mason, back down to equally historic Aquatic Park and continue along the shoreline to Fisherman’s Wharf. A gap in the Bay Trail at Fisherman’s Wharf means there are no bicycle lanes between Hyde and Powell streets.

Head east past Pier 39, follow the Embarcadero promenade along the shoreline and stop at Pier 7 for views of the San Francisco–Oakland Bay Bridge, Treasure Island and Yerba Buena Island.

Once you pass the magnificent Ferry Building, take a trot out to the end of Pier 14, and continue south under the Bay Bridge. The path curves along the edge of South Beach Harbor and follows the shoreline around Oracle Park, home of the San Francisco Giants baseball team. Watch an inning for free from the stadium’s public viewing area.

The northern bayfront from Hyde Street to the ocean is almost entirely within the Golden Gate National Recreation Area, the first urban national park in the U.S. See Map #11 for Treasure and Yerba Buena islands.

Bike into Sausalito over the Golden Gate Bridge, see the sights, and then take the ferry back to Pier 41 in San Francisco. To access the Fort Baker Bay Trail from the east sidewalk of the bridge, use the stairs from the Vista Point parking lot and cross under the span.

Crissy Field is a great place to gather with friends and family across a picnic table. Bring a basket, enjoy the scenery and catch a spectacular sunset from East Beach or the West Bluffs.

Only slightly less hectic than the Embarcadero, the Marina Green regularly hosts soccer, Frisbee, sporting and food events. Check out the beautiful boats in the marina, and the houses lining Marina Boulevard made famous by the Loma Prieta earthquake in 1989.

An approximately 2.5-mile walk (each way) from the foot of Fort Mason to the Warming Hut at Crissy Field. This flat shoreline walk features amazing views and both paved and natural surfaces.