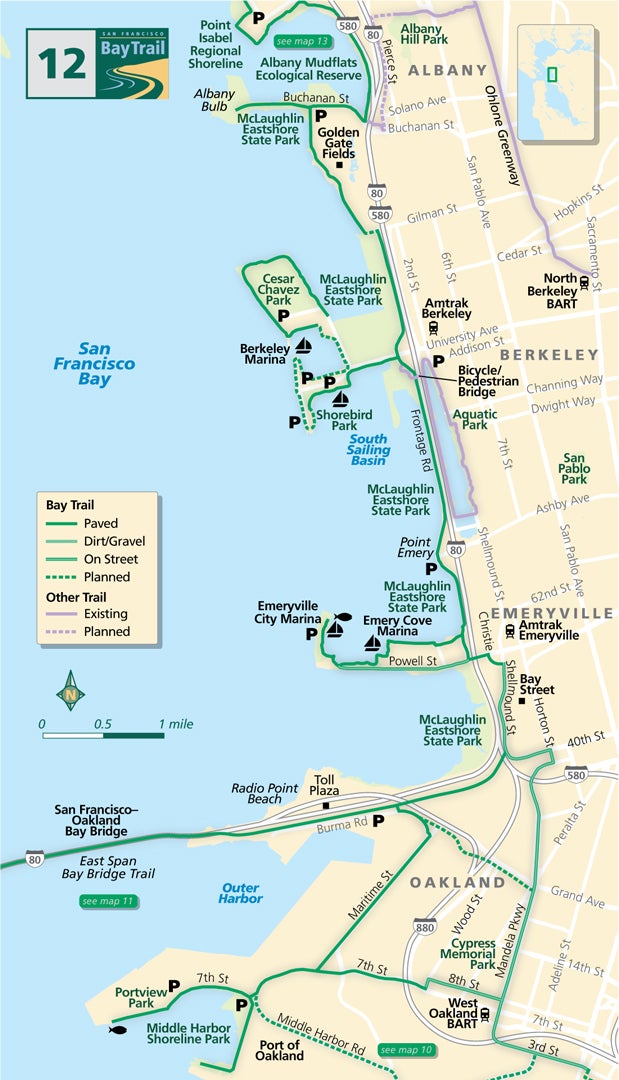 In West Oakland, the Bay Trail follows streets through the busy trade and transportation zone of the Port of Oakland.

Along 3rd Street, the bike lanes and sidewalks curve under the web of highway overpasses to Mandela Parkway. At 8th Street and Mandela, the trail splits. One leg heads toward the heart of the Port to Middle Harbor Shoreline Park and Portview Park. Breathtaking views of the Bay Bridge and the San Francisco and Oakland skylines can be seen from almost everywhere in these parks with the observation tower at Middle Harbor offering the most spectacular birds-eye views.

At 7th Street, take the path along Maritime Street north through a busy port area to the Bay Bridge Trail. From 8th Street and Mandela, the trail route heads north along Mandela Parkway to Emeryville.

Follow Mandela Parkway through the industrial zone of West Oakland, stopping to visit Cypress Memorial Park built in memory of those who lost their lives here in the 1989 Loma Prieta Earthquake.

Mandela Parkway terminates at the East Baybridge shopping center. Head left on Horton Street and left again on 40th Street to ramp over the railroad tracks. Where 40th Street turns into Shellmound Street, look for another entry to the Bay Bridge Trail to Yerba Buena Island. The Judge John Sutter Regional Shoreline park at the base of the Bay Bridge serves as an entry point to the path on the bridge.

This is the southern edge of McLaughlin Eastshore State Park, named for Save the Bay co-founder Sylvia McLaughlin. The trail passes Point Emery on its way to Berkeley, where it ducks under the Berkeley bicycle/pedestrian bridge over Interstate 80.

Rounding the edge of Golden Gate Fields, the Albany Mudflats Ecological Reserve is straight ahead. To your left is the Albany Bulb, popular for its spectacular views of the bay and found art exhibits.

The Bay Trail continues north, squeezing between Interstate 580 to the east and the Albany Mudflats to the west, en route to Richmond.

At the end of Powell Street and Marina Park at Emeryville Point, you’ll find the Emeryville Fishing Pier which was built on top of a breakwater for the Emeryville City Marina. Easy to access, spend a lazy day fishing and watching sailboats go in and out of the Marina.

At the Shorebird Visitor Center you’ll find aquariums and displays on local aquatic species, marine mammals and birds. The building is the first municipal strawbale building in the U.S. and provides information to visitors concerning recreation and marine conservation and education.

This popular walk from University Avenue to Shorebird Park in Emeryville runs along the bay and provides stunning views of the bay and the Golden Gate and San Francisco-Oakland Bay bridges. It’s just under 2 miles each way for a total of 4 miles roundtrip.

Popular with windsurfers and kayakers, this boat launch provides scenic access to the bay, with stunning views of the Bay Bridge and Golden Gate Bridge in the distance. Enjoy a picnic at Shorebird Park or a meal at one of the Marina’s several restaurants afterwards!