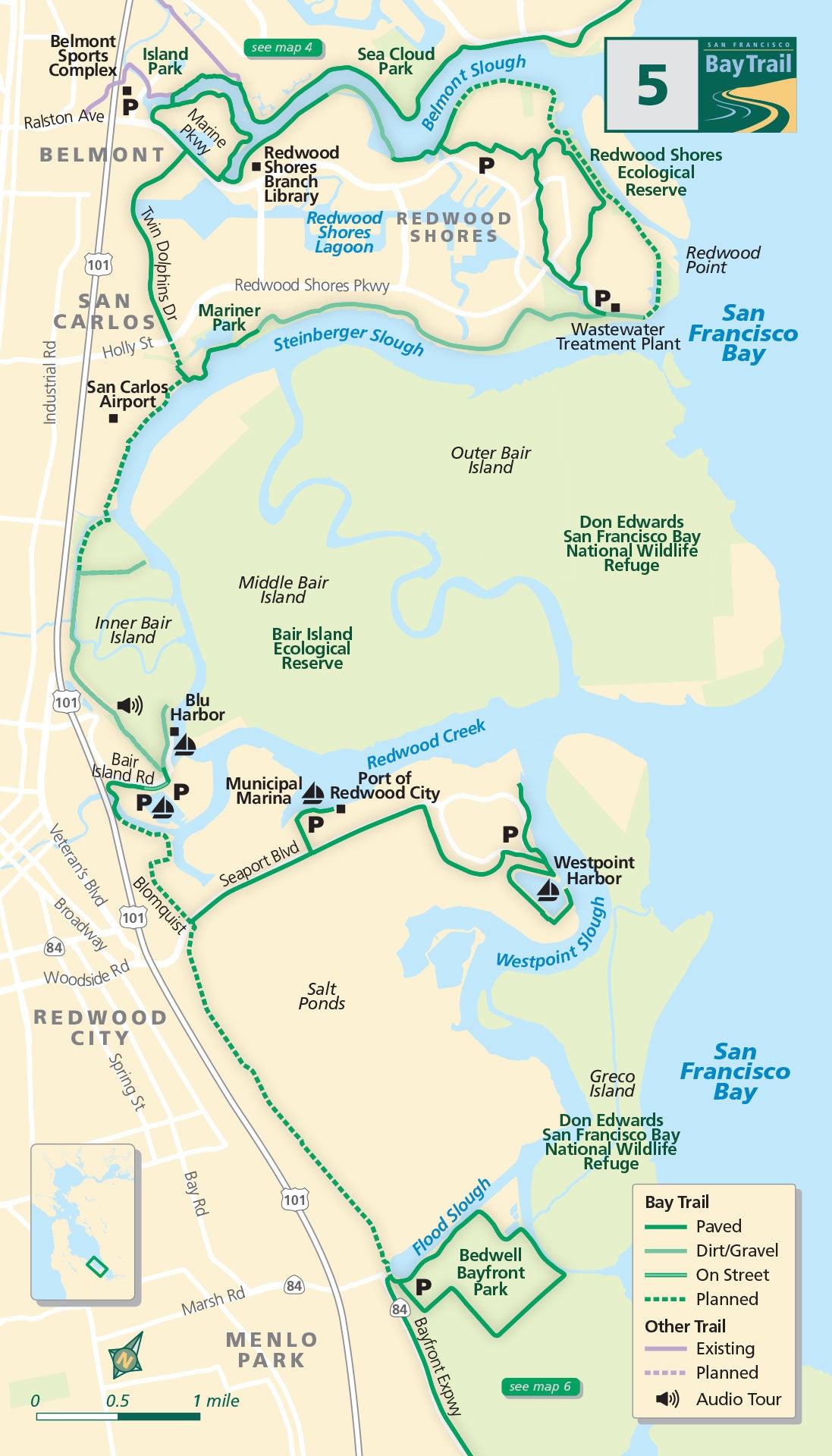 A paved trail stretches along Belmont Slough, passing office parks and a branch of the Redwood Shores Branch Library, which features interactive exhibits about the bay and shoreline habitat.

Along Steinberger Slough, a gravel trail atop a levee stretches from a wastewater treatment plant to San Carlos Airport. At low tide, the slough transforms into a mud flat busy with feeding shorebirds. The trail terminates at the San Carlos Airport.

Bair Island Ecological Reserve is made up of three islands: Inner, Middle and Outer. The 3,000-acre wetland complex is part of the Don Edwards San Francisco Bay National Wildlife Refuge and is managed by the U.S. Fish & Wildlife Service.

Restoration of over 1,400 acres at Inner Bair Island to tidal wetlands is underway. A section of the Bay Trail (including a bicycle and pedestrian bridge to Inner Bair Island) has been constructed as part of the restoration. A trail along Bair Island Road leads to a bridge over Redwood Creek.

Adjacent to Seaport Blvd, travel along the paved pathway towards the bay, past the Port of Redwood City, the only deep water channel in southern San Francisco Bay. At the tip of Seaport Boulevard, the trail extends around the Pacific Shores Center office complex and Westpoint Harbor along restored wetlands.

To the north and south are former salt ponds. Bayward, Greco Island’s marshes are part of the refuge.

Located in Redwood Shores, Mariner Park is host to several sculptural art-park benches that serve as inspiring resting spots along the trail.

Ride 17 miles in one direction through three cities along a continuous, mostly paved Bay Trail including towering Eucalyptus and an elegant bicycle/pedestrian bridge to restored wetlands teeming with shorebirds.

Grab your binoculars and explore a shorebird paradise at the restored wetlands of Inner Bair Island, part of the Don Edwards San Francisco Bay Wildlife Refuge. The Bay Trail leads to raised observation platforms with views out over 1,400 acres of new vegetated marsh.