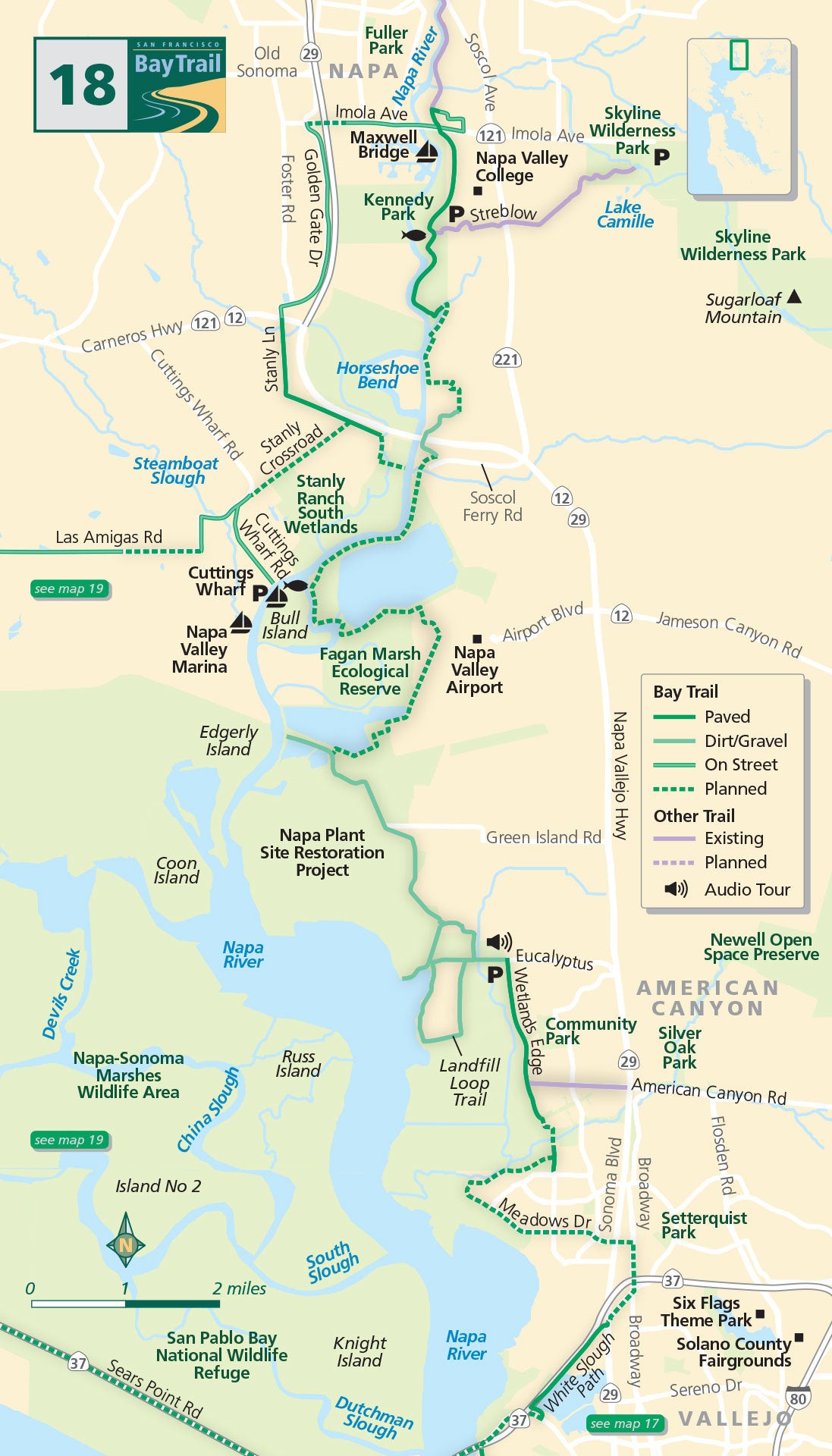 As you head north from the White Slough Path and into Napa County, the Wetlands Edge Bay Trail in American Canyon provides a bevy of birds and expansive marsh views.

The Landfill Loop Trail, as its name suggests, skirts a closed landfill and yet allows for a beautiful and remote recreational experience.

As part of ongoing efforts to restore wetland habitats around San Francisco Bay, the California Department of Fish and Wildlife completed the 1,400-acre Napa Plant Site Restoration Project, which included 3 miles of levee-top Bay Trail just outside the city of American Canyon.

Please note that no dogs are allowed from March 2 through June 30.

From Kennedy Park in Napa, 6.5 miles of nearly complete Bay Trail (there’s a small gap on Imola Avenue at the Highway 29 entrance — use caution) exist via a combination of riverside multi-use paths and bike lanes.

The Napa Valley Vine Trail — a planned 47-mile walking and cycling path from Vallejo to Calistoga — shares the Bay Trail alignment in northern Vallejo and in Kennedy Park, then continues north into downtown Napa while the Bay Trail heads west.

For a trip into town or points north, continue straight under the Imola Bridge. The more rural roads of Napa County, starting at the north end of Golden Gate Drive, have intermittent bike lanes but no sidewalks for pedestrians.

The Stanly Lane path just south of Highway 12/121, is a lovely eucalyptus-lined roadway converted to a blissfully car-free conveyance (though the pavement is a bit rough). Heading west on Stanly Crossroad through bucolic vineyards is delightful despite the lack of official bike lanes or sidewalks.

Take the Cuttings Wharf Bay Trail down to the Napa River and launch a kayak at this designated Bay Area Water Trail site.

As you head towards Sonoma County on Las Amigas Road, bike lanes end 0.75 miles after Cuttings Wharf Road. However, this remains a popular route for the more experienced cyclist.

The marshland habitat along the river at this well-developed park provides many birding opportunities, and a boat ramp and dock allow access to the water to bird from kayaks, canoes and other watercraft.

From the trailhead at Eucalyptus Drive and Wetlands Edge Road, this approximately 6-mile (each way) mostly gravel surface trail is a delightful cruise adjacent to the Napa River, restored wetlands, interpretive panels and lots of wildlife. Loop and shorter options are available. A mountain bike or other non-skinny-tired bike is recommended.

These relatively new segments of trail are the result of two different types of reclamation: The Mike Thompson loop trail encircles a capped landfill, and the trail heading north along the Napa River abuts restored salt ponds. Head out to Glass Beach for a taste of solitude.

Cuttings Wharf is a boat launch that provides a scenic launching point for exploration of the Napa River and Napa-Sonoma marshes. This rural location on the Napa River is popular for kayaking and fishing.