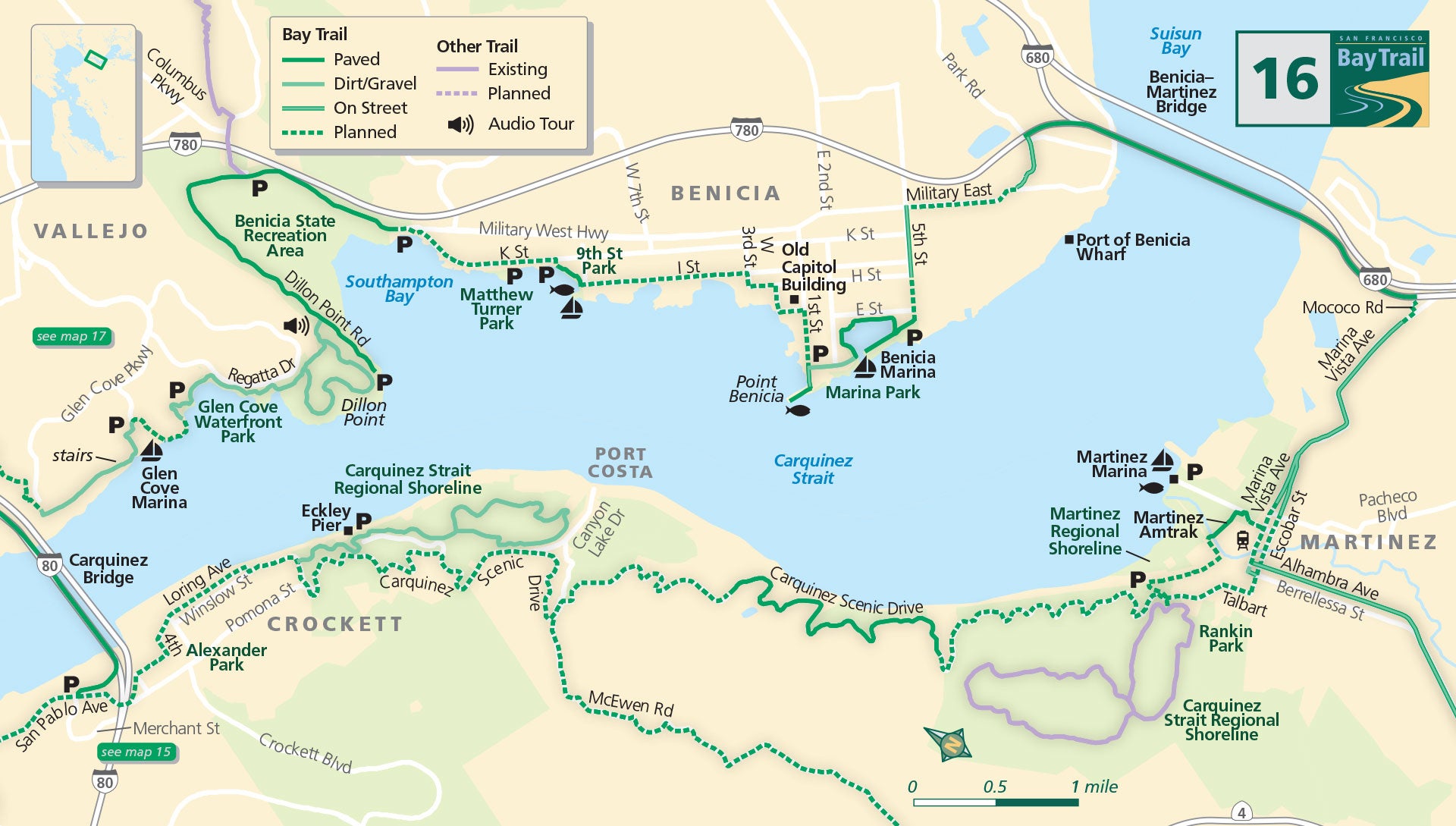 Where the San Francisco Bay meets the Delta, the Bay Trail will one day encircle the entire Carquinez Strait.

Bookended by the existing Bay Trail on the Carquinez Bridge and the Benicia-Martinez Bridge, the route offers a bevy of varied sights and sounds, as well as bird’s eye views of the Carquinez Strait and surrounding landscape.

The pathway on the Carquinez Bridge is accessed from the intersection of San Pablo Avenue, Pomona and Merchant streets. The Bay Trail is not yet complete through Crockett and along Carquinez Scenic Drive, but loop trails high above the water in Carquinez Strait Regional Shoreline offer spectacular views.

Between Port Costa and Martinez, a 1.7-mile stretch of Carquinez Scenic Drive has been converted to the George Miller Regional Trail which provides spectacular views of the Carquinez Strait.

From this trail, you can watch boats cruising through the strait, trains running along the shore below and hawks flying overhead.

In Martinez, the Bay Trail follows city streets downtown, with a spur trail into Martinez Regional Shoreline. Access to the Benicia-Martinez Bridge pathway from Martinez is off Mococo Road just west of Interstate 680.

Once on the Benicia side of the Carquinez Strait, head west on bike lanes and sidewalks along Park Road, and follow signs toward the Benicia Marina and downtown. Several bike lane gaps along the Bay Trail exist in Benicia, but riding on-street is not difficult for the experienced cyclist.

A paved path encircles the Benicia Marina. Venture out to the tip of the Point Benicia (at the end of Benicia pier) before heading up 1st Street and jogging your way along residential streets until you reach the shoreline path at the end of West K Street.

This path will take you into Benicia State Recreation Area, which connects on the western end to the bayside trail at Glen Cove Waterfront Park in Vallejo. A lovely-if-incomplete segment of trail from the Glen Cove Marina allows hikers to scale stairs to the bluff above the bridge.

To reach the Carquinez Bridge from here, use Vallejo city streets.

This 4.6 mile (each way) paved and gravel/dirt surface ride begins at either Glen Cove Waterfront Park or at Benicia State Recreation Area, and is best ridden on a mountain bike or other non-skinny-tired bicycle.

This pier is located east of Crockett on the south shore of the Carquinez Strait, where people come to try to catch sturgeon and striped bass. While you try your luck, enjoy watching the cargo ships, tankers and recreational boats sailing by in the strait.

An approximately 3 mile walk (each way), the trail is both paved and natural surface, and offers great views of the Carquinez Strait. Not steep, but not entirely flat.