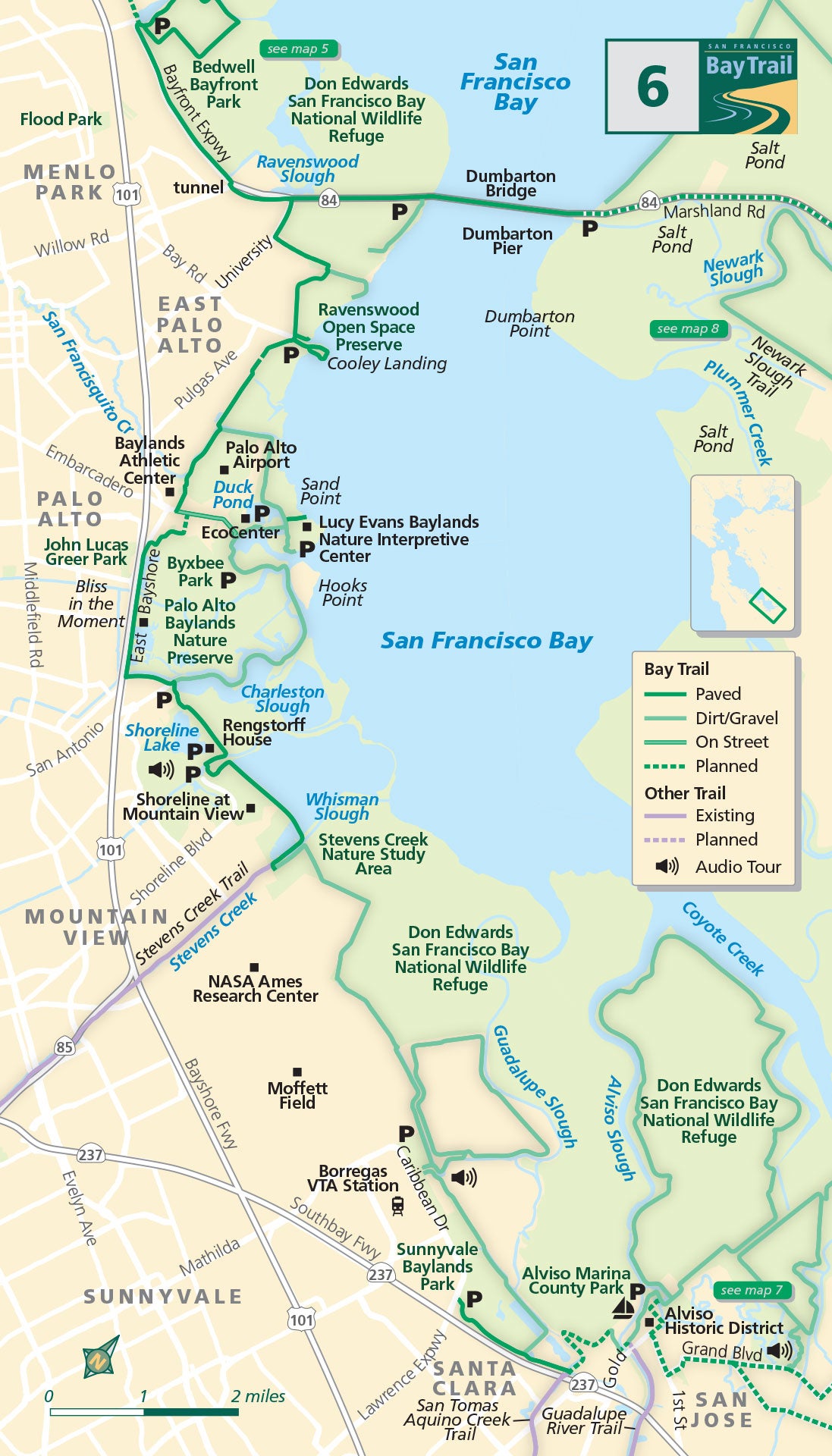 From University Avenue, the bicycle/pedestrian path on the Dumbarton Bridge is straight ahead. Near the bridge, a 0.7-mile spur trail hugs the edge of restored wetlands.

At the bridge over San Francisquito Creek, the trail splits into two different Bay Trail routes. For the shoreline route, head into the Palo Alto Baylands along the gravel path that leads to the Lucy Evans Baylands Nature Interpretive Center, Palo Alto Baylands EcoCenter and Byxbee Park.

For the inland route, continue straight from San Francisquito Creek on the paved path and follow streets to pick up the paved path that extends along the edge of East Bayshore Road. Don’t miss “Bliss in the Moment” — a sculpture dedicated to former Bay Trail Board member and bicycle advocate Bill Bliss.

In Shoreline at Mountain View, a paved path extends the length of the park past the historic Rengstorff House to the Stevens Creek Nature Study Area.

The Stevens Creek Trail extends over 5 miles to downtown Mountain View and beyond. Follow the natural surface path behind Moffett Field for unique views of this former Navy facility and the wetland habitats along its edge.

Alviso Marina County Park, a former marina, has been restored to wetlands but you can still launch a boat here. A 9-mile dry season loop trail extends around the former marina.

Dogs are not allowed in Ravenswood Open Space Preserve, Shoreline at Mountain View, behind Moffett Field, or in Sunnyvale Baylands Park.

This well-established preserve is one of the best bird-watching destinations in the Bay Area. The marshlands are host to a sizable local population of shorebirds and a migratory stopover on the Pacific Flyway.

Designed by dog owners, this park provides dogs with an opportunity to run and play off leash. The park is located on the corner of Shoreline Boulevard and North Road, just before the entrance to Shoreline Park (which does not allow dogs).

Over 70 acres of parkland is dedicated to active recreation and picnicking. Two large group picnic areas can seat 325 people and four small group picnic areas each seat 60-130 people. A large grassy field, a children’s play area and miles of Bay Trail make this a popular park for family gatherings. Pets are not allowed in the park.