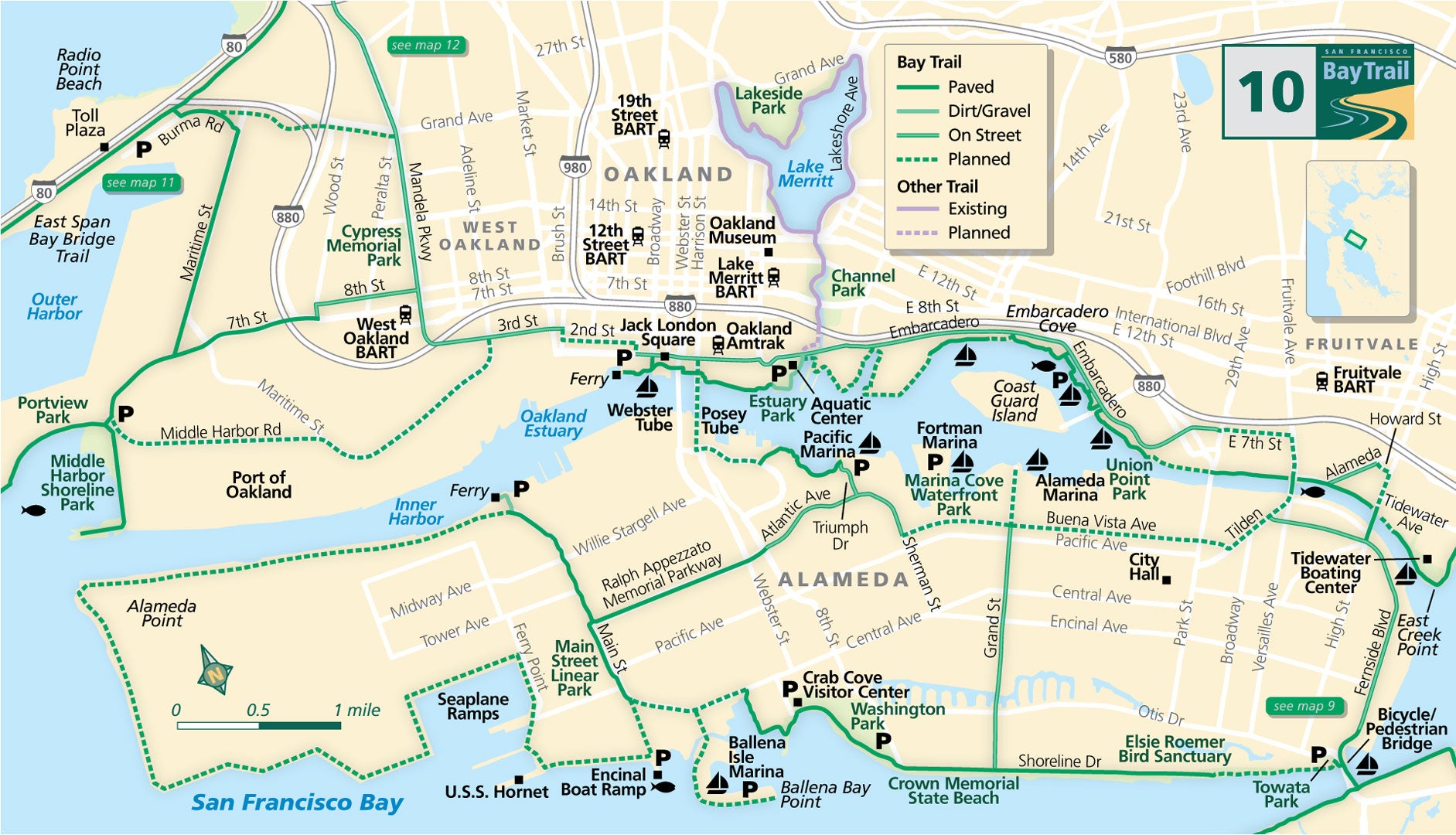 There is much to discover along the Alameda and Oakland shorelines, including the bay’s largest active port, beaches, historical sites and stretches of trail with delightful views.

Beginning in Alameda’s Towata Park at the base of the Bay Farm Island Bridge, enter the Elsie Roemer Bird Sanctuary, stopping to view shorebirds and waterfowl from observation platforms.

Continue on 2.5 miles of paved trail along Crown Memorial State Beach, the bay’s largest and warmest beach. Near McKay Avenue, you’ll find the Crab Cove Visitor Center, a great place for kids to learn about the bay with hands-on classrooms in Crab Cove.

The Bay Trail traverses Main Street Linear Park on the way to the Alameda Main Street Ferry Terminal. Although the city of Alameda has long-range plans for a shoreline trail along the Estuary to encircle the island, you will need to use city streets on the northern and eastern sides of Alameda, and on part of the western side.

From the east end of Alameda, jump over to Oakland on the Fruitvale Bridge or the High Street Bridge. The Oakland Waterfront Pathway is a work in progress and can get complicated.

Between High Street and Jack London Square, short segments of the Bay Trail are in place, providing access to the edge of the Oakland Estuary. But these segments are not yet connected.

Visit the trail between Fruitvale and High streets, Fruitvale and Park Avenue, Union Point Park, Embarcadero Cove and Estuary Park. Bike lanes and sidewalks along Embarcadero serve as an inland connection to some of these waterfront destinations.

The trail around Lake Merritt is worth exploring, accessible to the Bay Trail only along city streets. There are plans to eventually connect the trails at Lake Merritt with the Bay Trail at Estuary Park. Visit Jack London Square, the public hub of Oakland’s waterfront and learn about its rich history.

Take a cruise on the Alameda-Oakland Ferry as it runs between Jack London Square, Alameda and San Francisco’s Ferry Building and Pier 39. To reach Middle Harbor Shoreline Park and Portview Park use bike lanes and sidewalks along city streets and be rewarded with breathtaking views.

Continue north to Emeryville along city streets via Mandela Parkway or to the Bay Bridge Trail along the path on Maritime Street.

Crab Cove Visitor Center at Crown Memorial State Beach connects people with the local marine and shoreline life, as well as Alameda history. You can see bay creatures in the 800-gallon aquarium system, use interactive stations to view microscopic animals or get a worm’s view of the mudflats.

The Bay Trail at Jack London Square is a network of promenades and trails that’s become a culinary and entertainment destination, with wonderful outdoor spaces to enjoy drinks and a meal. There are opportunities to shop or just wander and enjoy the activities on the Oakland Estuary. Don’t miss the Sunday Farmer’s Market!