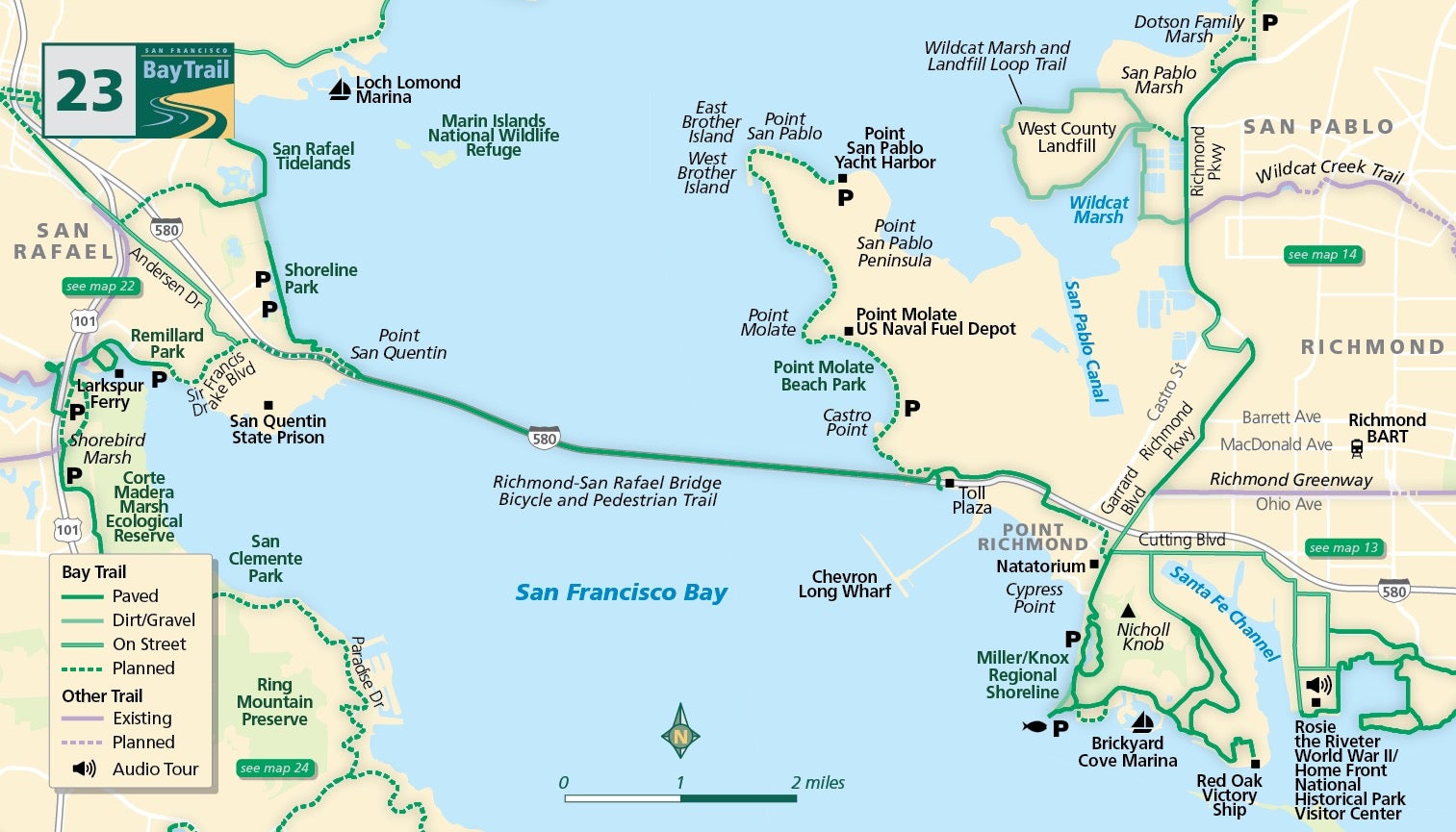 Upcoming Closures: The Richmond-San Rafael bike/pedestrian path will be closed from 9 p.m. on Sunday, February 12, through 5 a.m. on Monday,  February 13 to accommodate monthly maintenance. Bike shuttles will be provided for those impacted by the closures.

In the fall of 2019, the San Francisco Bay Trail added a 4.5-mile separated pathway for cyclists and pedestrians on the upper deck of the Richmond-San Rafael Bridge, connecting trail users in the counties of Marin and Contra Costa for the first time in the span’s 64-year history.

Advocates first began requesting a path for cyclists and walkers several decades ago.

After much work on the part of groups like the Marin County Bicycle Coalition, East Bay Bicycle Coalition (now named Bike East Bay), TRAC (Trails for Richmond Action Committee), San Francisco Bay Trail Project and countless others working with elected officials and agencies on both sides of the bridge, a four-year pilot project began with much fanfare on November 16th, 2019.

Automated bicycle and pedestrian counters have been installed on both sides of the bridge. The number of bicyclists and walkers that use the trail will help to determine if this pathway becomes permanent, is removed, or is only available to trail users during limited hours or days of the week. Scenery from the span is spectacular, providing views of East Brother Island, Point Molate, Point San Pablo, Red Rock Island and Mt. Tamalpais.

New pathways with wayfinding signage leading up to the bridge on the Richmond side make access simple and straightforward.

From the intersection of Garrard Boulevard and Richmond Avenue follow the signs and travel through the streets of Point Richmond to the Richmond-San Rafael Bridge trailhead at Castro Street and Tewksbury Avenue. Improvements from the Marin side are underway.

From the Larkspur Ferry terminal on the Marin County side of the bridge, take the Bay Trail adjacent to Sir Francis Drake Boulevard heading east. The pathway ends before the San Quentin Prison gate, so bikes and pedestrians must share the road shoulder (no bike lanes or sidewalks exist here) for 1.5 miles then exit at San Quentin and hang a quick left on Main Street under the freeway. The path can be accessed at the intersection of Main Street and Francisco Boulevard East, just east of the Richmond-San Rafael Bridge Vista Point.

Several improvements completed in 2021 link the Vista Point with central San Rafael via Andersen Drive. These include sidewalk widening and other upgrades along Francisco Boulevard East from the Vista Point to Grange Avenue, where a new crosswalk provides bicyclists and pedestrians with access to a new barrier-separated path that runs along the Sir Francis Drake Blvd. “flyover” from Interstate I-580 all the way to Andersen Drive.