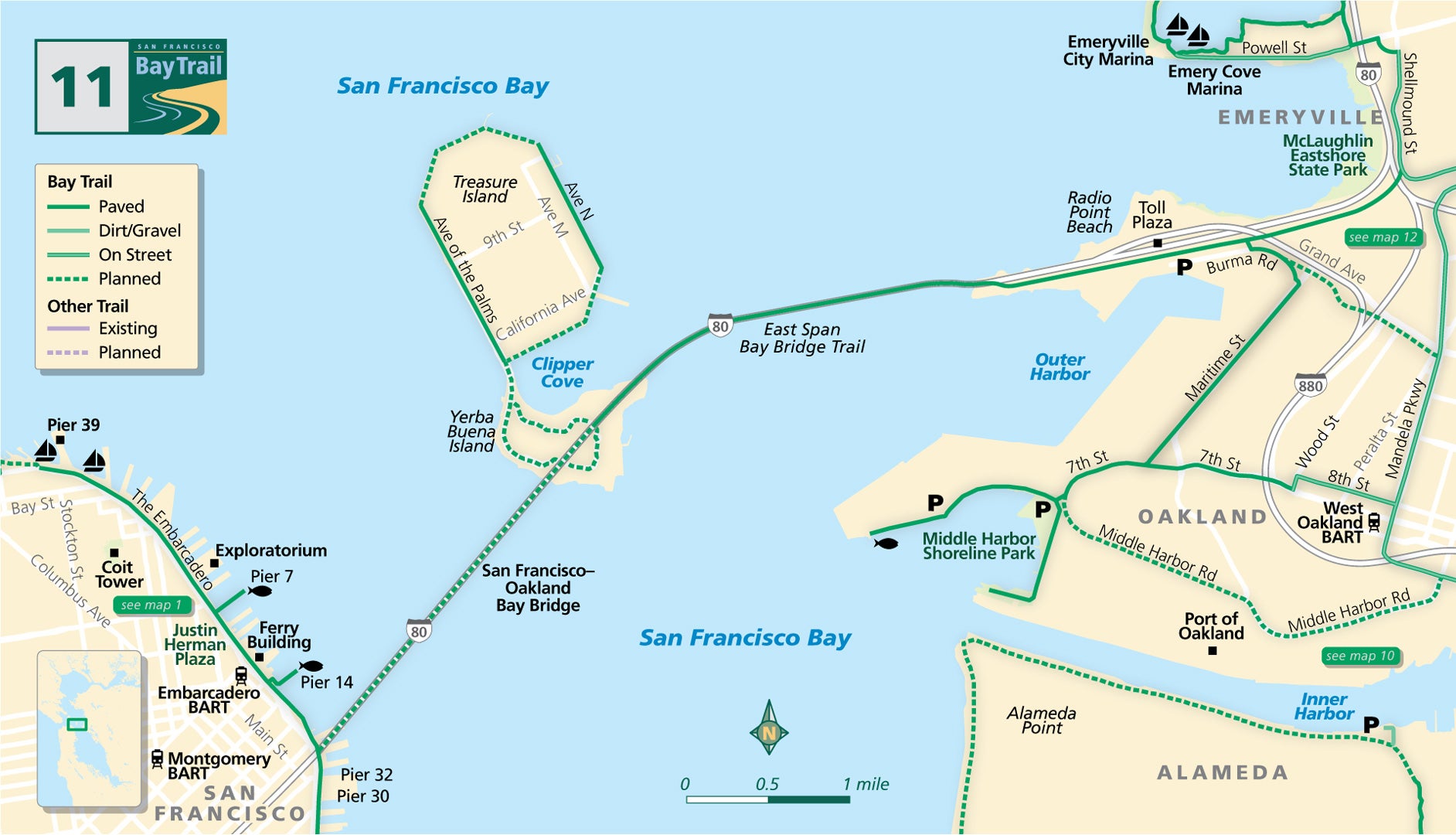 In 1955, the American Society of Civil Engineers honored the San Francisco-Oakland Bay Bridge as one of the seven “Modern Civil Engineering Wonders” of the world.

At first, the bridge carried autos on its top deck, with trucks, buses and two tracks for the Key System rail service on the lower deck. In 1958, the rails were removed and both levels were assigned to motor vehicles.

Today, the bay has been transformed with the new East Span of the Bay Bridge. Rising over the bay between Oakland and Yerba Buena Island, the 2.2-mile span’s self-anchored suspension section and its signature single tower have become an iconic Bay Area image.

Following damage to the original East Span as a result of the Loma Prieta Earthquake in 1989, it was determined that the existing span would be completely replaced. The new bridge opened in 2013 with a 15-foot-wide bicycle and pedestrian path on its southern edge.

Take the four-mile Bay Bridge Trail from the entryway off Shellmound Street in Emeryville to Yerba Buena Island and gaze up at the awe-inspiring tower of the new Bay Bridge.

Where the bridge lands in Oakland, the Judge John Sutter Regional Shoreline welcomes travelers to the East Bay and serves as an entry point for the East Span bridge pathway.

Planning is underway to complete the bicycle/pedestrian connection between Yerba Buena Island and San Francisco via the West Span of the Bay Bridge.

Treasure Island was created with bay fill in the late 1930s, and was the site for the 1939-40 Golden Gate International Exposition — or World’s Fair. Some 4,000 trees and 2 million flowering plants were planted for the occasion. Many of the palms and varieties of eucalyptus are still alive.

Future plans for the redevelopment of Treasure Island include a mix of residential, hotel, marinas, restaurants, retail and entertainment venues — plus nearly 300 acres of parks and open space.

With this project, a new segment of the Bay Trail will encircle the island and connect to the Bay Bridge pathway. Two segments of Bay Trail currently exist on Treasure Island and are worth a visit.

The West Oakland Link is a proposed 1.1-mile-long Class I elevated pedestrian and bicycle pathway that will be part of the Bay Trail. It will connect West Oakland to Judge John Sutter Regional Shoreline and the Bay Bridge Trail.