Opened to the public in 2013, the Bay Bridge Trail carries bicyclists and pedestrians across the majestic East Span of the San Francisco - Oakland Bay Bridge, connecting the Oakland shoreline with Yerba Buena Island. 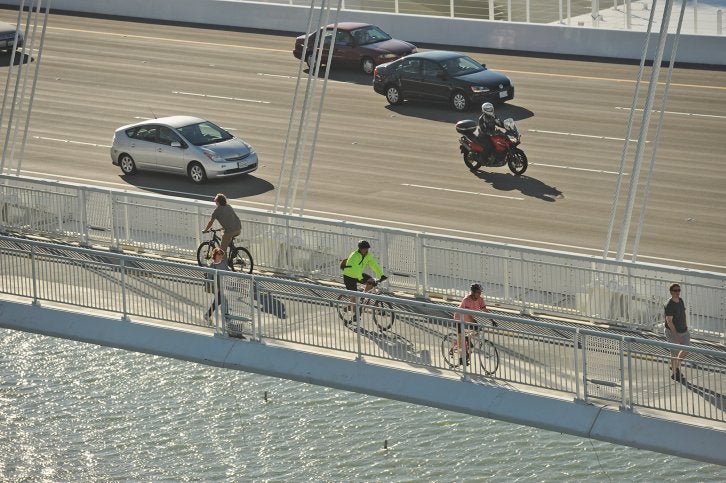 At 15.5 feet, the Bay Bridge Trail is wide enough for two-way bike traffic, with a slice left over for pedestrians. A venting system sucks car exhaust away from the path, while the span’s sleek and tight construction and side-by-side deck configuration — as opposed to the stacked decks on the old bridge — keep traffic noise at a tolerable level.

The well-used path features seven "belvederes," or observation platforms where walkers and cyclists can stop to take in panoramic views of the city, the bay and the surrounding natural environment. The bike and pedestrian path is named after the late East Bay Bicycle Coalition founder and Bay Bridge Trail advocate, Alex Zuckermann. A plaque bearing his name is located on the trail.

To learn more about the Bay Bridge East Span bike and pedestrian path, visit the Bay Bridge Info website. For information about getting to the trailheads by car, public transit, or bicycle, please visit 511.org.

Hours vary depending on time of year. Be sure to check the Bay Bridge Info website for the latest update.

The Judge John Sutter Regional Shoreline (formerly known as Gateway Park) is a new park located in the Oakland at the foot of the eastern span of the San Francisco-Oakland Bay Bridge. This distinct “Gateway to the Bay” connects the East Bay to Treasure Island via the bicycle/pedestrian path on the bridge and opens safe, multimodal public access to the shoreline, with unique vistas of the bay and bridge.

The 22.47-acre park opened to the public in October 2020, and highlights the industry, infrastructure and ecology that have shaped the history of this spectacular expanse of shoreline. One of the most dramatic features of the park is a grand 600-foot long by 40-foot wide observation pier built upon piles from the old Bay Bridge (open from 5:00 a.m. to 10:00 p.m. daily).

Visit the East Bay Regional Park District website for details about the amenities currently available, as well as the history of the park. 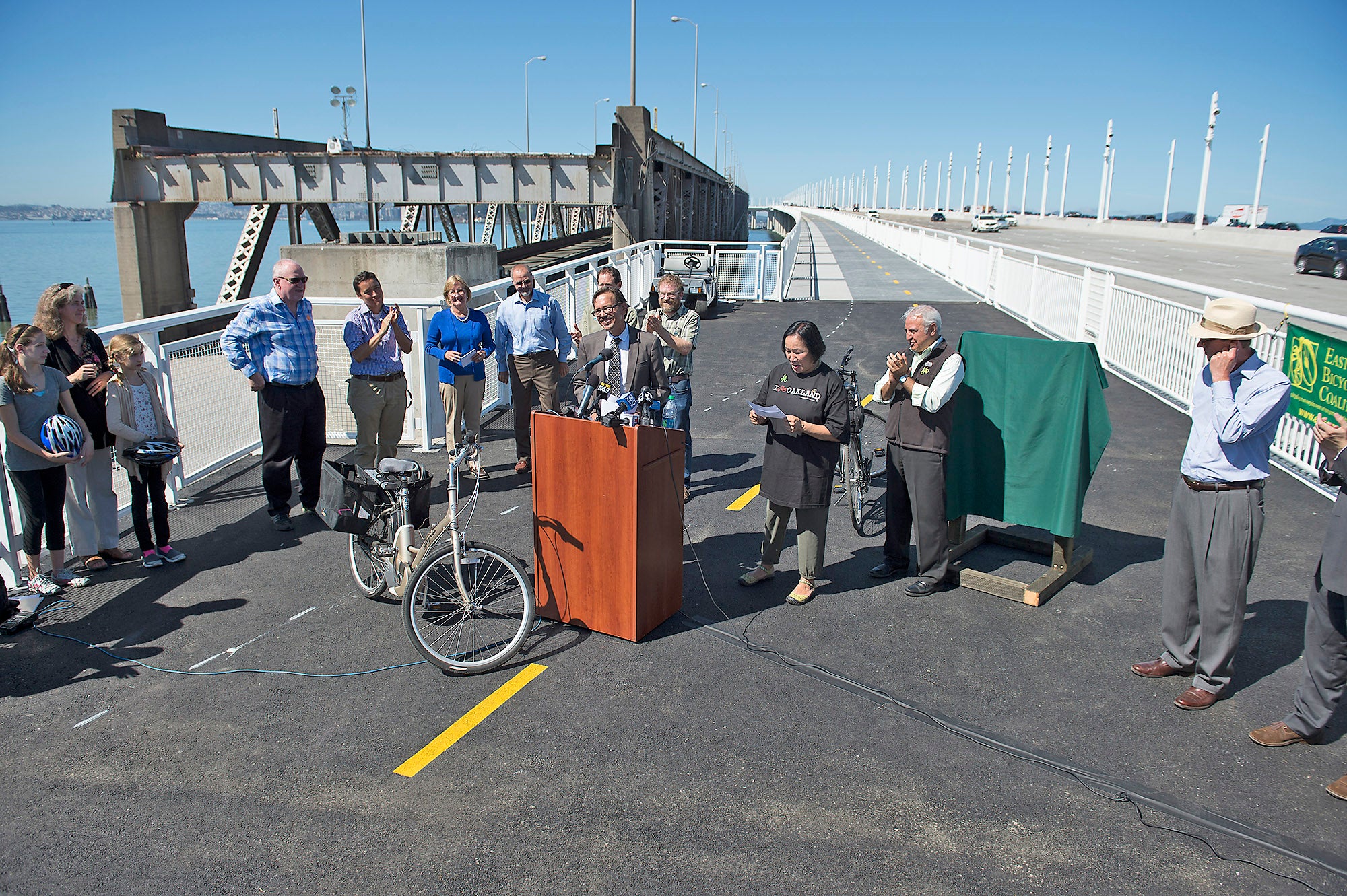 The East Span Bicycle and Pedestrian Path is dedicated in memory of East Bay resident Alex Zuckermann, a city planner by day who also was a passionate bicycle activist. Zuckermann, who passed away in 2007 at the age of 86, was one of the main advocates for the bike path across the new East Span, and for a time was a member of MTC’s Advisory Council.

In 1991 Zuckermann received an award from MTC “for two decades of dedication to bicycle transportation issues.” Thereafter the California Legislature bestowed a much bigger tribute by voting to name the new East Span path in his honor, citing him as a “tireless and articulate advocate” for the path.

Just east of Yerba Buena Island, beneath the new Bay Bridge East Span, the Bimla Rhinehart Vista Point sits atop Pier E-2 of the original East Span, which for 77 years supported the western end of the East Span's cantilever section. The Vista Point, which was dedicated in October 2019 to honor the former California Transportation Commission Executive Director and Toll Bridge Program Oversight Committee member Bimla Gill Rhinehart (1961-2013), provides an unprecedented opportunity to view the new East Span. It is furnished with a 30-foot communal table, amphitheater seating, and flexible performing spaces for community gatherings and other events.

Many of the Vista Point's elements feature repurposed steel from trusses salvaged from the original East Span. These include:

Views from the Bimla Rhinehart Vista Point look out over San Francisco Bay to the Port of Oakland, and the tower and self-anchored suspension portions of the new Bay Bridge East Span. Adjacent to the Vista Point is the former Torpedo Storehouse, which is listed on the National Register of Historic Places and is the last remnant of the former Camp Yerba Buena, a one-time U.S. Army base which sat in this exact location.

Still anchored in the adjacent hillside is the former Pier W-2, the anchorage point where the original East Span landed on Yerba Buena Island.